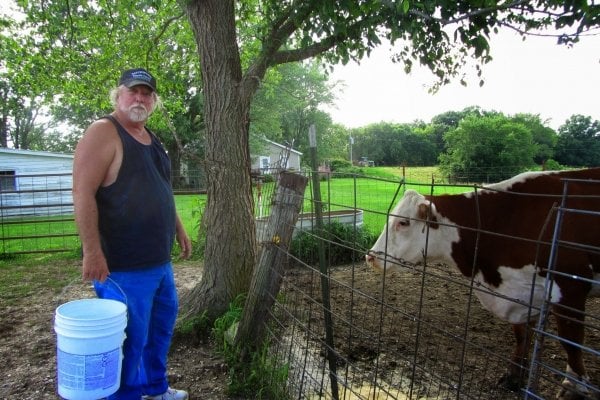 These days, Roger talks about how crisis can so easily lead to fear and division rather than strength in unity. He says that in a dire moment like the farm crisis, if there is not a strong voice saying, “the way that we solve this issue is all of us together, instead of all of us apart,” the community can fracture. MRCC has been that voice in rural Missouri, building a broad and engaged member base over decades. Many of its more than 5,600 member families came into the organization because of one issue and quickly become involved in many other ways. Even in today’s polarized political climate, Roger says, “We get enough people—farmers, rural people, consumers—together… we’ve changed things in this state—things that are unbelievable.” One of those unbelievable victories—given the strength of the opposition—was the 1996 passage of the “Hog Bill,” regulating confined animal feeding operations, also known as CAFOs or factory farms. The law was one of the strongest in the nation at the time, in the early days of factory farms, and retained the right of Missouri counties to have say over siting of CAFOs. In the same period, states like Iowa and North Carolina passed bills stripping this local control, prohibiting county governments from establishing local environmental or public health regulations for factory farms. In Missouri, the factory farm lobby has chipped away at elements of the Hog Bill in the nearly 20 years since its passage, but though lobby groups have tried repeatedly to overturn local control, they have been unsuccessful in the face of farmers and rural citizens organizing with MRCC.

In addition to fighting factory farms and corporate control of livestock production, MRCC showcases an alternative to factory farming in Patchwork Family Farms, a cooperative marketing effort of
independent hog farmers. Patchwork pork, raised on independent farms with sustainable growing methods, is available in markets across Missouri—and as part of eight food coops around the state managed by MRCC. The coops provide over one thousand struggling rural families with high-quality, affordable produce, pork and other staples in areas where access to good food is limited. The food coop program has its roots in the 1986 Chillicothe USDA protest, when a grant from the newly-founded farmer support organization Farm Aid allowed MRCC to do emergency food distribution to the farmers occupying the USDA parking lot. The women at the protest—who Rhonda Perry says “were basically running the show”—said that what was really needed was a larger scale food program to help farmers beyond the protest. In response, MRCC started what was then the only statewide rural emergency food program and ran it until 1992, when they transformed it into a cooperative effort run by farm families and rural citizens.

Pointing to MRCC’s many irons in the fire—near-constant legislative fights against corporate agriculture bills, local, regional and national organizing on issues from Medicaid expansion to livestock to trade deals, and much more—Roger says, “We’ve never slowed down—because that wasn’t on our agenda. It’s easy to say: ‘we didn’t plan on that,'” But for Roger and MRCC, the agenda has instead always been, “We have got to fight tooth and nail for what’s good and right for farm families and our communities. And our members and supporters have always showed up and stood up—they always respond to an injustice or to something that isn’t right.”

Text and photos by Siena Chrisman.