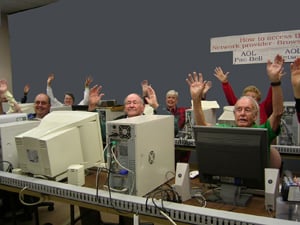 At the Pasco County Library in Florida, the most requested service is not tracking down a particular book nor troubleshooting with a particularly stubborn copy machine, but guidance to complete the Supplemental Nutrition Assistance Program application (SNAP, formerly food stamps). Librarians are unwittingly becoming the new advocates for SNAP, ironically as they watch their own budgets get slashed.

The difficult economic times coupled with the automated SNAP applications have left many people without the tools necessary to access help. In April 2011, the Harold Light newspaper stated that libraries are becoming less about books and more about technology. Libraries are now servicing a large number of individuals who have limited technological skills, including elderly individuals who are in need of social services but have not adapted to the new methods. Many of these elderly people are living alone or away from their families, if they have any left. Most are without transportation and living on their Social Security Insurance (SSI), just scrapping by.  Faced with a world far more technical and less patient, there is a real need for advocates, and librarians have been filling that void.

Frustration can be heard in the voices of the elderly individuals who call the National Hunger Hotline (NHH), a food resource information center that is a core program at WhyHunger. One caller stated: “I keep getting the run around, no one wants to help me… I have all these numbers and I am not getting anywhere. They [Department of Social Services] told me to do it [SNAP application] online but I don’t have a computer.” As more social service agencies turn to computers for their work, more seniors are left without assistance. Only one third of eligible seniors have applied for benefits— two out of every three eligible seniors are currently not registered in the program.

The current budget of most libraries does not allow them to increase staff or the number of computers they host. This phenomenon is not just in inner city neighborhoods; the trend is also seen in wealthier areas of the country. For instance, Greenwich, CT, has seen computer usage in one library go from 250,000 uses in a year to nearly 400,000 uses in a year.

The Library Journal said “the evolution of librarian as information provider to caseworker has multiple and profound implications.” This not only changes the duties of librarians, but requires them to become fluent in multiple agency programs. A number of librarians have expressed concern and anxiety about this change and the lack of preparation that they feel.

Though there is no consensus as to how to deal with this issue on the state or national level, WhyHunger’s National Hunger Clearinghouse has been working tirelessly, outreaching to libraries across the country to inform them of our toll-free national hotline that could ease the burden for many librarians. The NHH staff and volunteers have created a list of more than 500 libraries across the nation to call and inform them of the services provided by the Hotline, including live advocates and a database of over 7000 food resources.