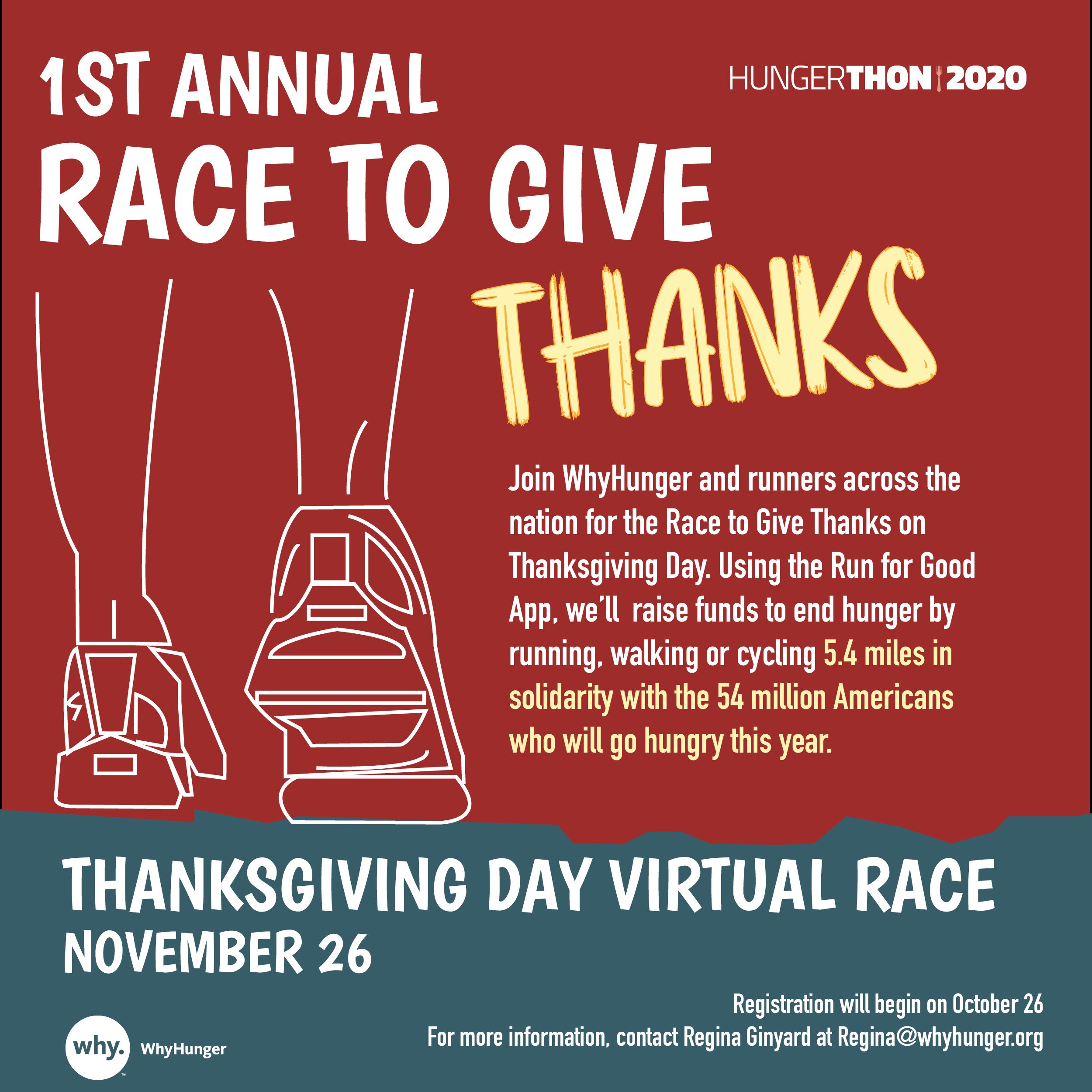 New York (October 26, 2020)—WhyHunger— a leader in the movement to end hunger and advance the human right to nutritious food in the U.S. and around the world—today announced its partnership with Run For Good, a new app linking physical fitness and charitable giving. The initiative includes a virtual Thanksgiving Day race on November 26, at 9am ET, during which participants can run, walk or cycle 5.4 miles in honor of the 54 million Americans who face hunger, while raising critical funds for the cause.

In lieu of typical Thanksgiving fun runs, the Race to Give Thanks virtual run provides a safe and socially distanced opportunity for running enthusiasts to participate and raise funds for WhyHunger’s Hungerthon campaign, the annual holiday drive to solve hunger, raise awareness and build social justice for all.

The Run For Good app allows you to donate directly as well as solicit pledges from your friends and associates for each mile run (or walked/cycled). Run For Good was selected as a TechCrunch 20 Disruptors of 2020 and is available for iOS devices on the Apple App Store.

“With 54 million Americans facing hunger, the need to help raise awareness and funds to solve the hunger crisis is greater than ever. We are thrilled to launch the Race to Give Thanks in partnership with Run for Good to offer families an enjoyable and safe way to participate in their favorite fun run traditions, while giving them the opportunity to give back and make a difference,” said Noreen Springstead, executive director at WhyHunger. “The great thing about this event is that individuals of all fitness levels can get involved and participate to make this holiday season the most impactful one to date.”

“Run For Good is thrilled to provide a quick, easy and fun way for individuals and their friends to support WhyHunger,” commented Jim Conley, Co-Founder of Run for Good. “Our mission is to harness the power of one’s individual fitness activities like running, walking, or cycling to benefit others in need. This goal is especially relevant today when we are all looking to make a positive impact on our community and keep up our own physical fitness regimens.”

Race to Give Thanks is an extension of the partnership’s campaign aimed at ending child hunger, which ran through October 15 and encouraged individuals to get active while raising critical funds to help the 18 million children in the U.S. who face food insecurity.

To participate in the Race to Give Thanks and raise funds to help eradicate hunger visit: Hungerthon.org/Race.

For more information about WhyHunger’s Hungerthon campaign which launched October 20 and runs through the holiday season visit www.hungerthon.org.

About Run For Good
Run For Good (www.runforgood.org) is a fitness tracking app that allows for personal giving based on fitness goals as well as pledges from friends and associates. Launched on iOS in February 2020 Run For Good was founded by former and current industry executives from Google and Twitter. The platform combines their passion for physical fitness and commitment to charitable giving. The founders have deep experience in technology, education, and philanthropy, with over 20 years of Silicon Valley experience between them.