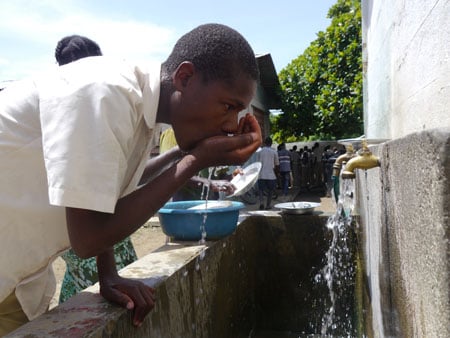 Photo: A student in Haiti’s central plateau enjoys a drink from the newly-built water cistern that has allowed the Bassin Zim school’s agriculture program to flourish, providing healthy meals for students through a partnership with MPP and WhyHunger. Photo Credit: WhyHunger

While the world food crisis is frequently linked to rising food and fuel prices, the impact of industrial-scale agrofuels, and sometimes to climate change, perhaps the most insidious and still largely overlooked danger facing us concerns water. The world is experiencing a water crisis; freshwater resources are dwindling, water supplies are being polluted, and corporations are increasingly controlling access to water. To fully understand and address the food crisis, it is necessary to view it through a water lens.

Poverty and Water
Without water there is no life, and the world’s poor experience this daily. I vividly remember at the 2004 World Social Forum in Mumbai (Bombay) standing in a long line for the bathroom, and a poster on the door read, “Hurry Up! 2.4 billion people are waiting to use this toilet!,” referring to the 2.4 billion people without sanitation. Another poster said, “Your urine is cleaner than our drinking water!” 1.1 billion lacked clean water. The water crisis is at the heart of global poverty; it affects health, education, and survival. As Maude Barlow writes in her book Blue Covenant: The Global Water Crisis and the Coming Battle for the Right to Water, “More children are killed by dirty water than by war, malaria, HIV/AIDS, and traffic accidents combined.”

Food Security and Water Access
Growing food depends on the availability of water, and with the world’s top ten rivers polluted or running dry, freshwater systems are losing their ability to support human, animal and plant life. Rapid population growth in some of the most water-scarce regions of the world raises questions on the carrying capacity of nature. We know that food insecurity is not caused by a scarcity of food since we produce enough food to feed everyone, and we know that hunger and population are related in complex ways. Food security, however, is directly linked to water security, whether in water-short California which produces fruits, vegetables and dairy for the rest of the United States; in densely populated areas of India and Northern China where surface water has become severely polluted; or in the world’s megacities where according to the UN, “by 2030 more than half the population of these huge urban centers will be slum dwellers with no access to water or sanitation services whatsoever.”

Food Production and Irrigation
A crucial question on food and water security is how we produce food, and how we use water for irrigation. Seventy percent of all the freshwater that humans extract from rivers, lakes, and aquifers is dedicated to agriculture. We know that modern industrial agriculture and factory farms pollute groundwater, create lagoons of toxic wastewater, and send runoff into streams and rivers. Worldwide, the use of flood irrigation is extremely wasteful: of the 70 percent of freshwater that goes onto the fields, only half of that touches the crops. A blue revolution in agriculture would replace wasteful flood irrigation with drip irrigation, and recover water harvesting models, both ancient and modern, to retain water within the hydrological cycle. The vast majority of the world’s farmers still rely on rainfall to grow their crops. They lack reliable access to irrigation services, while more powerful farmers can use bribes, kickbacks, fraud, patronage and political influence to get the water they need.

We Need A New Food And Water System
The usual “solutions” to the food and water crisis are more of the same. Massive new irrigation investments in dams and irrigation canals in Asia, North America and Australia are underway to counter global food shortages. A New Green Revolution for Africa is launched, assisted by biotechnology, oblivious to the ecological and social disasters of the first Green Revolution. A global food system run by multinationals ships food around the world, and destroys self-reliant food systems and local ecosystems.

The alternative is a food and water system built on local ecosystems and local capacities, one in which communities restore watersheds and water resources, wetlands and forests, replenishing underground reservoirs, as well as halting surface and groundwater pollution. This food and water system would promote agroecological farming, and advocate for food sovereignty, which includes “a democratic conversation about food, about how it should be grown, how shared, how distributed.”

This would demand what Maude Barlow calls a global covenant on water, a “Blue Covenant.” This would have three components: “a water conservation covenant from people and their governments that recognizes the rights of the Earth and of other species to clean water, and pledges to protect and conserve the world’s water supplies; a water justice covenant between those in the global North who have water and resources and those in the global South who do not, to work in solidarity for water justice, water for all and local control of water; and a water democracy covenant among all governments acknowledging that water is a fundamental human right for all.”

Peter Mann is Director Emeritus of the Global Movements Program.