Wade in the Water sung by St. James Missionary Baptist Church of Canton

When I would hear Wade in the Water, a famous black spiritual, even as a child I would be over come with a deep sadness. A profound sense of loss that often moved me to tears. A few years ago I shared that with an elder I met in passing while in Jackson Mississippi, and she laughed. Struck by the sharpness of her chuckles, I was paralyzed. Within seconds, my paralysis quickly shifted to an intense urge to laugh as well. I let out a small chuckle then the flood gates opened and I laughed so hard I could not breathe. After about a minute or two that elder looked up at me and said, that is what the song is about. It is about a profound sense of hope even in the most dire of odds. So this post is about hope, is dedicated to the legacy of Charity Hicks, and was created in solidarity with Water Warriors all over the world. 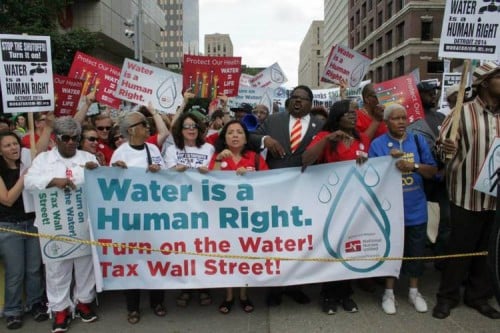 Let’s start with an agreement.

Let’s say we agree that water is a human right. In the most primitive sense of that statement, that we undeniably agree we need water to live, and everyone, regardless of race, class, gender, and free of where you live or what language you speak, has the right to water as essential to human survival. Let’s deepen that agreement by saying that the denial of water as a human right is at its core an act of violence. To deny water as a human right, denies communities, women, men and children the right to live, and as such communities all over the world have been resisting the denial of that right for centuries. From Bolivia to Mauritania, from New Mexico to Detroit, communities have resisted the theft and privatization of public commons like water by building their collective power and waging love.

This World Water Day, it is even more critical that we not just stand, but act in solidarity with those water warriors who are  waging love for the right to water. The reality is no matter where the struggle ensues, injustice anywhere is injustice everywhere.

“I Do Mind Dying”- By Kate Levy (This is a rough cut of a documentary-in-progress. Sound, pictures and content are not final. Local Music by Will See, Sacramento Knoxx, Invincible. Sourced video art by Halima Cassells.)

Detroit Water Struggle Visual Timeline: Working with WhyHunger to support our allies and partners in the struggle, I’ve been able to spend time in Detroit over the last year talking with activists and organizers and listening to the stories of those on the front lines. This visual timeline was created to help share those stories and amplify the voices of the water warriors in Detroit.

For a fuller timeline visit //www.d-rem.org/timeline-the-story-of-detroits-water/#more-649

The water struggle in Detroit has been going on for quite some time. Some say it started in 2008 following the financial crisis when jobs were lost at record numbers and thousands of residents lost their homes through foreclosure. Others believe it goes as far back as 1701, when the City of Detroit was founded. Still, in a time when privatization paradoxically exists with increased resistance to racial and economic inequity, it is clear that now is the time to act. So what do we do? Well the people of Detroit are starting with demands, so hear they are.

Lastly, I would be remiss if we didn’t take a moment to remember, honor, and hold space for our dear ancestor, sister Charity Hicks. For those of you who did not have the privilege of knowing her in all her mighty power, Charity, a native of Detroit was a fierce activist, leader, movement weaver and friend. She was a founding member of the People’s Water Board, and was a lead organizer in the actions and community responses that erupted in response to the city’s unjust water turn offs. Charity was killed by a hit and run driver while in New York, to speak about the Detroit Water Shut Offs. We lost her too soon but her legacy lives on in the efforts of so many Detroiters who carry her message and work. Charity taught us that movement are about love, and in order to win we have to wage love, and for that we thank you and we miss you dearly.

“It was only and ever love.” — Nayyirah Waheed