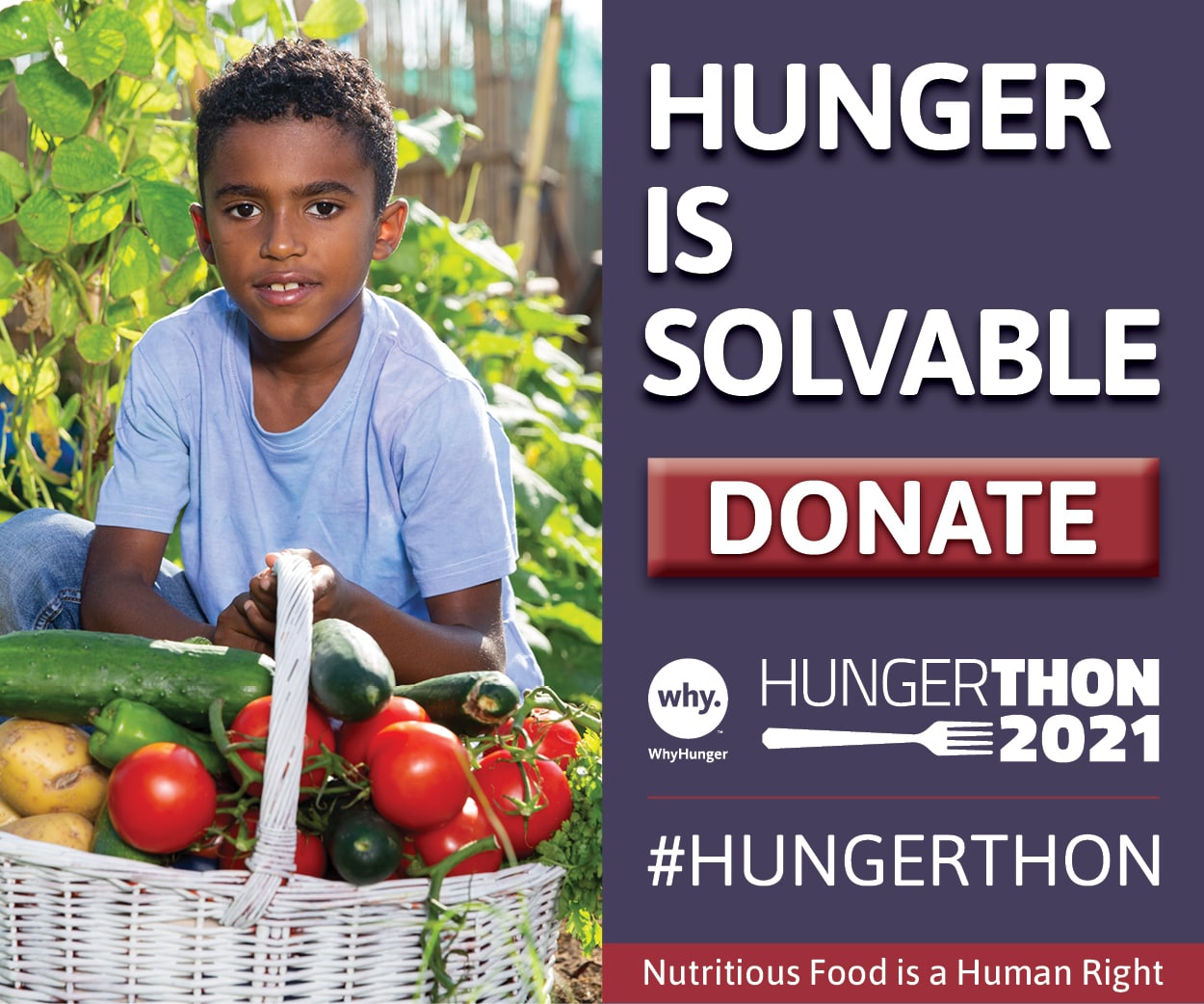 New York (November 1, 2021) – With 38 million Americans – including 1 in 6 children – struggling with food insecurity, it’s more important than ever to take action to end hunger. Today WhyHunger – a leader in the movement to end hunger and advance the human right to nutritious food in the U.S. and around the world – launched its 36th annual Hungerthon fundraiser and awareness drive, a multifaceted campaign that runs through the holiday season.

A Hungerthon donation moves the needle beyond charity to strike at the root causes of hunger, nourishing people now and fueling long-term solutions that help create social, racial and economic justice. Funds raised will help communities to safely grow, store and distribute nutritious food to people in immediate need, organize and advocate for long-term solutions to hunger locally, and build power nationally to end hunger.

The Hungerthon 2021 campaign elements consist of:

“At its very core, hunger isn’t about a lack of food. It’s about lack of access, lack of a living wage, and lack of social justice,” said Noreen Springstead, executive director at WhyHunger. “Hungerthon is one of the many ways we help fill the void by raising critical funds that go directly back to our programmatic work to tackle the root causes of hunger, nourish our communities and protect the most basic human right to nutritious food for all. The power of this campaign – in bringing together our incredible radio partners, sponsors, celebrity ambassadors and thousands of supporters across the country year after year continues to amaze me!”

Since launching over three decades ago, Hungerthon has raised millions of dollars in the fight to end hunger and invest in community-driven solutions to build social justice for all. To find out more information and support this year’s Hungerthon, visit Hungerthon.org and follow the conversation on social media via #Hungerthon and #GiveThanksgiving.

If you or someone you know needs help, call the WhyHunger Hotline at 1-800-5-HUNGRY, text your ZIP Code to 1-800-548-6479 or visit WhyHunger.org/FindFood to get connected to local emergency food providers like food pantries or soup kitchens across the U.S! WhyHunger helps veterans, seniors, families and working people around the country find food in their neighborhoods as well as government programs like SNAP year around and in times of crisis like the COVID-19 pandemic, natural disasters, and climate events. Last year, WhyHunger connected over 1 million people to nutritious food.

About WhyHunger
Founded in 1975 by the late Harry Chapin and radio DJ Bill Ayres, WhyHunger believes a world without hunger is possible. We provide critical resources to support grassroots movements and fuel community solutions rooted in social, environmental, racial and economic justice. A four-star rated charity by Charity Navigator, with highest ratings for excellence in fiscal management accountability and transparency, WhyHunger is working to end hunger and advance the human right to nutritious food in the U.S. and around the world. 90 cents of every dollar raised goes directly to programmatic work. Learn more at whyhunger.org and follow us on Facebook,  Twitter and Instagram.

About SiriusXM
Sirius XM Holdings Inc. (NASDAQ: SIRI) is the leading audio entertainment company in North America, and the premier programmer and platform for subscription and digital advertising-supported audio products. Pandora, a subsidiary of SiriusXM, is the largest ad-supported audio entertainment streaming service in the U.S. SiriusXM and Pandora’s properties reach more than 150 million listeners, the largest addressable audience in the U.S., across all categories of digital audio – music, sports, talk, and podcasts. SiriusXM’s acquisitions of Stitcher and Simplecast, alongside industry-leading ad tech company AdsWizz, make it a leader in podcast hosting, production, distribution, analytics and monetization. SiriusXM, through Sirius XM Canada Holdings, Inc., also offers satellite radio and audio entertainment in Canada. In addition to its audio entertainment businesses, SiriusXM offers connected vehicle services to automakers. For more about SiriusXM, please go to: www.siriusxm.com.

About Audacy
Audacy, Inc. (NYSE: AUD) is a scaled, multi-platform audio content and entertainment company with the country’s best radio broadcasting group, a leader in virtually every segment of audio, and America’s #1 creator of original, premium audio. Audacy engages over 170 million consumers each month, bringing people together around the news, sports, podcasts and music that matter to them. Learn more at www.audacyinc.com, Facebook (Audacy Corp) and Twitter (@AudacyCorp).

About iHeartMedia
iHeartMedia New York owns and operates WAXQ, WHTZ, WKTU, WLTW, WWPR, WOR and WWRL, and is part of iHeartMedia. iHeartMedia, Inc. [Nasdaq: IHRT] is the leading audio media company in America, reaching over 250 million people each month. It is number one in both broadcast and digital streaming radio as well as podcasting and audio ad tech and includes three business segments: The iHeartMedia Multiplatform Group; the iHeartMedia Digital Audio Group; and the Audio and Media Services Group. Visit iHeartMedia.com for more company information.