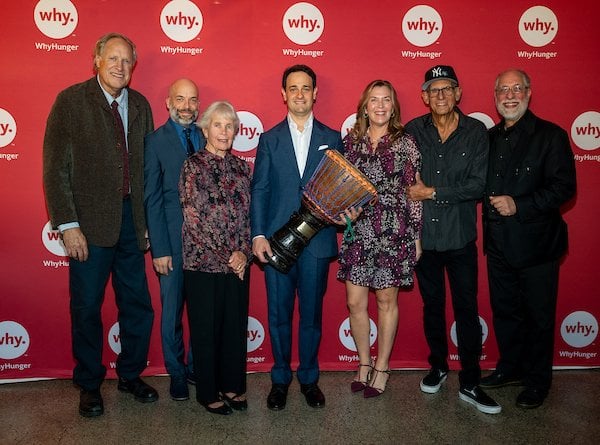 New York (October 20, 2021) – WhyHunger’s Come Together event took place at the City Winery in New York City last night, honoring Tony-winning producer and Davis Polk partner Brian Resnick with the Harry Chapin Humanitarian Award. Emceed by Pete Dominick, the event gathered over 350 guests including Liberty DeVitto, Dom Famularo (co-creator of Drum Together), Tom Chapin, Jen Chapin, and featured a special performance by The Weeklings, in celebration of Brian and his efforts for WhyHunger’s Drum Together. The campaign raised $585,994 to support WhyHunger’s work globally to end hunger and advance the human right to nutritious food.

“Harry Chapin dedicated his life and music to ending world hunger. His vision lives on through WhyHunger’s mission and in people like Brian, who he so deeply inspired,” said Noreen Springstead, executive director, WhyHunger. “We are honored to recognize Brian for his steadfast commitment to ending hunger with such energy, creativity, passion, and joy and for his remarkable gift in creating such a compelling campaign in Drum Together.”

“Bringing together so many amazing musicians for WhyHunger’s Drum Together was an absolutely incredible and inspirational experience,” added Resnick. “I’ve always been moved by Harry Chapin’s altruism. He walked the walk and paved a path for so many artists to do the same. I’m humbled to earn this award in his memory and legacy and look forward to continuing my support of WhyHunger’s work.”

With 90 cents of every dollar raised going directly to programmatic work, funds raised from the Drum Together campaign and Come Together event will fuel transformative community-led solutions across the U.S. and around the globe that advance the human right to nutritious food for all.

Special thanks to event sponsors Ani and Brian Resnick, Cindy and Tom Secunda, Davis Polk, and PJT Partners. To learn more about the event, Drum Together and WhyHunger’s work, visit www.whyhunger.org.

Editor’s Note: Additional images from the Come Together event are available upon request.