On Wednesday, we brought you the story of Shore Soup Project, a one-year-old organization in the Rockaways, Queens, New York, founded in the wake of Hurricane Sandy. Shore Soup Project began as an emergency food provider–by providing food in an emergency. As the needs of the community changed in the months after the hurricane, the organization’s focus grew to include providing long-term “emergency” food to those who needed it while beginning to build a more resilient food system in the community.

Today, we talk further with co-founder Robyn Hillman-Harrigan about the role of emergency food providers during a disaster–and long after.

WhyHunger: What should be the role of emergency food providers (EFPs) in a community? What do they need in order to advocate for healthy food instead of accepting whatever food they are donated?

Robyn Hillman-Harrigan: I think empowerment is something that comes from within. If EFPs start to be proactive and empowered with the decisions that they are making, that’s going to empower other people in the community. If you really want to inject people with that life force, give them really good healthy food and help them understand where it comes from. Help them be part of the process of bringing in food and distributing it in the community. The food system is really complicated–but if we all educate ourselves about it, we can improve it. 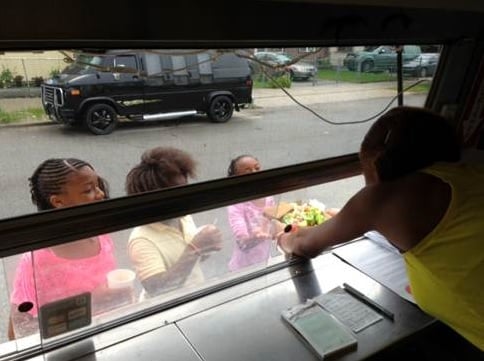 Let’s all help each other; let’s all be advocates for healthy food together. Then we start changing the way we think about food, changing the way we think about what we need in our community in terms of food, and how we can get that food into our community. Let’s start thinking about that; let’s start thinking about creative ways to empower the community to understand the system and be part of the system. Share your concerns, share your innovations and have them cross pollinate with others. That where the empowerment and inspiration comes from.

We have two summer youth employment workers who live in the community.  They are 15 years old. They have ideas and are interested and can be empowered by seeing that this started from nothing.  It about changing the way people think about food, sharing, transactions and cost–and also bringing that access to healthy food.

WH: How do you deal with donated food that is not so healthy?

RHH: We didn’t get it because we told people we weren’t taking it. We were really explicit about it.

WH:  Did you feel like you were missing out by not taking whatever food was offered, particularly because you were in an emergency situation?

RHH: No. If it was healthy food, we would take it, but we weren’t going to take just anything that was offered to us–for example, we were offered a lot of dehydrated milk, canned fruit and a lot of MREs (meal, ready to eat). People in the community were upset to get that kind of food. No offense to the Red Cross, but people were very upset about the food they offered. They didn’t like it; they would say, “it’s too salty,” “I can’t have stuff with this much sodium,” or “I have diabetes and I can’t have this much sugar.” This was part of the dialogue at the time. People were getting cheese sandwiches on white bread and would say “I’m cold and I’m hungry; this food isn’t doing it for me.” People were not trying to be rude, but in reality there is this assumption that if you’re poor and hungry, you’ll take anything–that you have no choice or preferences. In fact, that is the opposite of reality. That is the time when it is most important to have a choice. So much has been stripped from you, but you still have your dignity and you still have your choice–and if that is respected, you are going to appreciate it.

My advice to EFPs is that it might seem like a quick fix to take anything, but if you hold out and make those choices you can get really good food just as well and for free. If you give away food that is already going bad or that wasn’t of the highest quality to begin with, people notice. They don’t like it and it doesn’t make them feel good or healthier.  The whole point of providing food to people, for me, is to nourish them to be healthier.  It has to be about helping people get through the day by giving them nourishing food. I’d rather find the people that understand our model and understand what we are trying to do and are willing to work with us. Everything we get is organic or local, fresh and it’s just been picked. 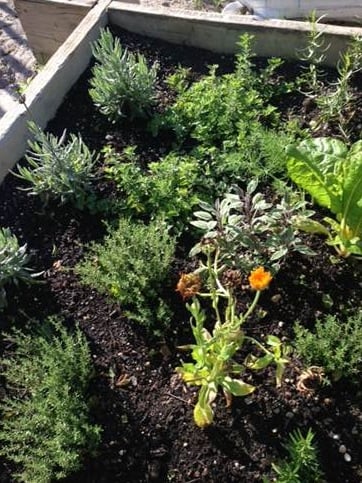 We don’t want to just maintain the status quo; we want to create a better system for people. That’s why we build this community garden on 92nd Street, from the ground up. There was nothing there and now it’s a thriving community garden, with members who have plots and grow vegetables and compost, when they didn’t know anything about any of this six months ago. But they are excited to learn. We’re going to grow another garden next season, to keep educating people about healthy eating and giving them the opportunity to grow their own food. We’re making it sustainable by bringing in the CSA and the Youthmarket. It’s all about sustainability; it’s all about making it easier for you to eat healthy food affordably. That’s what the Shore Soup Project is about too, with the pay-what-you can Food Truck, and everything else. Let’s work together to be able to share this healthy food.

WH: What do you think is the change in mindset that is needed for EFPs to move away from the charity model?

RHH: I think the pay-what-you-can model is really good– it’s a good way to fundamentally change the system. I think money is a real problem in the emergency food system because there is a constant strain of resources.  Maybe the grants won’t be renewed or maybe there will be major cuts to the Farm Bill. There is always a fear of running at a deficit. This sense of a money crunch creates fear and a sense of absence or shortage–a sense of scarcity. If you are already experiencing scarcity yourself, it can be hard to alleviate someone else’s sense of scarcity.

If you can instead experience wealth in some way, whether it’s tangible wealth or generosity, that will help to shift things. From the beginning, our project didn’t have money, but we always believed that we would. We always thought, “it will come and we’ll be fine, it will happen”–and then it did happen. It seems like it’s about faith, but it’s not about faith, it’s about hard work. But you have to have some trust in community; you have to believe in community. You have to believe that people want to help each other and will help each other, given the opportunity. People do and people will, and if you set up a structure within which people can help each other and work together, people will come and join. But if you don’t believe that, you won’t create the structures, change won’t happen, and your doubts will be confirmed. You have to change your mentality.

The Shore Soup Project is holding a benefit on Wednesday, October 23, at The Bowery Hotel in New York City, featuring food from local chefs, local beer and wine, and a silent auction. Tickets here.