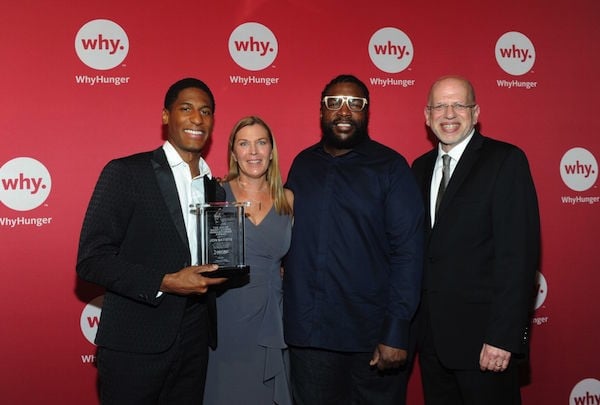 This article was originally written by Ilene Angel and published by the Huffington Post. To see photos from the event click here and to read the official 2017 WhyHunger Chapin Awards press release click here.

Founded in 1975 by the late singer/songwriter Harry Chapin and his friend, radio DJ Bill Ayres, WhyHunger, now in its 42nd year, was created to end hunger by addressing the root causes of social injustice and poverty that perpetuate it and by creating community access to affordable, nutritious food.

Never has there been a time since the organization’s inception, when there was more need for that than now – a sentiment that was both palpable in the crowded ballroom and also noted by Pete Dominick, the talented and funny host for the evening.

Had there not been accompanying video, I myself would have been hard pressed to believe a thriving farm in the middle of such an urban setting. It was an inspiring testament to what is possible when committed people join together for the greater good of each other.

Jon Batiste, this year’s ASCAP Harry Chapin Award recipient, brought his band, Stay Human, with him and was introduced and joined by The Roots Questlove.

In his moving speech that preceded the music, Batiste said, “Music at its highest is of service.”

And Batiste means what he says, because earlier in the evening, he decided on the spot to auction off a private piano lesson to the highest bidder to raise money for the organization.

Then Batiste and his band, Stay Human, proceeded to “serve us” their beautiful blend of spirited song and instrumental music, venturing out into the ballroom and engaging everyone in song and dance.

The evening was capped off by the tradition of closing with members of the Chapin family and the award recipients leading everyone in attendance in a singalong of the late Harry Chapin’s “Circle” song.

As everyone departed in good spirits, it seemed to me that for all the challenges that this new America we are living in present to us, it also presents us with the opportunity to make a differences in unprecedented ways, as these award recipients did.

This unique time we are living in provides us with an opportunity to be part of the solution, to, once and for all change things systemically, and to be in community with one another while doing so.