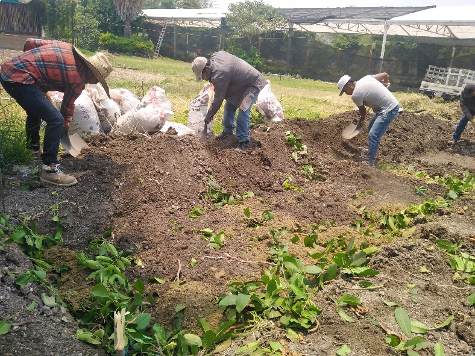 By Betty Fermin and Joao Fonseca

Industrialized agriculture has been depleting the environment of carbon and releasing it into the atmosphere for decades. It contributes 23% of total greenhouse gas emissions and it has turned about 50% of organic matter from the soil into carbon dioxide that is released into our atmosphere. This method of agriculture depletes and destroys the natural resources that are necessary to produce food. And, while sustainable agriculture as an alternative to industrial agriculture has been a practice for more than 30 years, the concept of regenerative agriculture has recently emerged and is being used by small-scale farmers alongside corporate-owned mega farms to describe agricultural practices that are beneficial to the environment.

Policymakers, philanthropists, and scientists are calling for regenerative agriculture to be scaled up as a means of sequestering carbon in an attempt to cool the planet. The risk in the adoption of a single term by so many different sectors is that the complexity of the practices associated with it becomes diluted and easily harnessed to push through agendas and ideologies that are often contradictory. Simply put, regenerative agriculture has become a “buzz” word that broadly captures “climate-friendly” agricultural practices in absence of the necessary debate, dialogues and discovery of the economic, social and cultural conditions essential to food production methods that feed people, nurture communities and protect the planet.

Regenerative agriculture, according to Regeneration International, is a method to combat climate change “by rebuilding soil organic matter and restoring degraded soil biodiversity – resulting in both carbon drawdown and improving the water cycle.” Regenerative agriculture, according to this definition, is not a proactive method to safeguard the land, rather it improves the land by building soil anew. “It is dynamic and holistic, incorporating permaculture and organic farming practices, including conservation tillage, cover crops, crop rotation, composting, mobile animal shelters and pasture cropping, to increase food production, farmers’ income and especially, topsoil.”  In short, regenerative agriculture is designed to “form or create again” the ecological building blocks of agriculture after they’ve been stripped from the land.

Most alarmingly, perhaps, is the way in which regenerative agriculture has also grabbed the attention of the corporate world. As a new wave of more informed consumers are beginning to demand sustainable and ecologically-produced foods, agribusiness has begun to heavily invest in designing and advocating for ecological approaches. The issue with this investment in and advocacy of regenerative agriculture is that corporations are latching on to the “technological definition” of regenerative agriculture which they then market – in its most simplistic and reductive understanding — to consumers. Marketing products as “organic,” for instance, relies on consumers making a collective assumption that the food they are eating is healthier and protects the environment – never mind that over the past three decades organic farms having gotten larger and larger and turned to mono-cropping (decidedly NOT ecologically sustainable) in order to meet the demand. Corporations can co-opt terminology, such as organic, and greenwash their response to consumers’ demands, allowing for a business-as-usual approach. In attempting to sell a particular benefit such as the promise of a greener planet to consumers, corporations rely on a reductive narrative of regenerative agriculture, obscuring the fact that soil health alone is insufficient to combat climate change.  In the same way that a one-legged stool will not stand, if the social and economic systems that govern how food gets from field to plate are not regenerated alongside soil in ways that bring justice and equity to food producers and food chain workers, then the sustainability of a greener planet is not guaranteed. The corporate and technical-centered definition leaves out the practices of actual farmers who understand and are demonstrating that ecological methods of farming are context-specific and differ from one local farm to the next in order to sustainably bring back soil health and resilience.  One size does not fit all can be a complex and difficult concept to market.

One of the main food giants behind this approach is General Mills. They have publicized that they would apply “regenerative agriculture to 1 million acres by 2030 – about a quarter of the land from which it sources ingredients in North America”. They have launched a pilot project for oat farmers and a self-assessment app for anyone interested in implementing regenerative practices. Their three broad outcomes are: soil health, above-ground biodiversity, and economic resiliency in farming communities. In their rhetoric about developing “robust scientific methodologies for measuring these outcomes,” there is no reference to people, communities, or self-determination. This is an example of agribusiness co-opting terminology, greenwashing it and profiting from it. They are selling to the public the falsehood that, by investing in regenerative agriculture, they care about the health of the planet. Other corporations are also jumping on the regenerative agriculture bandwagon. Danone, Kellogg, Nestle and a dozen others have joined the coalition The One Planet Business for Biodiversity (OP2B), focused on “scaling up regenerative agricultural practices; boosting cultivated biodiversity and diets through product portfolios; and eliminating deforestation / enhancing the management, restoration and protection of high-value natural ecosystems.” Land O’Lakes, the dairy products giant, has announced a new initiative, the soil conservation effort, to help bolster “sustainability on 1.5 million acres of U.S.-grown corn. Using best-in-class technology and sustainability solutions from Land O’Lakes SUSTAIN, Midwestern corn farmers will be supported to more effectively target and measure the impact of efforts to protect the environment.”

A glaring gap in these claims about the benefits of regenerative agriculture is any discussion of just labor practices, farmer-to-farmer sharing of knowledge, bio-diverse small farms and local markets dotting the landscape, access to land, and advocacy for rights-based policies that put those who produce, distribute and consume food at the center. In short, what’s missing is the debate about food sovereignty. Big Food and Big Ag are co-opting the language of regenerative agriculture to describe climate-friendly technologies for the purpose of marketing strategies that appeal to current public opinion such that they can maintain or increase profits. Meanwhile, regenerative agriculture is a long-standing practice by Black and Indigenous farmers, like Pie Ranch Farm, a 418-acre Black-led incubator farm, offering farmers the opportunity to establish their own regenerative enterprises, utilizing more ancestral ecological methods  to create “a landscape-level ecosystem plan that integrates forest, riparian corridor, native grasslands, perennial, annual crops.” Another example is La Grange farm in Indiana, a small independent farm that has begun to utilize regenerative agriculture and farming in order to employ 30 workers full-time and produce about a million pounds of pastured pork and poultry each year.

What is missing from the regenerative agriculture conversation today, are the set of principles and practices that differentiate local farmers from corporate, industrial agriculture and the organizing strategy that scales out these practices farmer-to-farmer, community-to-community embedded in the struggle for food sovereignty.

Growing food with care for and in balance with other natural systems is a principle lived by folks surviving on the land rooted in ancestral knowledge and solutions by the people. What is missing from the regenerative agriculture conversation today, are the set of principles and practices that differentiate local farmers from corporate, industrial agriculture and the organizing strategy that scales out these practices farmer-to-farmer, community-to-community embedded in the struggle for food sovereignty. The mainstreaming of the term regenerative agriculture leaves small farmers, landless peasants and communities of color using the same articulation and discourse as corporate and industrial-sized farms. In reality, their goals and practices of regenerative agriculture are worlds apart, even if the rhetoric is not. The danger of co-option by such largely different groups is that the true meaning and purpose of this term can be lost in translation, disarming marginalized farmers and communities from a method of growth and empowerment while fueling profit growth for agribusinesses.

Co-optation of terms by powerful institutions – corporations and industry, policy makers, universities, among them – is not a new phenomenon.  And yet it’s important to be vigilant in order to flag when terminology is being adopted in order to greenwash the goal of capital gain.  In many ways, in the corporate world, regenerative agriculture is the new “climate smart agriculture.” Like regenerative agriculture, this term was coined to provide a market-based solution to mitigate climate change without addressing its root causes. ActionAid International’s Teresa Anderson wrote in an article for the Guardian:  “Some organizations call their own agroecological (organic) approaches climate-smart. Indeed, such practices really are effective. However, other groups point out that the same agribusinesses that have done the most to cause climate change and make farmers and food systems vulnerable, are now also using the term, and re-branding their activities as climate-smart.”  Social movements for food sovereignty rejected the term “climate smart agriculture” coined by Big Ag and its institutional supporters some years ago.  Regenerative agriculture, one could argue, is rapidly becoming its replacement.

For the moment, a solution that offers the best hope for countering the reductive tendencies of agribusinesses looking to capitalize on the public’s concern about climate change is Agroecology. Agroecology, an agricultural method based on the traditional knowledge of those who cultivate the land and utilize its resources without causing harm to our environment, is still firmly in the hands, hearts and mouths of local farmers. It is a set of practices, a science and a pathway towards food sovereignty and climate justice. Agroecology is keeping farmers on the land and nourishing Indigenous knowledge because it is largely driven by farmers and Indigenous people organized in social movements such as La Via Campesina International. Climate justice, for example, will be achieved when we are able to address the structural issues of who accesses and controls land, water and food. That is why Indigenous and peasant families around the globe are practicing it. Amidst a history of violence, colonization and prejudice that has kept folks off their land, agroecology is strengthening social movements and is offering solutions to people while restoring the ecosystems. The centering of communities of color, women, youth and queer folks is integral to agroecology. A strategy in the struggle for social justice and the unfolding of social, political cultural, economic, and nutritional possibilities of, for and by rural and urban communities. And this should be part of the strategy as well for regenerative agriculture, but unless communities reclaim control over the term and clearly define what it means to the defense of their territories and in the articulation of their ideas and values, it won’t.