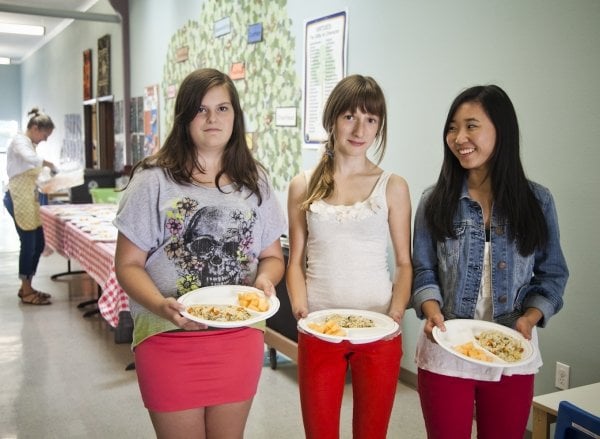 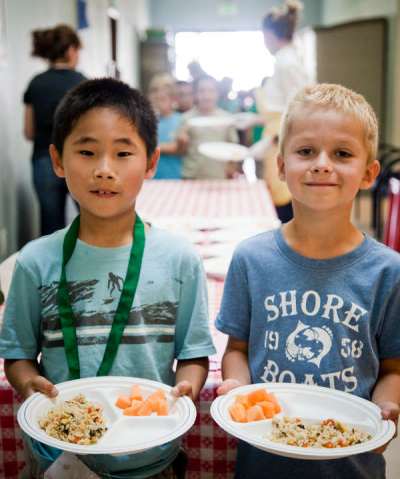 Recently, with the 2010 USDA’s Community Food Project (CFP) grant, FareStart has moved further down the food security chain, developing “Serving Farm Fresh to City Schools” program. That’s how a four-year-old ended up with a plate of egg-fried rice and bok choy produced in FareStart’s kitchen by FareStart staff and trainees. The goal is to create a sustainable market that supports local farmers (45% of the school lunch food is sourced from Washington farms) and improves school lunch nutrition for 250,000 children.

It’s not easy going from pizza and chicken nuggets to sweet-potato quesadillas and three-bean quinoa chili. Kids are picky eaters. But they are also voracious learners so with each meal comes overt (lessons in the classroom) and subtle (“Ooh, doesn’t that quesadilla look good?” from the volunteer dishing out the food) prompts toward understanding the benefits and appeal of healthy, local food.

Another one of the Holy Grails in the food security quest is to bring state institutions and day-to-day large scale meal providers like school districts under the same tent as local producers and local-food distribution networks. FareStart has a strong foundation upon which to make this leap. As seen in New Mexico with the effort made by Don Bustos’ American Friends Service Committee, solidifying the connection between local farms and school institutions gives a powerful voice to food security ideals. Once schools are relying on local food producers, both the farmers and the children’s sustainability are more secure. Who can argue with feeding our children right?