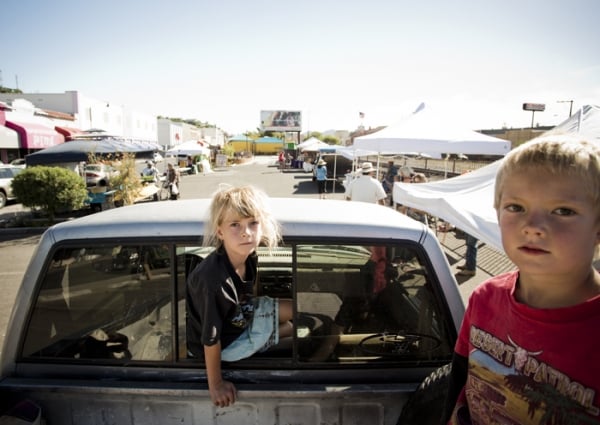 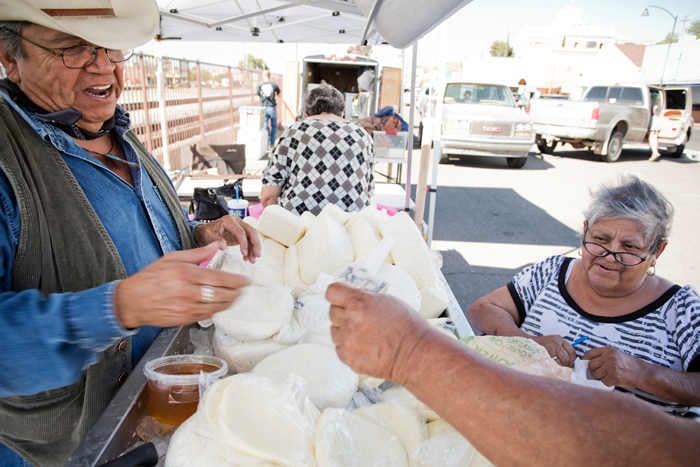 It’s worth moving beyond the products to the vendors at the Nogales market.

There’s husband-wife team of Jim McManus and Tina Bartsch of Walking J Farm. Their two kids, Maggie, 7, and Colm, 6 entertain themselves in the back of the family’s old pickup. Jim and Tina used to live way out in the desert, nine miles from the border, in the hills outside Patagonia. They ran a horse outfitting and guide business. But life was isolated and remote and becoming more unsettling with each drug smuggler or ATF vehicle they saw passing through the ocotillo and cactus outside their window. So they traded the ranch for a 72-acre farm in Amado, AZ. And they sold the horses and bought cattle and pigs.

Now Walking J Farm raises grass-fed beef and heritage hogs, and their two acres of market produce supports a thirty-plus member CSA. They sell at four markets each week, this Nogales one being the youngest.

“We do pretty well selling up in Tucson,” says Jim, “But we want to cultivate a customer base down here in Nogales. It’s closer for us so less carbon footprint in transportation, but we also want to share our product closer within our own community.” 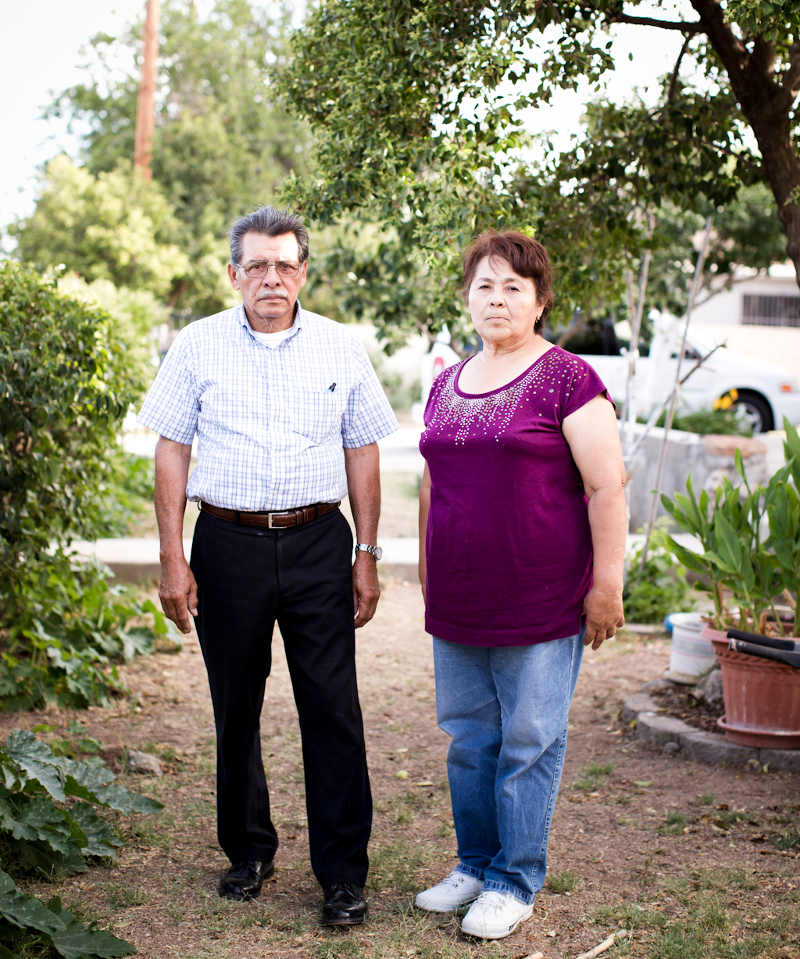 Basically, Tucson has plenty of farmer’s markets and high-end butchers and Whole Foods. Nogales does not. So this market is as much about exposure and developing consistent consumers as it is about a space for the vendors to sell. It takes time.

“I’ve been through a lot of new markets in the last four years,” Jim says. “They are popping up everywhere these days. But as a vendor you often struggle for a while, making $40 per day at times. It takes time to build the base of customers. We’re doing ok here.”

Cesar Martinez sells a similarly high-end item, handmade pure cream, queso fresco, queso cocido. Cesar was a chef for decades. He catered for Hollywood actors and movie sets from southern Arizone to Vegas to Los Angeles. He has a camera-catching grin himself and he dresses to match the part of borderlands rancher. Now, in a sort of retirement, Cesar makes cheese as he learned from “friends across the line” who worked alongside him in kitchens. He keeps a ranch full of cows and milks thirty per day. People call and order the cheese, picking it up at the ranch and Cesar delivers it or brings it to the parking lot of the grocery store in Nogales and sells it (illegally).

Now, with the market, he can set up shop and people can come to him, both his loyal customers and newcomers who don’t know to call his ranch for the best cheese in southern Arizona. His partner María de Jesús Covarrubías shares the booth with him, selling mesquite honey.

“I get my normal customers here, but I don’t have to drive all over delivering it,” says Cesar. “And while I’m out here, friends from across the line come to say hello.”

The market began in April 2012, but the concept for a market had been gestating within the circles of the Mariposa Community Health Center (MCHC) for years. Susan Kunz, director of the health center, and Yvonne Delgadillo of the Nogales Community Development Corporation (NCDC) saw the region’s food insecurity as an opportunity to improve health and develop a small-scale local economy through food and a market. In 2010 they applied jointly for a Community Food Project (CFP) grant, with some local networking support from the newly formed Somos la Semilla (a grassroots food security coalition initiated by WhyHunger). But they did not get the CFP. Their plan was deemed too broad and large-scale throughout the county.

With help from Somos la Semilla and WhyHunger, Kunz and Delgadillo refocused their goals and objectives on the most food insecure part of the region, the city of Nogales. It worked and they received a three-year CFP in 2012.

“We knew we wanted a market in downtown Nogales,” says Kunz. “We wanted something more sustainable than just a food drop. But we wanted the market to attract low-income residents, not just high-end boutique folks.”

So they allowed for EBT voucher payments and they advertised and educated about the market and healthy food accessibility and preparation through their established network: Nogales Housing Department, MCHC, NCDC, the Community Food Bank of Southern Arizona, and Somos la Semilla.

The market is progressing slowly. They have a perfect location at the end of the bustling commercial main street where most of Nogales’ non-big-box retail lives. But it takes a while to attract the townspeople to a new food shopping form.

In the market’s far corner booth, Tarenta Baldeschi, sells giant carrots, spinach, squash, kale, and other greens from Avalon Organics, a farm an hour north of town. Terente has lived with the intentional eco-community for over twenty years. His son was raised in it and he plans to stay within the community, a life-long commitment. Their farm raises produce, fruit, meat, dairy, and even wheat. It is almost the exclusive food source for the one-hundred-member village.

Avalon also runs a program connected to the economic-health efforts of MCHC and NCDC. Four of MCHC’s home gardeners from Nogales, many of whom already have some growing skills and who cultivate vegetables and fruit trees in their small city lot yards, take classes at Avalon to learn more about growing food for their homes. They are taught about selecting a site, nursing seedlings, proper water use, appropriate plants for various seasons, and foods that traditionally grow in the Sonoran climate. The long-term idea is for the individual gardeners enrolled in the educational program to return to their families and share the knowledge with their neighbors, schools, and churches.

And that’s how I meet Socorro Garcia. She was at the market to buy food and see Tarenta at the Avalon stand. Socorro has been a member of the Garden Club training group since it began in November 2012. She offers to show me her fruit trees and vegetable plants growing around her house. So I ride with her and her husband to their home, up the hill a few blocks behind the main drag that wraps through Nogales downtown. 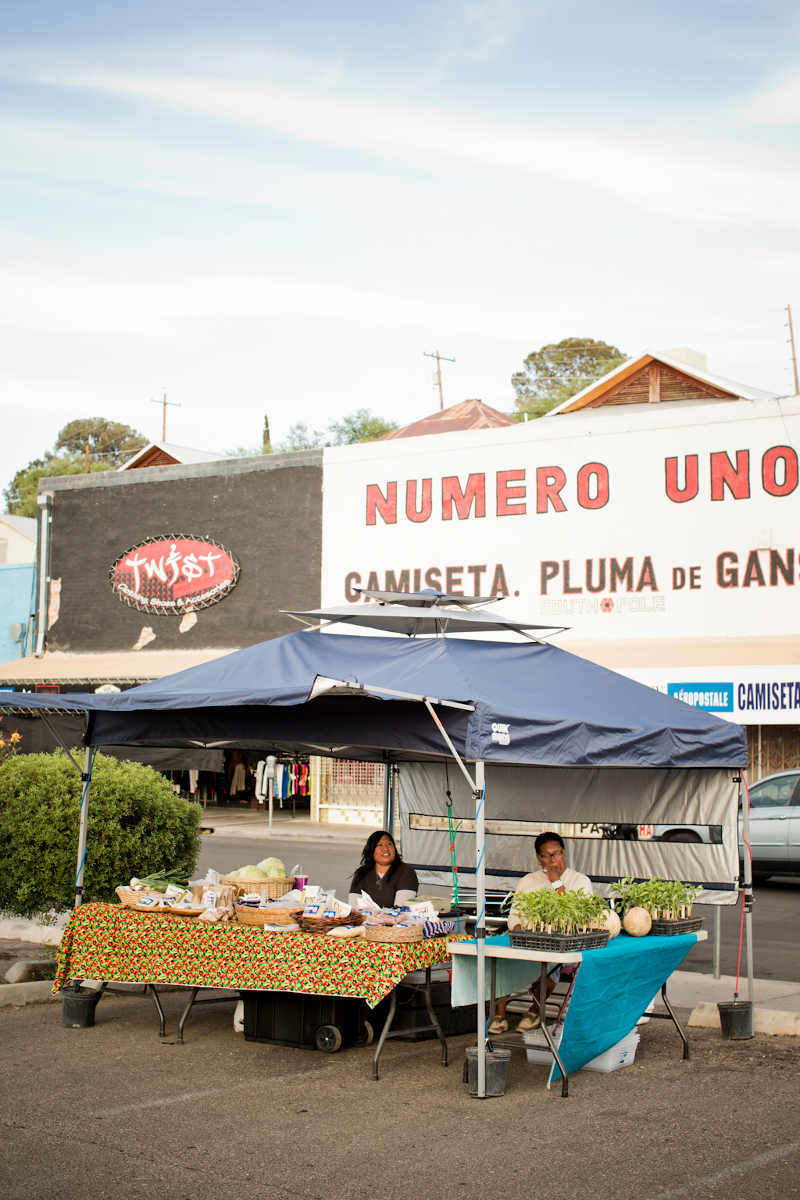 The Garcia’s live in a modest one-story home. A concrete and wrought-iron fence encircles the small, dirt yard. There’s no green grass lawn. Not in the Sonoran Desert where rivers run for only a few months of the year. But there are little squares of dark brown dirt. In black-ink cursive handwriting, Socorro has spelled “beets” and “zanahorrias” (carrots) in the concrete beside the different plots. They grow spinach, cabbage, onion, garlic, lettuce, zuccini, tomato, red pepper, and bell pepper. They have a ten-year-old apple tree and they are fighting to save a lemon tree. The Garcias stand over a small fig tree beside the narrow driveway like parents admiring a crawling toddler.

Socorro knew how to grow from an early age, but when the Health Center outreach folks came by her house and asked if she wanted to participate in the garden apprentice program, she jumped at the opportunity. There is a small stipend involved, but Socorro beams as she talks about learning the proper times to sew, to harvest for each fruit and veggie. How to prune her fruit trees. Where to find and how to use organic, affordable fertilizer.

Before we climb back in the car to return to the market, Socorro points out a long, ground-hugging vine. She says she pulled a watermelon from the vine last year and brought it to her church. She says it was huge and that everyone there wanted learn how she grew it.