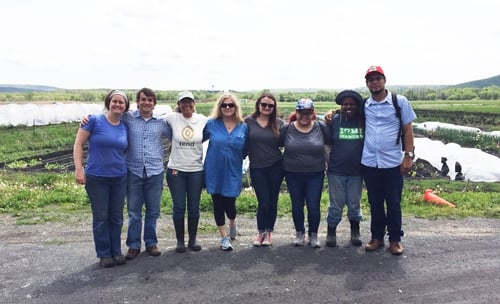 It was a bright and sunny Saturday morning in mid-May when we piled into the back of my colleague’s car and made our way out of New York City’s sprawl. Joining the team from WhyHunger was Raul Amorim, the Coordinator of the Youth Collective of the Brazilian Landless Worker’s Movement (MST), who was in New York to accept the WhyHunger Harry Chapin Award on behalf of the MST. As the conversation flowed from English to Portuguese to Spanish and back we talked about the weather, our work, and how excited we were to reach our final destination. We crossed the Hudson River and navigated up the highway North-bound, rolling down our windows and taking in the fresh air. You could see that spring was beginning to be pushed out by summer in the lush greenery that paved our way towards Chester, NY. Winding through the quaint village of Chester, we came upon a beautiful farm valley, slowed the car and stepped out onto the rich soil of Rise & Root Farm. 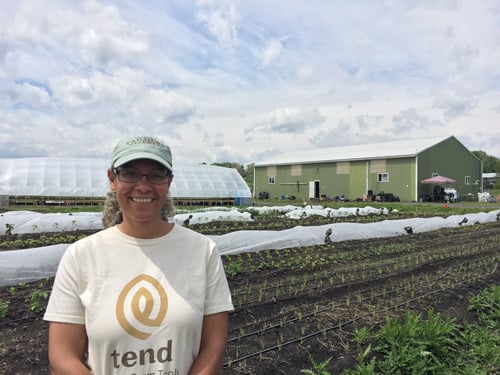 In its second season, Rise & Root is a beautiful 3-acre cooperative farm owned and managed by Karen, Lorrie, Michaela Hayes and Jane Hodge with a mission focused on food and social justice. The four women – all experienced urban farmers and social justice activists – took GrowNYC’s Beginning Farmer Program together in 2012 and began crafting a shared vision of continuing their food justice work by growing food and community beyond the city boundaries. They began looking at land and weighing their options, settling on a partnership with the Chester Agriculture Center, whose mission is “conserving prime farmland while putting it to its best use: growing clean, local food using organic management practices.” They signed an affordable 30-year lease, and began their journey.

Karen explained how their experience of growing food in cities had led them to experiment with new techniques on the farm, “We have been using raised beds and drip irrigation and laying down biodegradable black plastic for the weeds – all of these practices from urban gardening. And now some of the other farmers are incorporating these ideas!”

All their food is grown organically, without GMO seeds, through mostly hand-scale and semi-mechanical techniques. “We have a walk behind tractor,” explained Lorrie. “We grow sustainably, organically and for local markets.”

Karen went on to describe the importance of agroecologically and shared learning, “I talk to the elders to lean and hear their stories of how they used to grow without chemicals,” said Karen.

In the fields and green house they are growing tomatoes, peppers, lettuce, kale, cabbage, cilantro, garlic, kohlrabi, radish, carrots and so much more.

Keeping true to their social justice mission, they sell the produce in different markets so it can be accessible to all, including the La Familia Verde farmer’s market in the Bronx, founded by Karen in 1998, at Manhattan’s Union Square Market and to some NYC-based restaurants. This year they are looking to sell locally in Chester.

While I was there to finally get a chance to see Karen and Lorrie’s farm in action, Raul’s purpose, and the goal of WhyHunger in setting up this trip, was much deeper. Talking with small scale farmers and learning how farming, food, social justice and activism intersect and play out in the everyday life of American farmers was his focus. Along with sharing information on the lives, struggles and success of the farmers and organizers of the MST. Karen and Lorrie were more than happy to reciprocate.

The conversation was rich and pointed as we made our way through a packed greenhouse and storage shed, across the fields and into the refrigerated room where freshly picked produce was waiting for the markets. Raul, Karen, Lorrie and the WhyHunger team talked about GMO seeds and access to land, how organizers can shift power and collective action can make change.

As Karen and Lorrie talked about racism and discrimination in the fields and farming policies in the U.S., Raul compared their stories with successes and challenges in Brazil.

“Feeding the planet is very important and dignified labor, and the people who work the land have to be able to live a dignified life,” Raul offered.

“As an African American woman, I see what is happening with farmworkers in this country as a new kind of slavery – it’s not even new really, it’s repeating in our history,” explained Karen. “How do we change that piece, the mechanisms that makes that possible? How can we change the mentality that people can be exploited for labor?”

“MST is beginning to face the same questions,” Raul replied. “We hope and foster the idea of workers coming together to share land as a social function for all society.”

“Right now in Brazil there are fewer farmers than in the colonial period,” Raul explained that land concentration is growing and control by international companies is increasing. “People’s control of the land is critical in this moment. Right now as capitalism is in crisis there is a ‘gold rush’ to buy land because it’s a solid investment.”

“Right! This conversation is the basis for why we need agrarian reform!” said Raul, though he was quick to qualify – “but not like they kind you have in the U.S.” He continued, “Land was democratized in Brazil, but not for the people, to open new boarder for developers and to squash the resistance from the people who live there.” 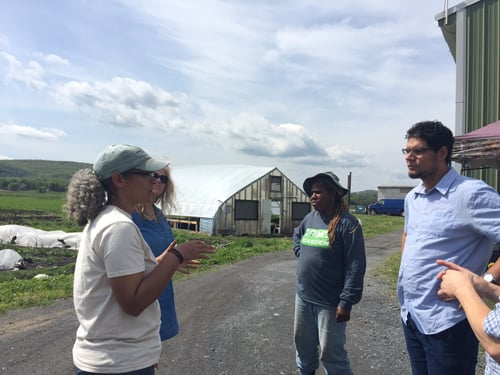 The conversation dug deeper into food sovereignty and the power of corporate agriculture. But it ended with hope, and how hope is growing on the fields of Rise and Root and the other small farmer collectives working in Chester and beyond. How hope is growing in the success of the MST, who have organized rural families to reclaim 42 million acres of unused land for 350,000 families in order to grow food for themselves and their communities. How they have training thousands upon thousands of farmers in agroecology, organized and empowered women and youth, provided political education to resist seed patenting, developed markets for locally-produced food, and built schools in rural areas.

“We need research and support for this type of agriculture,” explained Raul. “We need a different type of logic that nourishes cultivates the land and ourselves. The MST is open and interested in building relationships with farmers around the world – just like you.”

As our visit ended and we headed into town for lunch, I was sure that this exchange of ideas, learnings and shared analysis would not end that afternoon. My trip upstate was a reminder that the farmers, activists and social movements that are working to build a just, hunger free world must come together on a farm without borders.