Some good news yesterday from our friends in Brazil–after 20 years of grassroots-led direct action to win title to their land, the Landless Workers Movement, better known as MST, has succeeded in their struggle. Our partners at Grassroots International work closely with the MST, and bring us more on this story of victory for the people by the people.

After 20 years of struggle and waiting, the families camped out in the municipality of Prado, in the extreme south of the Brazilian state of Bahia) have finally received legal title to their land. The roughly 5,025 acres of farmland has the capacity to support about 280 families.

For members of the Landless Workers Movement (MST), the Rosa Prado land symbolizes much more than a deed to land. It represents 20 years of struggle and resistance by families who endured many hardships. 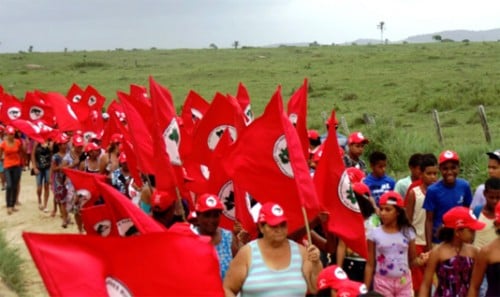 For Evanildo Costa, the regional director of the MST, this land rights victory represents the struggle for agrarian reform throughout Bahia. “It’s been two years since even a single hectare of land has been reclaimed in Bahia. This victory will energize the struggle of all the landless workers in the state,” he said.

In celebration, the settlers held a march from near the settlement to MST’s regional headquarters, to represent the difficult road they walked during their years of encampment–and the solidarity that the families found in each other and from allies. On their arrival, the families were greeted by friends and partners of the MST, activists from other settlements, camps and regions.

A celebration ritual made ??reference to the history of Camp Rose Meadow, recalling difficulties, honoring the militants who were part of the process of organizing the camp and the comrades who participated in the construction of the settlement, and remembering those who died before the land title was awarded.

The encampment at Rose Meadow began with the first occupation of Rose Meadow Farm on August 16, 1993. Since then, the families have suffered 19 eviction injunctions.

Despite difficulties such as living in make-shift shacks and scarce food, the settlement families continued to resist. According to Brazilian Congressman Valmir Assumption, “After 20 years of struggle, today we can say that this land belongs to the working class. This achievement shows that we have no other way to win our rights to land but by occupation and resistance. And now in this same way that we have demonstrated a successful organizing model, we need to challenge ourselves to become a model for sustainable agricultural production, education and organizational development.”

A version of this article originally appeared on Grassroots International’s blog.