If you’ve picked up a newspaper, checked your twitter feed or watched late night TV in the last few weeks, you’ve heard about the newest report on climate change and how it affects our food system. Here are a few articles that caught our eye recently… 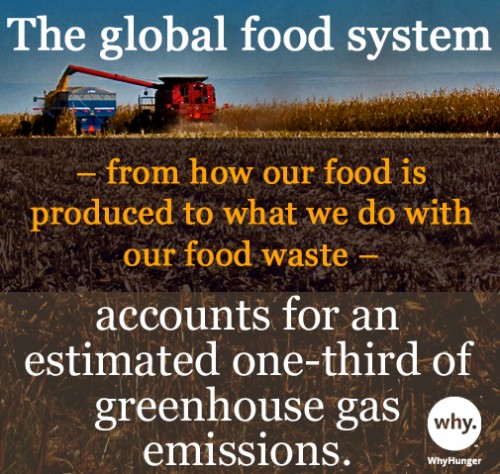 1. California Farmers: Drill, Baby, Drill (for Water, That Is)

How does California continue to produce so much food despite its most severe drought in decades? Food politics writer Tom Philpott reports that industrial agriculture is mining precious underground aquifers to support monocrops. These fossil groundwater supplies are emptying faster than they can regenerate, causing experts to warn of “potentially dire consequences for the economic and food security of the United States.” In the Imperial Valley, a natural desert that provides 80 percent of U.S.-consumed winter vegetables, water is irrigated from the Colorado River, which is expected to drop by as much as 45 percent by 2050 according to climate change models. What will this mean to the to 30 million people along its path who rely on the river for drinking water and  farmers in Arizona and Mexico who need that water to irrigate cropland? Read the full article on Mother Jones: California Farmers: Drill, Baby, Drill (for Water, That Is).

2. What Cuba Can Teach Us About Food and Climate Change

When the Cold War ended, the Cuban government was unable to afford the advanced technologies of modern agriculture. Cuban peasants mobilized to restructure the land for small-scale agriculture and develop agroecological practices to farm it, and are now facing challenges to maintain the hard-won model. Raj Patel writes about how we can use the knowledge gained in Cuba to address the global problem of climate change and diminishing resources. Read more on Slate: What Cuba Can Teach Us About Food and Climate Change.

3. Don’t Panic, Go Organic: The IPCC Report Should Be a Wakeup Call for Climate-Smart Food

The Intergovernmental Panel on Climate Change (IPCC) recently released a report about the worsening risks of climate change. Though many members of the media have taken a doom-and-gloom attitude to the report, Anna Lappé uses it as a “wake-up call” to take action for a more resilient food system. Lappé’s most recent book, Diet for a Hot Planet, discusses the food industry’s contribution to climate change and how sustainable agriculture can help reduce the effects of global warming. Read her article on Civil Eats: Don’t Panic, Go Organic: The IPCC Report Should Be a Wakeup Call for Climate-Smart Food.

The global food system accounts for approximately one-third of greenhouse gas emissions. Learn more on our Food Security Learning Center topic on Climate Change and the Food System, which digs into the specifics of what causes these emissions and how agroecology can ease the effects of global warming while feeding the planet.

Did we miss something? Let us know in the comments.