This spotlight is a feature in a series of the USDA Community Food Project Competitive Grant Program (CFP). Grantees are doing some of the most innovative and collaborative projects to change local and regional food systems. WhyHunger’s Food Security Learning Center — also funded by a CFP grant — has recently begun to profile these organizations through dynamic stories and pictures, to give a real flavor of what the projects look like and how they’re accomplishing their goals. Up today: Athens Land Trust, in Athens, Georgia. We had the pleasure of meeting folks from Athens at last week’s CFP Project Directors meeting in Washington, DC.

Granted in 2010, Athens Land Trust created a  network of community gardens, including an intergenerational garden at the Athens Community Council on Aging; a market-based garden in a low-income community; and satellite gardens in low-income neighborhoods in Athens-Clarke County, GA, where the poverty rate is 33.3%. The overarching goal of their project is to provide healthy, nutritious food for low-income families (including children, seniors, and minority populations) by providing opportunities to grow their own food and market the remainder for income. 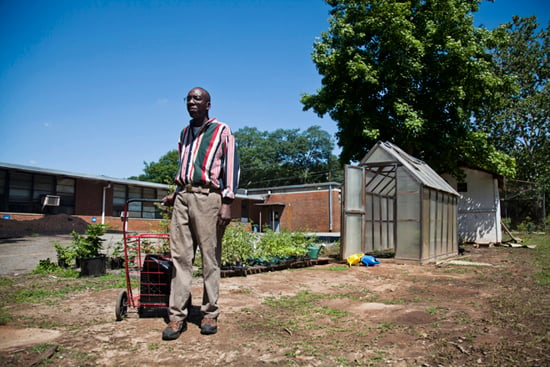 Four piles of jet-black dirt sit in the concrete courtyard of a former Athens, GA elementary school. The windows of the school are dark, vines climb the brick walls, and weeds grow in the cracks of the pavement. In segregationist times, African-Americans attended the school, formerly West Broad School. In 1903 the principal began a garden with the students so that they could take food home to their families. He offered cooking and agriculture classes in the evenings for adults. The school is no longer in use by the county, but the piles of black dirt outside the old classroom represent a full-circle return to the school’s empowering role in the community.

On the old ball field, lettuces and cucumbers and squash and watermelons grow. Silas walks past the field, rolling his two-wheel grocery cart behind him. Silas lives nearby in a public housing project of small apartments. He’s picking up a giant bag of black dirt for the little patch of tomatoes and squash he’s planting in the apartment’s raised bed. The additional food will supplement Silas’ diet, much of which comes from the Food Bank. Silas gets the starts and the soil for free from this school, Athens’ first community market garden project.