This spotlight is a feature in a series of the USDA Community Food Project Competitive Grant Program (CFP). Grantees are doing some of the most innovative and collaborative projects to change local and regional food systems. WhyHunger’s Food Security Learning Center — also funded by a CFP grant — profiles these organizations through dynamic stories and pictures, to give a real flavor of what the projects look like and how they’re accomplishing their goals. Today: Community Action Duluth.

Community Action Duluth mobilizes the Duluth (Minnesota) community to build assets that prevent poverty, create equality and strengthen its social fabric. The organization received a Community Food Project planning grant in 2010 and established Duluth Urban Acres Coalition,  which examines barriers to healthy food security for low-income Duluthians and how to best address them. 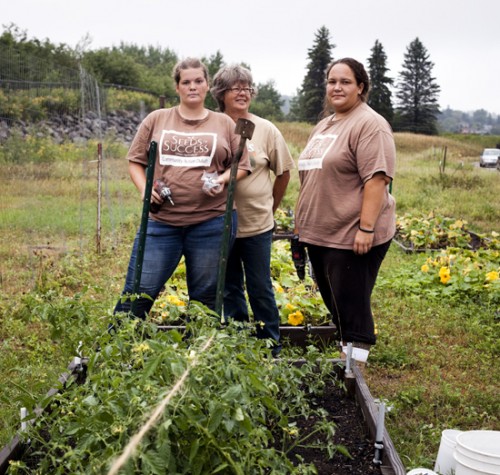 Sara never imagined she’d be working in a garden in Duluth, Minnesota. The garden sits behind the colorful, recently-built Hope VI housing development, Harbor Highlands. It overlooks downtown Duluth and a curve of flat shoreline that arcs southeast against the steel-gray water of Lake Superior. The steep escarpment of the lake’s western shoreline here makes Duluth feel like the edge of the world. The off-on summer rain has left the early morning air heavy and gray.

One can only hope it was sunny and breezy when Sara first arrived here from her hometown of Alexandria, MN, four and a half hours away. It’s easy to imagine her in one of those cartoons where the character runs headlong from danger, glancing over her shoulder, and turning to look ahead just in time to come to a screeching, heels-skidding-in-the-dirt stop at Duluth’s steep edge of land and water.

Sara was that character in 2010. She and her then-nine-year-old son and three-year-old daughter bolted out of a domestic violence situation in Alexandria and headed to Duluth. It seemed a safe distance. Sara knew no one in town and she had no job, since she’d had to leave her employment as a hotel desk clerk when she escaped Alexandria. They stayed in a domestic violence shelter for two months before moving into the Salvation Army’s transitional housing, which offers a two-year stay in conjunction with life-skills training. Sara met her housing advocate each week. They’d set goals and parameters to train Sara how not to fall into the same domestic violence trap in the future. Sara accomplished her goals efficiently, completing the program in ten months, so she could move her family into their own apartment with rent support from Section 8 (Sara pays 30% of her income toward rent and Section 8 covers the rest).

Sara discovered Community Action Duluth (CAD) as a resource to help with transitional employment and she was assigned an “ally,” someone who could act as a mentor, advocate and goal-setter for her. She took classes in “Budget Management,” “Common Sense” and “Getting Ahead.” She started taking classes toward a degree in human services at the community college. Then she heard about the Seeds of Success (SOS) transitional employment opportunity through CAD. It would mean working with the gardens that SOS manages around Duluth.