This spotlight is a feature in a series of the USDA Community Food Project Competitive Grant Program (CFP). Grantees are doing some of the most innovative and collaborative projects to change local and regional food systems. WhyHunger’s Food Security Learning Center — also funded by a CFP grant — has recently begun to profile these organizations through dynamic stories and pictures, to give a real flavor of what the projects look like and how they’re accomplishing their goals. Up today: Mandela Marketplace, Oakland, California. We worked with Mandela Marketplace in 2011 in the first year of the Community Learning Project for Food Justice. Story and picture by David Hanson. 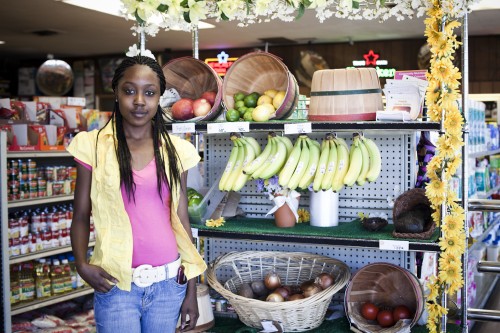 Three corner stores in West Oakland now have produce stands in them. They are small and, as far as inventory numbers, dwarfed by the remainder of the store. But a funny thing happens when you walk into the Bottles store. You’re eye goes straight to the fruit and veggies. They are so out-of-the-ordinary from what our brains have been trained to expect in such a homogenized, artificial food environment. The store suddenly does not feel so sterile and packaged. With vegetables and fruit on decorated stand, Bottles suddenly does not make such an easy metaphor for inner city blight and decay.