In late 2010, Chase Adam was a young Peace Corps Volunteer in Costa Rica. While sitting in the back of a crowded bus traveling through the small town of Watsi, he noticed an old woman in tattered clothes making her way down the aisle. She held a plastic bag in one hand and with her other, was showing a folder to each passenger. After viewing the folder, almost everyone reached into his or her pocket and gave the women whatever they could spare. By the time she got to Chase, her plastic bag was overflowing with money. Curious, he looked up and realized that her folder contained a picture of her son with his abdomen cut open. Next to the picture was a description of his medical condition and an informal plea asking for any donations that could be spared to help fund his procedures. Like the other passengers, Chase felt compelled to help.

Out of his experience, Chase went on to create the crowdfunding website Watsi — named after the Costa Rican town in the story — which is dedicated to obtaining medical funds for needy patients aroundthe world. Coordinating with healthcare partners from across the globe, Watsi receives cases from approved doctors and creates online “platforms” for the patients that include pictures and case descriptions that introduce the causes to potential donors. The procedures are usually small surgeries that cost under $3000, and they remain posted until they are funded. 100% of the donations go to the patient’s medical care, making the site a prime example of how charities and non-profit organizations can use online crowdfunding.

Watsi is just a small part of an emerging multi-billion dollar industry of crowdfunding sites, allowing organizations and individuals to raise funds for a wide variety of projects. As with any financial endeavor, however, it is important to distinguish the differences between crowdfunding sites.

A lot goes into the “the art of the ask,” and while non-profits are often referred to as the “original crowdfunders,” due to being funded by donations, sites with a more entrepreneurial spirit, known as rewards-based sites, have come to dominate the industry.  The best-known example, Kickstarter, a for-profit company based in New York, boasts one of the highest success rates in the industry, with nearly 44% of all approved projects reaching their fundraising goals. It is advertised as strictly for ‘creative causes only’ and requires that all projects have a definite set of goals with a definite end date. All projects must also produce a product – not perform ongoing charity work. The site prescreens all projects and selects only those they deem worthy endeavors. For the rewards-based element, those seeking funding must offer their products or services in exchange for donations in order to entice potential donors’ generosity. Kickstarter also operates on an all or nothing basis, meaning projects have, at most, 60 days to reach their fundraising goal. If the funds fall short, none of the pledged donations are collected. If the goal is met, Kickstarter collects a 5% service fee, with the balance going directly to the project. Kickstarter claims its model encourages productivity by encouraging users to go all out for donations, while not putting pressure on anyone to pursue goals with sub-par funding from donors still expecting to see results.

Kickstarter’s model isn’t for everyone, and other groups have stepped in to offer alternatives. The founders of IndieGogo, a rival rewards-based site operating out of San Francisco, hadmisgivings about Kickstarter’s prescreening process, labeling it a “gatekeeper” mentality. IndieGogo has a very limited pre-screening process to encourage all projects, particularly charities and tuition fundraisers. It is  open to anyone in any country with a valid bank account. In what it advertises as “more choices and less fees,” IndieGoGo also allows for a longer fundraising period and what’s known as flexible funding — allowing fundraisers to keep any money raised, even if the total funds don’t meet their goal. With flexible funding, Indiegogo takes 9% of the total if the goal is not met and 4% if it is. 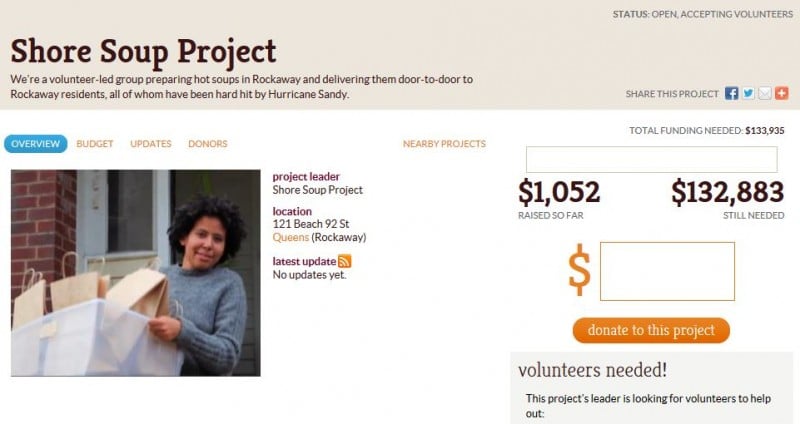 While sites offering rewards make up the majority of crowdfunding proceeds, there are plenty of smaller donation-based sites like Watsi, dedicated to nonprofit endeavors. Ioby, which stands for “In Our Backyard,” only raises a fraction of the money of sites like Kickstarter, but it is fully dedicated to local nonprofits and projects. It filters out all efforts that are not directly serving the public or the environment and has successfully funded over 200 projects — with both money and volunteers. It relies heavily on local communities and claims that 82% of the site’s donors live within 2 miles of the selected project.

For projects that require more specific help — such as looking for corporate sponsorship or application development — Firstgiving offers a solution. Using an extended network, Firstgiving seeks to connect nonprofits with people who can help to improve the quality and efficiency of their work — all for a minimal fee. And for very personal projects, Gofundme specializes in individual causes and uses a unique “Personal Donation campaign” that allows funders instant access to any of the cash pledged.

These are just some of the over 400 crowdfunding sites currently operating — which together raised an estimated 2.7 billion dollars in 2012. Forbes recently estimated that this number will grow to 5.1 billion in 2013, making crowdfunding a viable option for many industries. In the meantime, it seems that aspiring fundraisers should take note that if they can find the right site and connect with their online audience, they too could fill a plastic bag full of money.