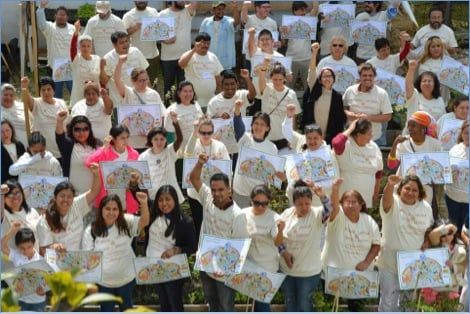 They work hard harvesting citrus, ferns and broccoli to put food on the table, in working conditions that are often inhumane –with limited access to water, no breaks and exposure to harmful pesticides. But without other options, they keep on working to feed their children, and us.

Even as they toil and sacrifice in the fields so others can have fresh food on their tables; the farmworkers are not able to afford a healthy meal for themselves and their families. The pay has not increased in years and the cost of groceries keeps growing. As a solution, families affiliated with the Farmworker Association of Florida (FWAF), a 32-year old organization and one of the largest farmworker organizations in the state, have taken on producing healthy food for themselves by planting gardens in the backyard of their homes and vacant lots.

For many of the farmworkers, it is empowering to produce their own food, using traditional knowledge that they acquire from relatives here in the US and their countries of origin. But to produce food in the current conditions of the degraded and malnourished soils that the farmworkers have access to is hard. So, with the support of Rural Coalition and Via Campesina – North America, the members of FWAF decided to organize the first Campesino a Campesino Agroecology Encounter   help share knowledge and resources to improve production in the gardens and at the same time connect with other peasant organizations in the US and abroad.

But what is agroecology?

Agroecology is not a set of techniques of “sustainable agriculture”. For the peasants in the US and worldwide, agroecology is an agriculture based on the traditional knowledge of those who cultivate the land. This knowledge comes from the connection with the land and all other elements that generate life and is well represented in this poem written by Dina, a peasant woman and FWAF member:

For the moon, the air and the water And as the song says Every morning Mr. Sun comes through my window And at night, sneaks on my balcony a small ray of the moon When the clouds are dressed in gray And with arrogance run towards the fields where farmers wait to plant Blessed are the animals That are sacrificed for our pleasure Of all the good that the land gives us

That knowledge of food producers – peasants and fisherfolk – continues to grow when it interacts with other ways of knowing such as the technical knowledge that is generated through academic science. This process of generating knowledge, based on the experiences of food producers and nature, is Agroecology.

That’s why we insist that Agroecology is not about the technical aspects or methods of food production. Rather it is about how knowledge is produced. Agroecological knowledge should be accessible to everyone to continue existing and it cannot be in control of a minority or exchanged as a commodity. It should be based on social justice.

In response to the impacts of industrial agriculture on water reserves and carbon emissions, the term agroecology is gaining prominence in policy and academic spaces. But it is too often misused. Some policy makers and corporations are working to “re-brand” agroecology as “climate smart agriculture” or a set of sustainable agricultural practices that would replace the destructive techniques spread by the Green Revolution. A new package of farming technologies branded as “climate smart agriculture” will not slow down the extractive practices of resources, improve labor conditions, or most importantly, make our food system more sustainable. Because to accomplish that, we need a more democratic distribution of resources, the protection of the rights of farmers, peasants and fisherfolk to land, water and seeds. We would need to make the rights of Mother Earth and feeding people with healthy foods a priority instead of the needs of the “global market”. As members of Via Campesina International, a global social movement led by peasants, pastoralists and indigenous people, have repeatedly said, there is nothing “smart” about this type of agriculture.

It is within this context, that FWAF, Rural Coalition and Via Campesina – North America organized the Campesino a Campesino Agroecology Encounter – led by farmworkers and for farmworkers – to advance agroecology and build a just food system in the United States. The four-day event took place in two locations where FWAF has a base – Fellsmere and Homestead, Florida – in February 2015 and was entirely based on the local needs of peasant families. For instance, workshops and discussions were created in direct response to FWAF members’ desires to learn more about soil nutrition and management of insects, to hold conversations about feminism and agroecology for women only and to explore worker-led cooperatives.

The last panel of the event was on People’s Agroecology and brought together four peasant organizers from Florida, Puerto Rico and Brazil. The participants shared their perspectives on why we need a People’s Agroecology that is based on social justice for farmworkers, the alliance between food producers and consumers, and economic justice. This inspiring panel showed that agroecology cannot be restricted to food production, because for it to continue growing it requires strong global movements and the active participation of those who already have the connections with the land, ocean and forests.

Thanks to the Via Campesina That is global And carries the message Cares for the seeds The earth and the sun, Water, air and the moon.

Read more about agroecology from FWAF members and other peasants and indigenous peoples from around the world in WhyHunger’s new publication, Agroecology:  Putting Food Sovereignty into Action.