One-quarter of all farmworkers have family incomes below the federal poverty line. Learn about the working conditions of farmworkers in the United States and how to get involved in advocating for justice. 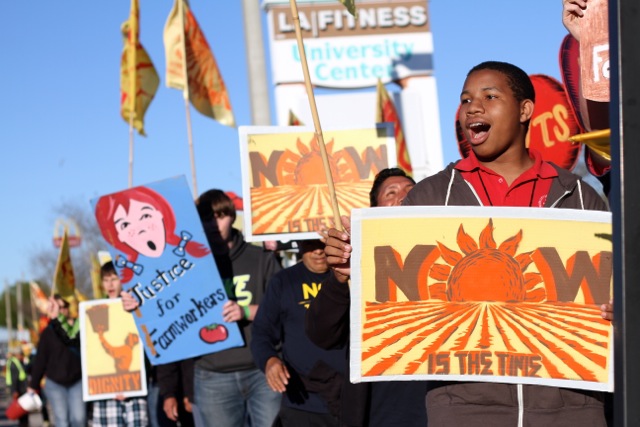 Advocates for the Coalition of Immokalee Workers rally at their Now is the Time tour in March 2014 to urge fast food giant Wendy’s and Florida-based grocery retailer Publix to join the Fair Food Program .

Farmworkers encounter a range of injustices, including wage theft, dangerous working conditions, underpayment and discrimination. At the most extreme of injustices and mistreatment, forced labor on farms still exists in the United States today, often exploiting undocumented workers who do have legal labor rights but may not be aware of them. The agricultural economy that was once sustained by the transatlantic slave trade still uses illegal forced labor, with incidents documented in the vineyards of California and the tomato fields of Florida. According to Florida’s Coalition of Immokalee Workers, undocumented immigrant workers have been found in conditions that meet the definition of slavery under federal law, including being forced to have their arms chained, forced to live in box trucks locked from the outside, and subject to beatings and knife wounds. Since 1997, Florida alone has seen nine prosecutions for forced labor involving farmworkers. The latest case, in 2011, involved 400 guest workers on H2A visas. While it is a minority of workers who have suffered from actual conditions of slavery, the situation for the majority is not much better.

One-quarter of all farmworkers have family incomes below the federal poverty line. A Food Chain Workers Alliance (FCWA) survey found that the median wage for a farmworker is $7.31 per hour. The survey also showed that over 50 percent of farmworkers were paid less than minimum wage and that 48 percent suffer from wage theft, with an average of four hours stolen per week.

Other hazards of farm work include working under inhumane and often dangerous conditions. Despite working outside in the sun on hot days, many farmworkers lack access to shade, water and food. According to FCWA survey data, 64 percent of farmworkers suffered injuries on the field, such as dehydration, skin rashes and heat exhaustion; 54 percent reported coming into contact with chemicals such as pesticides. In some cases, workers were asked to work in dangerous conditions, including at night, in the rain, or in sub-freezing temperatures, or to perform dangerous tasks like jumping over ditches or harvesting right after chemicals had been sprayed.

Farmworkers have also reported suffering discrimination, most often for their immigration status, followed by discrimination on the basis of race, ethnicity, gender, age and language. Verbal abuse and sexual harassment are common, and workers report being retaliated against when organizing to improve working conditions.

Unfortunately, hired child labor also still illegally exists on farms in America. According to the Association of Farmworker Opportunity Programs, 500,000 children in the United States work as hired labor in fields and orchards. Farmworkers surveyed by the FCWA reported minors at work at almost double the rate of other food work sectors: almost one quarter reported working with anywhere from 10 to 20 minors, ranging from ages 12 to 17. Children do the same work as adults of picking and packaging of produce and are exposed to the same chemicals and hazardous working conditions. For more on child labor, see the Food Security Learning CenterWorkers in the Food System article Children in the Fields.

For more information or to get involved in advocating for farmworkers, check out these advocacy organizations: