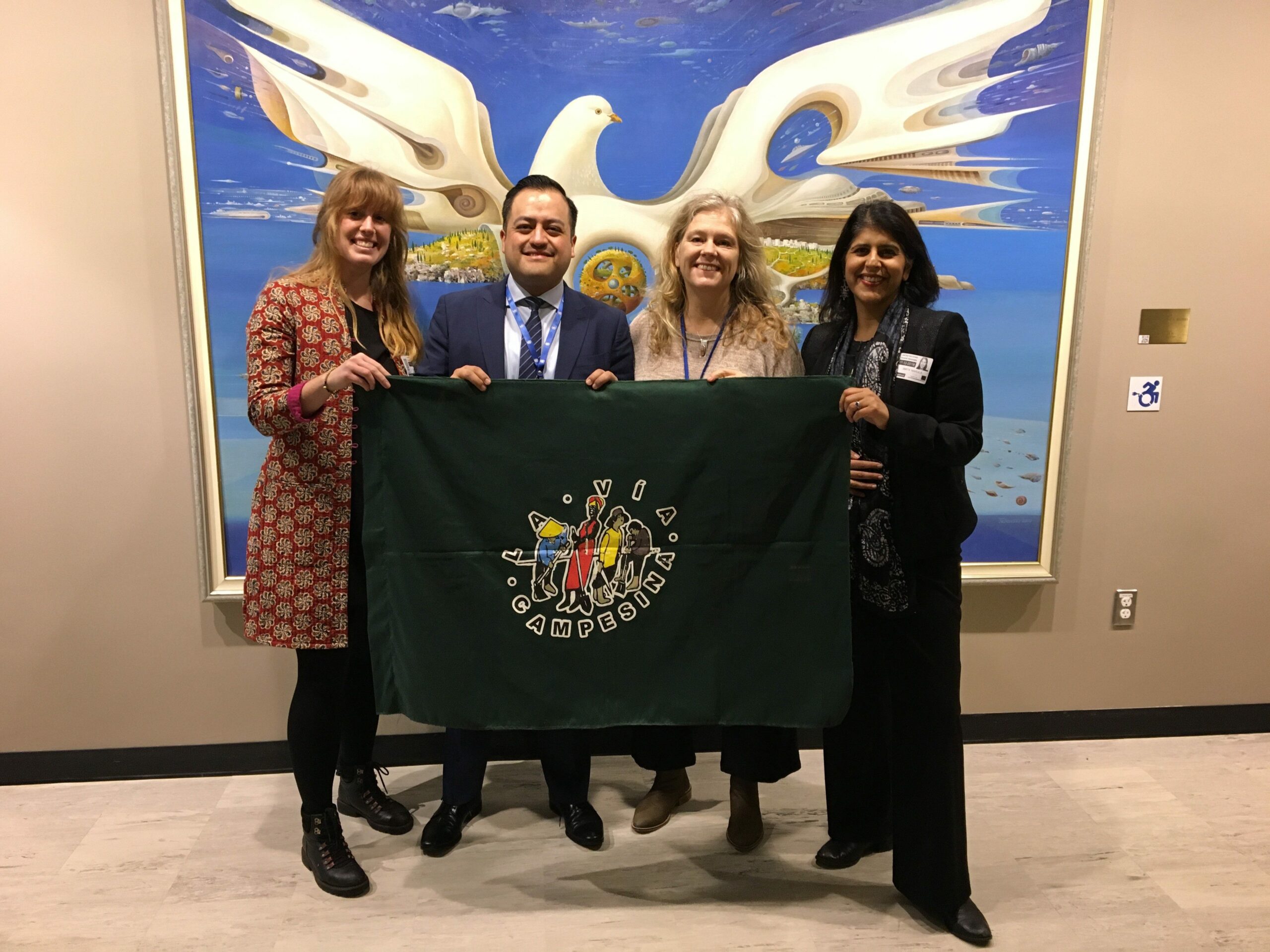 For the past 2 months, #PeasantRightsNow has been the focal point of a delegation from across the globe led by La Via Campesina.  Representing millions of farmers, landless people, rural women and youth, indigenous people, migrants and agricultural workers in 70 countries, this international movement for food sovereignty has fought and lobbied for the adoption of a monumental declaration poised to change the landscape of human rights for the peasant community and other rural peoples around the world.

A moment 17 years in the making, today members of this delegation witnessed the historic moment when the UN Declaration on the Rights of Peasants (UNDROP) was formally adopted by the General Assembly of the United Nations (UNGA).  Representing 193 Member States, the UNGA signaled overwhelming support with 121 votes in favor, 8 votes against and 54 abstentions.

“Not only is [UNDROP] about ensuring peasant’s rights, but it’s also upholding peasant agriculture, which has enormous potential to increase agro-biodiversity, to sequester carbon, promote rural livelihoods and support the empowerment of women who are the majority of small holder farmers but who lack access to land and resources and face other forms of violence and discrimination,” says Haub Distinguished Professor of International Law at Pace Law School and Human Rights Lawyer & Advocate, Smita Narula. “It’s a historic moment where we recognize our humanity is bound up with the rights of peasants and where we get to come together and have a document that addresses some of the most pressing human rights and environmental challenges of our time and gives us a way to move forward.”

WhyHunger has been honored to accompany this important process taking place in New York City over the past few months, providing logistical and technical support to the global delegation led by La Via Campesina and accompanied by CETIM and FIAN International.

Today’s vote from the General Assembly marks a historic moment for the world as we know it.  A step forward for the rights of peasants — who suffer most from violations of the right to food, water, sanitation and adequate housing — means a step forward for the one third of humanity who live, work and build community in rural areas. The peasant community and its allies now have a legal instrument and tool to lobby and advocate for policies to protect small-scale farmers, the majority of whom are women, and ensure the right to food and food sovereignty.

Jessie MacInnis, representing La Via Campesina North America and the National Farmers Union of Canada, was present at today’s vote at the UNGA: “Having an instrument at the international level written by peasants for peasants is powerful and precedent-setting. Moving forward it will be a platform from which we can continue the struggle for food sovereignty. This Declaration sends an important message that our livelihoods matter and our small-scale methods of food production are vital for a sustainable future.”

WhyHunger stands in solidarity with La Via Campesina and its millions of members as they celebrate this victory and begin the hard work of implementing the declaration at regional and national levels to ensure the economic, cultural and social viability of rural peoples around the world.  Globalize the hope! Globalize the struggle!