By Katrina Moore and Saulo Araujo

Every year on April 17, the global peasant movement La Via Campesina calls upon their allies and member organizations to take action for the International Day of Peasants’ Struggles. This year, the organization renamed the event “International Day of Farmers’ Struggles” to draw attention to the challenges of peasant farmers worldwide. The events this Thursday, April 17 will focus on seed sovereignty, or the right of a community or individual to have access to and control over their agricultural seeds. The events are organized in memory of the 19 peasant farmers who were killed while defending their land rights on April 17, 1996 in Eldorado dos Carajás, Brazil. 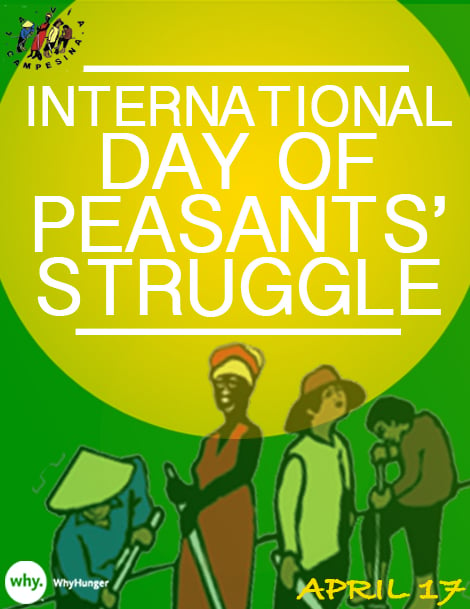 On the evening of April 17, WhyHunger’s Global Movements Program is organizing a public panel in New York City called Food Justice, Food Sovereignty: Building Global Solidarity towards a Just Food System. The free panel features three allies and leaders of the food justice movement, including Chavannes Jean Baptiste, the general coordinator of the Peasant Movement of Papaye (MPP) in Haiti and member of La Via Campesina, who will speak about the importance of food and seed sovereignty to peasant families in Haiti and why the International Day of Farmers’ Struggles matters in their fight for seed, land and water rights. Nancy Romer, an ally of grassroots organizations and social movements, will share her perspective about food sovereignty and food justice in the context of building global solidarity, and Robert Robison, a leading voice on the right to housing in U.S. and global activist and policy networks, will offer final comments.

The panel is from 6:00-8:00pm EDT and will take place at the CUNY Graduate Center in Room 9204. For more information on the event, see the event’s Facebook page. Not in New York? You can watch the discussion can watch via live stream.

Here are more events happening across the nation and worldwide that you can join:

Live Stream: You can watch the discussion Food Justice, Food Sovereignty: Building Global Solidarity towards a Just Food System live from NYC via live stream through this link: //videostreaming.gc.cuny.edu/videos/channel/66/

Chicago: On Friday, April 18, the Family Farm Defenders (FFD) and their allies will rally to protest price fixing in the dairy industry. The FFD’s annual protest at the Chicago Mercantile Exchange demands transparency and equity from the corporation, and occurs in solidarity with the International Day of Farmers’ Struggles. More information on the protest can be found on the FFD press release and on the event’s Facebook page.

Seattle: The Seattle-based Community Alliance for Global Justice (CAGJ) is hosting a seed exchange on Thursday, April 17 in honor of the day. Contributors to the CAGJ book, Our Food, Our Right: Recipes for Food Justice will read excerpts, and recipes from the book will be prepared in cooking demonstrations onsite. More info on the CAGJ event page and Facebook page.

San Francisco Bay Area: Local chapter of the US Friends of MST is organizing a report back form Brazil and a benefit concert to celebrate the International Day of Peasant Resistance. US Friends of MST organized a delegation with 12 people to visit MST families in the state of Goias and participate in the MST’s VI National Congress that was held in Brasilia last February. The report back will be held at La Pena Cultural Center (3105 Shattuck Ave, Berkeley, CA) starting at 7pm followed by concert by local artists (Cradle Duende, Diana Gameros, & The Black Riders Liberation Party).

Madison: On the campus of the University of Wisconsin, the Open Source Seed Initiative (OSSI) is organizing a rally to share seeds and is leading a pledge “to keep that seed freely available to anyone who wants to use it.” OSSI members hope to initiate a movement for free sharing of seed across the country and around the world. As a follow up to the April 17 rally, OSSI plans to hold an Open Source Seed Teach-In at 7:00pm on Tuesday, May 6, on the UW campus. For more details on the Open Source Seed Initiative visit opensourceseedinitiative.org, facebook.com/opensourceseedinitiative or contact Irwin Goldman ([email protected]) or Jack Kloppenburg ([email protected]).

Global: La Via Campesina posted a map of global events related to the International Day of Farmers’ Struggles. Campaigns and rallies are happening on four continents, from Canada to Korea. Check out the La Via Campesina April 17 event map.