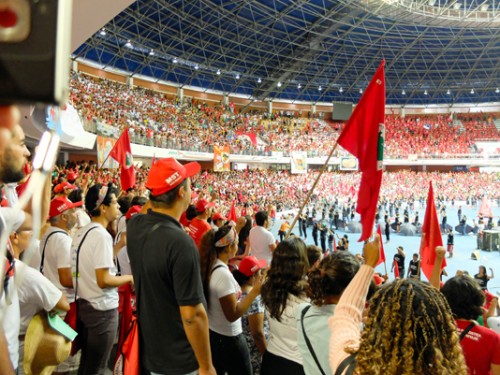 About a month ago, thousands of heartbroken soccer fans left Mineirão Stadium after Brazil lost to Germany 7-1 in the World Cup semifinals. The devastating defeat followed on the heels of protests against the $11.5 billion World Cup hosting expenses, shouldered mainly by the Brazilian government and the Brazilian people, with only $1 billion donated by the International Federation of Association Football (FIFA). In 2013, over a million protesters marched against this spending on World Cup-related infrastructure and demanded more government spending on basic needs like improvements in health, transportation and education. The Landless Workers’ Movement (MST) joined in some of these protests, fighting not only against World Cup expenditures but also the Brazilian government’s $8 billion monthly spending in the stock market. As eyewitness observer Dylan Stillwood noted before the World Cup began, “The word ‘FIFA’ is about as popular as ‘FEMA’ in New Orleans after Katrina.” With the 2016 Olympics taking place in Rio de Janeiro, the debate continues as the city moves forward on construction.

As the world keeps tabs on mega-event spending in Brazil, WhyHunger recognizes the importance of international solidarity and stands with MST’s fight for social justice. The Landless Workers’ Movement (in Portuguese: Movimento dos Trabalhadores Rurais Sem Terra, or MST) was born 30 years ago out of the growing number of landless families due to government land grabs favoring corporate interests. The seizure of land and water resources from rural families is one of the reasons people are hungry in Brazil and worldwide; 20 percent of the world’s hungry are landless food producers such as fisherfolk, farmers and pastoralists. For Brazilian citizens, the raising up of a social movement such as MST was a necessary step to end policies that concentrate these resources into few pockets.  To feed the hungry, the Brazilian government should protect the land rights of peasant families instead of serving the interests of transnational corporations like Monsanto.

The 1988 Constitution of the Federative Republic of Brazil states that land has a “social function” and mandates “rational and adequate use” of the land, a definition that includes environmental preservation and compliance with labor laws. The government, however, does not uphold the law, and instead violently removes peasant families from their land. The constitution allows the state to “expropriate on account of social interest, for purposes of agrarian reform, the rural property which is not performing its social function.” This means, then, that the state reserves the right to transfer unproductive farmland or farms that were involved in money laundering and slavery to landless peasant families. Nevertheless, the government’s policies have been to do the exact opposite. By not enforcing this constitutional rule, the government is supporting international agribusinesses to continue amassing large tracts of farmland and making it harder for rural families to produce food for themselves and surrounding communities. About 45 percent of all land in Brazil is owned by one percent of the population. These large-scale industrial farms are colloquially called latifúndios, a term with negative connotations that comes from colonial land grants that depended on forced labor. MST works to reclaim the land rights of peasant families. 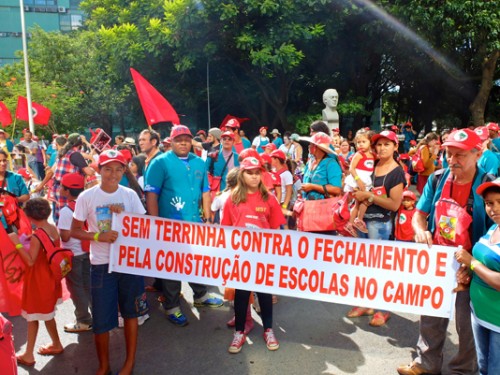 The Children of MST rallying at the 6th National Congress last February. The sign reads: “Sem Terrinha (‘little landless,’ or the Children of MST) against the closure and for the construction of schools in the countryside.” Photo by Alison Cohen.

In the 30 years of its existence, MST has made huge successes in agrarian reform in Brazil. For starters, this peasant-led social movement has been able to reclaim 7.5 million hectares of farmland, benefiting 370,000 families. The main strategy for regaining land rights is occupation of the large tracts of empty land to force the government to take action and enforce the constitutional law. Some families must live in these encampments as long as 7-8 years before their land rights are restored, that is, if they are not evicted and forced to relocate. MST families keep fighting because they envision a new life working on the land and producing healthy foods through agroecology, a whole-systems approach to agriculture that draws on indigenous, local knowledge to create a more equitable, sustainable, and sovereign food system.

WhyHunger stands in solidarity with MST’s whole-systems approach. As the world watches the building of the Olympic Village and the proposed giant artificial waterfall in Rio de Janeiro, the global eye will also be on the fight to use that funding for agrarian reform, improved healthcare, and improved education systems. International solidarity plays a key role in the fight for social justice.

“The root causes of hunger in the U.S. and in Brazil are the same,” says Saulo Araújo, WhyHunger’s Global Movements Program Director. “One of these root causes is the industrial agriculture model, which depends on the concentration of resources into fewer hands. Another is the dispossession of farmers in rural areas from their seeds, water and land. At WhyHunger, we believe in international solidarity and building connections with social movements such as MST so we can learn from each other. For us in the United States, we need to support local organizations that are building international connections and advocating for better agricultural policy because our policies, such as the Farm Bill, do not only affect us. They also have a profound impact on millions of lives worldwide.”