The reason people are going hungry is not because of a shortage of food,
it’s because of poverty.
-Raj Patel in A Place at the Table

During a recession that resulted in lost jobs, homes and livelihoods for millions of Americans, median household income dropped by 8.3 percent. More people are now poor in America than any other time during the 50 years that the Census Bureau has published estimates. In a nation that prides itself as the “land of opportunity,” 46.5 million people are now in poverty, representing more than 1 in 7 Americans. 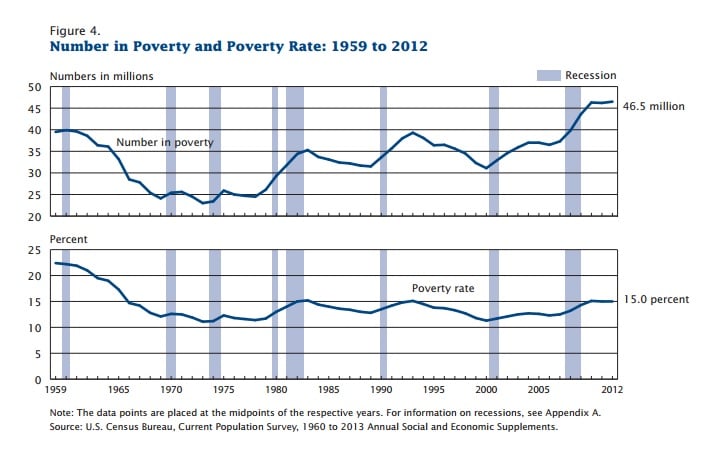 The Erosion of Opportunity

These figures only begin to capture the picture of poverty in America. Poverty, as calculated by the U.S. Census Bureau, is an inherently subjective measure. The measure was first created in the early 1960s and does not reflect any new poverty alleviation policies that have been approved since, making it a narrow and outdated perspective. To address this concern, the most recent census data includes a new measure called the Supplemental Poverty Measure (SPM) that takes a more comprehensive view of individual wealth. The official measure only looks at income and cash benefits, while the SPM takes into account income taxes, work-related expenses like commuting and childcare, and benefit programs like SNAP, school lunch, and subsidized housing. However, the SPM data is found only in a separate report and is not included in the Census Bureau’s press releases, and it doesn’t include quality of life measurements like access to education or healthcare. The SPM also has no weight in determining eligibility for government programs and assistance, which allows these programs to continue to be calculated in the absolute terms of the measure, rather than a more practical – and realistic – approach. While the SPM is a step in the right direction, it does not go far enough. When we take social indicators into account, we get a better idea of how those living in poverty are less able to exercise control over their environment and seize the opportunities to improve their well-being.


Poverty Is Bad For Your Health

As Joel Berg writes in All You Can Eat: How Hungry is America?, this is because processed food rich in sugar, fat and salt (food that is linked to weight gain, hypertension and diabetes) is often cheaper, in dollars and time, than unprocessed healthier alternatives. And the poor may not even be able to access these healthy alternatives, as food deserts in urban and rural communities ensure that the poor cannot maintain a healthy, balanced diet on a limited budget.

The impact of poverty on mortality was recently analyzed in a study published by The American Journal of Public Health. It calculated the number of deaths in the year 2000 attributable to various social conditions, and found that 133,250 deaths out of 2,772,470 deaths that year were attributable to individual poverty. To put that in perspective, that is comparable with the amount of deaths due to lung cancer, which stood at 155,521. The lead author of the study, Dr. Sandro Galea, stated plainly in an interview with the New York Times that poverty results in greater vulnerability to stresses associated with heart disease, a greater likelihood of engaging in unhealthy behavior, poor access to health screening and poor access to quality care. The latter two points are reinforced by the fact that the uninsured rate is highest among people with lower incomes, which stood at 24.9 percent in 2012. 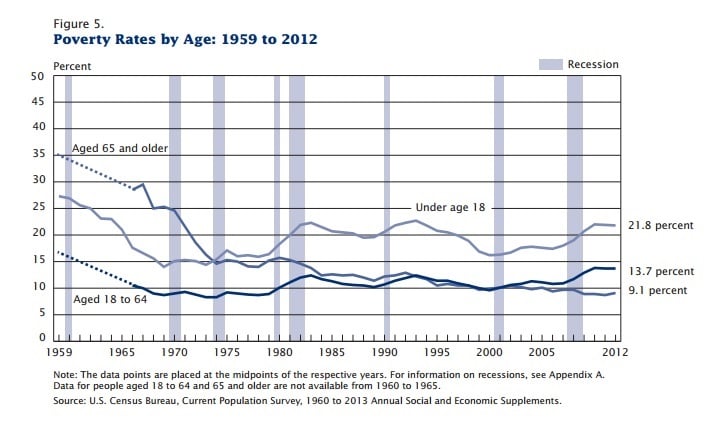 Not only does poverty exert a powerful effect on health, but it also reduces access to education. Due to a lack of resources, from housing and food to child care and health care, the poor are often hard-pressed to acquire what may be one of the most empowering resources of all: an education.

So, when we look at the full nature of poverty and how it prescribes choices and opportunities – which are fundamental inputs to overall well-being – we’re compelled to look at not only what the poor have but also how people in poverty live. Being poor in America results in a loss of opportunities and resources – in other words, a very tangible dilemma of diminished freedom to make choices.

The Growing Chasm Between Rich and Poor

Since 1979, the poor in America (along with the middle class) have taken home less and less of the fruits of economic growth, while the rewards have gone to a select few. Why has this great gulf opened between the rich and the poor? Many factors have contributed, and there is still considerable controversy over what they are and how each has led to the rise in inequality.

One factor that carries more and more weight is the decline of private-sector unionization in America, meaning that the bargaining power of the working classes has declined. In 2001, a study by David Card, a labor economist at U.C. Berkeley, found that decreased unionization rates accounted for up to 20 percent of male wage inequality. He also found that union membership rates for low-wage women declined, but that increased unionization among higher-wage women counteracted that effect.

Another explanation for the expanding gap between rich and poor is the explosion in executive and manager pay (both on and off Wall Street), resulting in a rapid rise in income of a relatively small group. A 2012 study by Bakija, Cole and Heim showed that from 1979 to 2005, 60 percent of the increase in the share of national income that went to the top 0.1 percent of the income distribution went to executives, managers, supervisors, and financial professionals.

While the huge disparities in wealth across income groups have been clearly established, what should not remain hidden is the gap in wealth across race. To recap, wealth is the sum of what you own minus what you owe, and includes your house (or other real estate); cash, stocks and bonds; pension funds; cars; and anything else you have that can be converted into cash. According to a 2011 study published by the Pew Research Center, the median wealth of white households is now 20 times that of black households and 18 times that of Hispanic households. To put that into dollars, in 2009 the typical black household had $5,677 in wealth and the typical Hispanic household had $6,325 in wealth; the typical white household had $113,149.

Why do we focus on this wealth divide? Why can’t we just craft a general poverty-reduction strategy? In short, race matters. The Racial Wealth Divide, a project of United for a Fair Economy, cites the economic barriers that continue to block the advancement of people of color. These include outright and subtle discrimination by individuals, businesses, and government policies, both in the past and in the present, and the costs of segregation, which include lower home values and, consequently, poorer schools. While universal remedies for poverty need to be championed, any approach to reduce poverty must also address the racial wealth divide.

Breaking up the Community

Social cohesion is necessary for societies to prosper economically and for growth to be sustainable. It is the glue that holds societies together, fostering coordination and cooperation for the public good. Yet inequality, according to a2009 study by Heap, Tan, and Zizzo, has a corrosive effect on trusting behaviors. Confirming the considerable evidence from survey data, the study shows that in market settings, inequality reduces trust and leads to a greater general sense of mutual suspicion.

This reduced sense of community has a concrete impact on the lives of the poor and leads to everything from poorer health outcomes to higher levels of crime. As Robert Putnam chronicles in his seminal work Bowling Alone, lower levels of trust effectively hinder collective action; in states where fewer citizens view others as basically honest, tax compliance is lower. This disintegration of trust, then, means a reduced willingness to work together for the public good. If tax money is seen as going to the untrustworthy “other,” then attempts to alleviate poverty or other social ills will be spurned.

In the wake of expanding inequality, the ties that bind communities have been frayed, and the trust that is essential in facilitating collective action, in tackling the perpetual problem of poverty, has been weakened.

The challenges we face in creating a more just society are great, from joblessness and institutionalized inequalities to hunger and structural racism – and the key to progress lies not just in government policies, but in grassroots action. To alleviate poverty in America necessitates not just a top-down response (though government policy is vital), but also an approach that leads to the engagement and empowerment of communities, the revitalization of local economies, and policies that ensure that future growth is sustainable. This means that not only do federal programs such as SNAP (Supplemental Nutrition Assistance Program) and EITC (the Earned Income Tax Credit) need to be expanded and their participation rates raised, but farmers market programs, community economic development initiatives and other community-based approaches need to be emphasized in order to strike poverty at its root.

By focusing on the grassroots as well as on the federal and state levels, diverse peoples can be empowered to work together to create positive changes in their communities. In turn, by strengthening communities and bolstering a general sense of trust, the grassroots approach to reducing poverty can facilitate economic prosperity. As Putnam writes, “…[a] growing body of research suggests that where trust and social networks flourish, individuals, firms, neighborhoods, and even nations prosper.”

Eliminating poverty in America requires broadening our focus and understanding to include not just how much people have but also how they live.

Thanks to Michael Feldman for his contributions to this article.