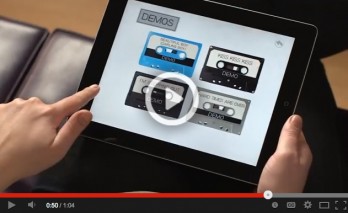 WhyHunger’s groundbreaking interactive album app JOHN LENNON: THE BERMUDA TAPES is now available in the App Store. The app tells the story of John Lennon’s epic journey sailing to Bermuda, his creative discovery and collaborations with Yoko Ono on the iconic album, Double Fantasy: A Heart Play. Preview the experience in this demo video.

John Lennon remains an inspiration to people throughout the world, for his music and his willingness to imagine our world in a different way, ” said Bill Ayres, executive director and co-founder of WhyHunger. “We are thrilled to be a leader in this innovative approach to charitable giving that re-imagines John’s work and allows us to imagine a world free of hunger by investing in sustainable agriculture and securing the right to good food for all.”

That’s what people are calling John Lennon: The Bermuda Tapes. Purchase now in the App Store and check out what else we’re hearing:

The cumulative effect of the app is harrowing: Hearing Lennon’s voice and seeing pictures of him with Sean, it’s hard to believe it’s been 33 years since his death.

I think the album app captures the sense of discovery and the artistic dialogue that John and I shared at that time and provides a new way to help us imagine a world without hunger.

This app is meant to recreate the experience of becoming immersed in a record album. It does so in a way that I never could have imagined. The creativity and thought that went into this is incredible and this app is hugely entertaining not only for the music and stories, but for the way in which you become part of the story.

What a wonderful cause and a magnificent app. This is food for the soul!

Visit lennonbermudatapes.com for more details and purchase now in the App Store.