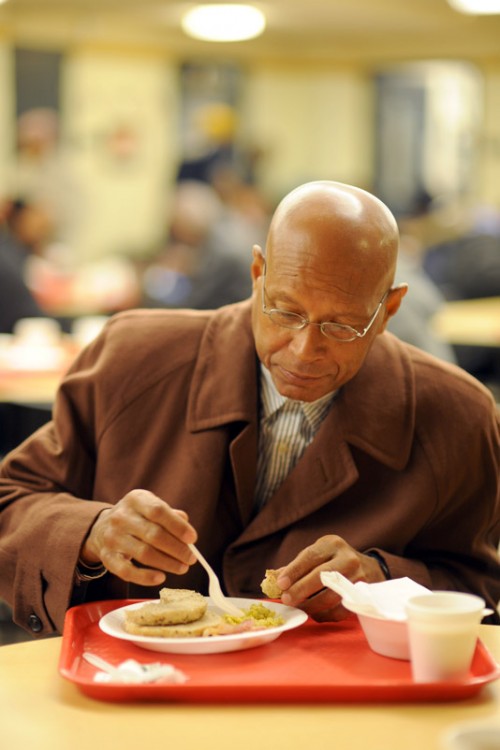 A man enjoys a meal at Yorkville Common Pantry in NYC before going to work. Photo by Diane Bondareff.

In his State of the Union address earlier this year, President Obama called for Congress to raise the federal minimum wage from $7.25 to $10.10 per hour. Despite a recent survey by the Pew Center Research Center showing that three-quarters of Americans support the bill, House Republicans successfully led a filibuster that blocked the bill last month. Here are some articles we’re reading on the minimum wage debate:

1. Changed Life of the Poor: Better Off, but Far Behind

Within the context of the recent Republican filibuster of the proposed bill to raise the national minimum wage to $10.10 per hour, the New York Times reports on the economic accessibility of needs versus luxury goods. While the cost of phones, televisions and toys have plummeted over the past 10 years, the cost of healthcare, childcare and education have skyrocketed. Republicans and Democrats disagree on the government’s role in addressing this gap; meanwhile, individuals working at the minimum wage of $7.25 struggle to make rent.

Fast-food workers on six continents are expected to strike on May 15 to fight for a minimum of $15 per hour. According to this article from USA Today, thousands of U.S. workers are expected to join the protests. Their voices have inspired global participation, and some foreign participants are protesting solely in solidarity with U.S. workers. One worker in Denmark says she makes $21 per hour at McDonald’s and was surprised that U.S. workers have to fight for $15.

3. Why the Inequality Debate Must Consider Race

Three Democratic Senators address the issue of growing income inequality with specific attention to the racial and ethnic wealth gap in the U.S.

CNN Money shares the story of Tiffany Kirk, who works as a bartender for $2.13 an hour to support herself and her three-year-old daughter. She is one of about 3.3 million who live on the federal minimum wage for tipped workers, which has not changed since 1991. Though restaurants are required to pay the difference if the total income including tips does not equal the federal minimum wage, many establishments do not abide by this rule.

5. The Effects of Minimum Wages on SNAP Enrollments and Expenditures

This March 2014 report from the Center for American Progress shows that raising the minimum wage to $10.10 per hour would decrease SNAP spending by $ 4.6 million per year.