You will lose your way.

All your work will be for naught.  All your countless hours of backbreaking toil will

Disappear into the endless sands

The Tohono O’odham Nation sits in the heart of the Sonoran Desert. The “Desert People,” the English translation of Tohono O’odham, have survived by living in this arid region for 10,000 years. Like the Israeli and African farmers of recent generations, the Tohono O’odham people have historically been able to grow nutritious and sustainable food in the harsh desert land using flood-based farming techniques and cultivating crops well-adapted to the climate such as tepary beans, squash and 60-day corn. They are creating miracles in the desert.

In recent years this has not been the case. Beginning in the early 1900s, U.S. government relocation programs, water rights disputes and the introduction of highly processed commodity foods resulted in a gradual loss of farming knowledge and culturally-appropriate foods. The health of the Desert People has also suffered. Prior to 1960 diabetes was a rarity.  Today, 57% of the Tohono O’odham people will develop Type II diabetes – the highest percentage in the world — and die prematurely. 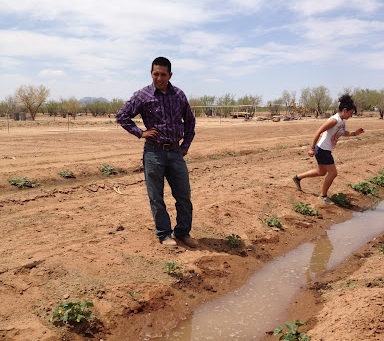 We were privileged recently to walk on the “Desert Peoples” land that, from an outsider’s perspective, might appear to be barren and, indeed, had largely been forsaken by the Tohono O’odham as apathy in the face of enormous externally imposed challenges has persisted through several generations.  That is, until a few brave visionaries 17 years ago recovered the wisdom of their ancestors and shaped it into a holistic approach and community-based organization called Tohono O’odham Community Action (TOCA).  In returning to the wisdom of their ancestors, they have set about to recover their health and livelihoods – their food sovereignty — through the lens of traditional practice and new knowledge.

During a recent visit to TOCA in Sells, Arizona, we saw abundance again in the desert. The people of TOCA are growing several native crops — white and brown tepary beans, various squashes, corn adapted to dryland farming conditions and harvesting the fruits of native wild-growing plants such cholla, prickly pears, and saguaro cacti and the pods of the mesquite tree, and introducing these delicious and nutritious foods into the diets of families in the community and children at school.  Each year they grow more food on more land to feed more people and are slowly improving and ultimately saving their own lives.

Combating the highest rate of diabetes in the world, TOCA is reintroducing traditional food production to the community, stimulating improved community health, revitalizing a heritage of health and fostering economic opportunity through the lens of O’odham Himdag – “wisdom from the past, creating solutions for the future.” This dedicated backbreaking work has resulted in the successful creation of two farms, efforts to market and distribute traditional foods through an on-site café and kitchen, healthy school meals and extensive educational programming particularly geared to young people, TOCA stimulates increased community self-sufficiency and vitality.  It is WhyHunger’s honor to partner with these dedicated visionaries and connect them to other food justice and anti-hunger leaders across the country and around the world.  It is only through an openness to the stories and work of our partners that this global movement for food sovereignty will succeed and feed the world with healthy sustainable food.