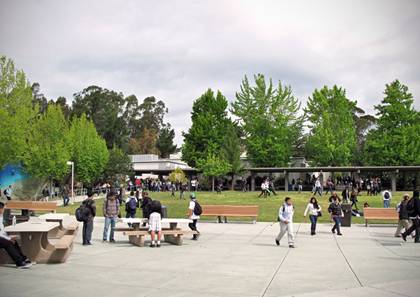 Most people think of English charm and a recent reality TV series set in Los Angeles when referring to a certain charismatic and accomplished chef who is taking on school food reform as an issue of immediate and vital concern to future generations. Of course, they are thinking of Jamie Oliver and his television series, Food Revolution. But the “Real Jamie,” as he is affectionately referred to, works his magic a little farther north up the California coast, in Santa Cruz. He is Jamie Smith, Senior Manager of Food Services for Santa Cruz City Schools, and his enthusiasm is every bit as contagious as his world-famous English counterpart.

We visited Smith at Harbor High School, one of the Santa Cruz public schools where he is generating and piloting innovative ideas to address some of the obstacles to school food reform. The initial impression formed after chatting for a while in his pleasantly chaotic office behind the school cafeteria is also one of the secrets to his success–Jamie is a fun guy. Everything about his easy smile, grown-up surfer style, and rapid-fire storytelling gives the distinct impression that some hilarious adventure is right around the corner. And he brings this vibe to bear on his daily work in the schools–like the time he dressed in a garbage bag and burst into a classroom to empty a barrel of refuse on the floor. After challenging the students (and one very surprised teacher) to identify all the items that should have been recycled and everything that could have been composted, he compelled them to consider how much unnecessary waste was being generated at the school and what they could do about it. This particular madcap teaching tool turned out to be so effective (and fun) that a “dumpster diving” contest was held at the next school barbeque, awarding prizes for the students gleaning the most recyclable items and making a direct connection to environmental consciousness and activism for the entire student body. 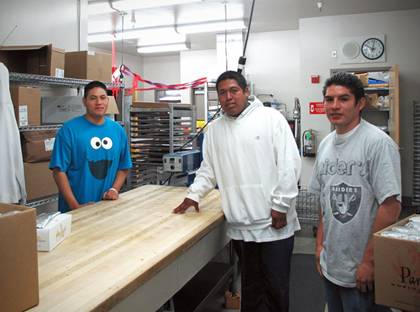 But it’s not all fun and games at school these days– particularly as our national public education system faces the daily challenge of matching plummeting budgets to rising need for a serious nutrition overhaul in the student diets. According to the CDC, childhood obesity rates have more than tripled in the last 30 years resulting in about18% (or 12.5 million) of children ages 6-19 qualifying as obese (obesity is defined as a BMI at or above the 95th percentile for children of the same age and sex) (//www.cdc.gov/obesity/childhood/basics.html). Obesity is referred to as an American epidemic because it’s spreading much more rapidly than expected (//en.wikipedia.org/wiki/Epidemic), with damaging and sometimes deadly consequences, and there are many contributing environmental and lifestyle factors. But there are two things on every list of preventive measures that must be taken: increased physical activity and greater access to healthy, nutritious food choices.

Jamie Smith is tirelessly passionate and very serious about this issue. He sees School Food Service employees as the unlikely heroes of the day– able to determine the eating options that students are provided five days a week during school hours, and therefore able to literally save lives. Smith and his team practice what he calls “stealth health”– finding ways to engage every aspect and every possible connection point in the education system to shift traditional perceptions about what is (and isn’t) possible when it comes to providing nutritious food to all students. Harbor High School has instituted a full credit course using hands-on shifts in the school kitchen as training for students interested in working in and managing a commercial kitchen. There is a student-led café open on campus. Student leaders, including sports teams, are engaged as leaders and helpers at all-school barbeques designed to build community and expose kids to healthy lunch options. Smith introduces himself to students in classrooms and calls people by their name as he passes them in the quad, making sure that there is a friendly face associated with school food. In short, Smith is making it his daily mission, and by extension the driving goal of the Santa Cruz city school food department, to demonstrate that school food is a vital, dynamic, nutritious and cool part of our education system. The Lunch Ladies are finally having their day! 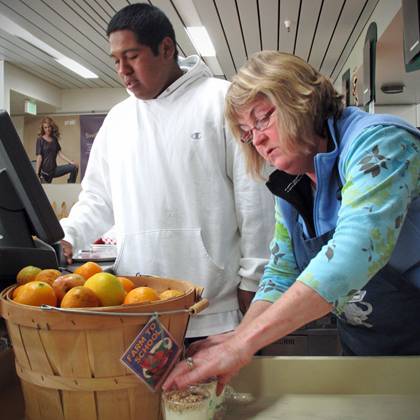 And Jamie Smith isn’t doing this alone. In February 2010, he participated in a diverse community gathering of school food service directors, emergency food providers, university educators, sustainable farming advocates, community economic institutions and concerned community members committed to tackling the growing issue of childhood hunger. A working group to address the challenges facing universal access to fresh, local grown and prepared school food emerged from representatives across a tri-county area of San Benito, Monterey and Santa Cruz counties. The Central Coast School Food Alliance (CCFSA), as it came to be known, is looking to build bridges across school districts to share resources, best practices, and aggregate political power to influence legislators and decision makers at all levels of the procurement, distribution, preparation and financing of the school food system. 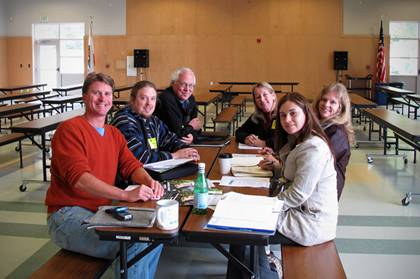 One of the ongoing commitments of the CCSFA is to engage a broad representation of the community in this local and regional effort. Congressman Sam Farr, representing California’s 17th District in which CCSFA operates, has made healthy food access a priority and is actively committed to the group’s priorities and initiatives. Food service directors working throughout the tri-county area schools, including Kimberly Clark, District Administrator in the San Lorenzo Valley Unified School District, are taking a leadership role in identifying creative and effective approaches to transforming the current system emphasizing calories over quality into one that nourishes students and provides nutritional education. Local business owners, emergency food providers, university educators, and community organizers are all bringing their ideas and their passion to the conversation as the alliance identifies priorities and action plans for the coming year.

WhyHunger is partnering with CCSFA to support their development and bring their experience and learnings to a national network of communities working together in the Building Community Power to Eliminate Food Deserts project.  Sister coalitions in the Mississippi Delta and southeastern Arizona will be collaborating over the next year with the Central Coast School Food Alliance team in California to tell a national story of powerful collective community action and the development of fair access to healthy food for everyone in their communities. It’s a tale that is unfolding across many rural and urban communities in America, and it’s about regular people like Jamie Smith empowering strong futures for the next generation. It’s a story about passion, struggle, survival and heroic acts hidden in plain sight…now that’s reality TV worth watching!