An article about Second Harvest’s efforts in nutrition education.

Second Harvest Food Bank of Santa Cruz County located in Watsonville, CA, was founded in 1972 and is the second oldest food bank in the country as well as a co-founder of the national association of food banks that is now called Feeding America. Yet, this medium-sized regional food bank which serves more than 52,000 people each month, no longer refers to its collection of programs and services as food banking. Instead they proudly talk about their core purpose these days as “nutrition banking.” In an emergency feeding system that seems anachronistic and short-sighted in its emphasis on “pounds in and pounds out,” 54% of Second Harvest of Santa Cruz County’s total volume is comprised of farm-fresh fruits and vegetables and half of that is sourced locally. 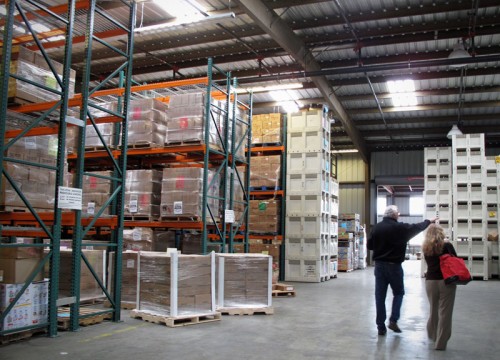 No one can deny that the Central Coast with its Mediterranean climate and rich soils is a grower’s paradise, but proximity to farms producing fresh fruits and vegetables year-round is only part of the equation. As Willy Elliott-McCrea, Second Harvest’s Executive Director since 1988, schooled us: Education and the creative drive to get it done are as important. “First,” he told us, “we brought nutrition education to ourselves – our staff and volunteers. We need everyone who is a part of the food bank to be a part of the choir.” Once the staff and volunteers (many of whom are food bank clients) bought into the link between diet and disease and connected it to their own lifestyles, Second Harvest grew the amount of fresh fruits and vegetables they were distributing by two-thirds in just seven years. They also eliminated soda and energy drinks from their available food items. Touring their warehouse — nearly finished after a decade of construction and fundraising and complete with loading docks, a huge walk-in refrigerator, a composting center and a regional hotline — the evidence of the shift to nutrition banking was indisputable. Crates of strawberries fresh from the field; bushels of raw, whole carrots; boxes of organic baby greens; onions with traces of soil still on the skins were as abundant as the palettes of canned foods and boxes of cereal stacked alongside them.

Willy is an impressive figure at taller than 6 feet. His reputation preceded him. His colleagues gave us an earful right up until the moment we met him – just enough to make us simultaneously thrilled and nervous to meet him: Just wait ‘til you meet Willy; Willy can get any politician in the county to show up and make a commitment; you need to get a new program started — enlist Willy; Willy’s a visionary; you want to know what’s happening in this county, talk to Willy, and on and on. This mover and shaker, however, came in like a lamb and, though he never roared, left us with a sense that the world was going to be okay and that the only way to walk through it with all of its injustice is full-on with a smile, head winds and all. No less impressive is the team that Willy has assembled. They are all community organizers by training and passion, whether they’re coordinating the fleet of trucks and drivers, enlisting parents from the migrant and seasonal laborer community to become nutrition educators, starting a garden, or designing creative fundraising programs such as Grind Out Hunger with Santa Cruz county’s ubiquitous skateboarding community. Some of the staff work cross-departmentally – an intentional organizational design. Brooke Parker, who started as an Americorps volunteers with the food bank, is now the Chief Operations and Programs Officer. She plays a pivotal role in the logistics of food acquisition and distribution at the same time that she is helping to design and oversee the many creative community-based programs that the food bank runs. Brooke is from Watsonville, studied community development and community organizing, and as a result views all of her job responsibilities – from administrative, human resources, and program development – through the lens of community empowerment. “Food banks,” Willy remarked, “are fundamentally community-based organizations. And community organizing is a core value of Second Harvest.” So much so that under Willy’s leadership, Second Harvest of Santa Cruz county changed their mission to emphasize the importance of advocacy and community development: They aim to “end hunger and malnutrition by educating and involving the community.”

Vegetable packages prepared for delivery at the Second Harvest warehouse

Joel Campos, the food bank’s Outreach and Advocacy Manager, is a charismatic member of the community whose parents used to bring him to the food bank when he was little to volunteer and take food home for the family. He talks about how impressed he was by the boxes and boxes of stacked-up food as a little boy. To his child’s eye the warehouse was a huge fort. And, as he says: “I like big things so I came back to work here.” But he doesn’t just like big things, as we quickly learned, he also does big things in the community. It’s not unusual, we learned from his colleagues, that Joel turns out a crowd of 100+ parents during the week at nearby housing projects, schools, churches and even hospitals for an evening of fun learning about the importance of diet and health (that’s right – these parents report that learning with Joel about cholesterol, atherosclerosis, diabetes, and diet is fun), at the same time that he’s organizing and training them to lead their fellow parents in their own community-based nutrition groups. His method is pure popular education. He teaches by not teaching – he creates a space and facilitates a dialogue where the parents learn from each other. The parents know, he says, that the processed and salt-laden food that is consumed in their communities is what is making their children diabetic from an early age, their spouses obese, and their friends suffer from heart disease. They’re living the reality every day. He doesn’t have to tell them. What Second Harvest’s programs do for these parents is bring them together, support them in their own leadership development and provide them with the tools and the farm-fresh food to help each other change their diets. Joel said: “We don’t give out free food.” The parents in the Passion for Produce or the Food for Children programs have to commit to learning from their peer groups by coming to classes and the expectation is made clear that they will take the fruits and vegetables home, prepare a meal and sit down at the table with their families. And, as evidenced by the sheer numbers of parent participants in the food bank’s outreach programs, it’s an action they feel proud to commit to.

Second Harvest is collaborating with the Central Coast School Food Alliance (CCSFA)and WhyHunger to address childhood hunger through the lens of school food reform. Working together with school food service directors, educators, sustainable farms and businesses, and legislators in a tri-county region, the CCSFA is creating a community action plan to ensure universal access to nutritious locally prepared school food. Read more about the team here.