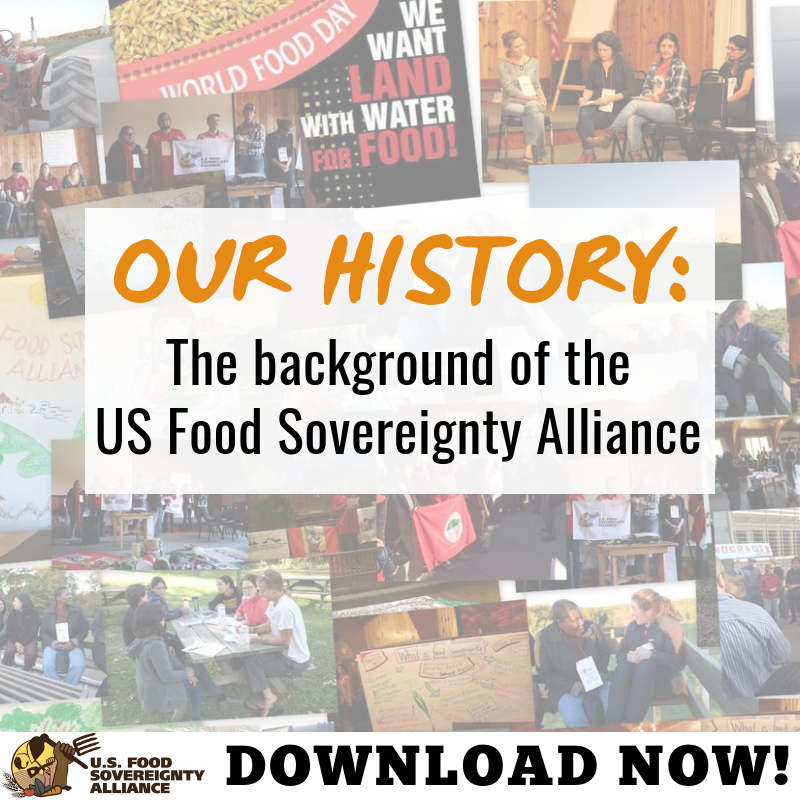 “Our History” serves two main purposes. First, USFSA members can utilize the publication as a tool for developing collective memory and shared strategies. New members will particularly benefit from understanding how the coalition changes over time and intersects with global partners as a regional process of the International Planning Committee for Food Sovereignty. Second, the USFSA seeks to increase membership and construct partnerships across socioeconomic sectors. For potential allies unfamiliar to social movements focused on food and agriculture, the results of this research project can function as an introduction to the struggle for food sovereignty in the U.S.

“Food sovereignty is the right of peoples to healthy and culturally-appropriate food produced through ecologically sound and sustainable methods, and their right to define their own food and agricultural systems.” Declaration of Nyéléni, 2007.

“Our History” begins by defining food sovereignty and highlighting La Via Campesina for presenting the concept at the World Food Summit (1996) as an alternative to neoliberal policies that strengthen industrial agribusiness and weaken the capacity of rural and urban peoples to defend and uphold basic human rights to the sources of life.

The food sovereignty agenda solidified in 2007 with the Declaration of Nyéléni, the culmination of the Forum for Food Sovereignty in Sélingué, Mali. Delegates from U.S.-based organizations initiated the U.S. Working Group on the Food Crisis to further the Forum’s momentum. Responding to the skyrocketing of food prices amid the 2007–2008 financial recession, activists around the world presented food sovereignty as a comprehensive set of transformative solutions to root causes of poverty, hunger, and the destruction of rural livelihoods.

Working groups in the Alliance operate with local rootedness, global connections, and a focus on the cultivation of intersectionality by addressing: immigrant rights and fair trade; resource grabs and land reform; and defense of Mother Earth. Additional teams fulfill tasks related to fundraising, communications, assembly planning, and the Food Sovereignty Prize, an honoring of international and domestic groups that demonstrate application of the food sovereignty principles. Furthermore, USFSA members orchestrate agroecology learning exchanges and establish partnerships with, for example, the Climate Justice Alliance and Closing the Hunger Gap.

The USFSA has held three national assemblies – Oakland, CA (2011); Tampa Bay, FL (2013); and Des Moines, IA (2015) – for members to build relationships and common tactics through a dialogue of different ways of knowing. Anchored by C2C, the IV Membership Assembly in Bellingham, WA (October 12–15, 2018) will be the first national convergence since the regional restructuring that followed the III Assembly in Iowa. The USFSA’s coordination team transitioned to a model of representation based according to geographic regions – the Southeast; the Northeast; the Midwest; and the West Coast / Pacific Northwest – and reaffirmed their goal to continue fostering the leadership of grassroots organizations, women, and minorities.

The USFSA’s Youth Process formed in 2018 with the aim of increasing the participation and representation of young adults associated with grassroots and grassroots-support organizations across all regions of the Alliance. The emerging collective holds monthly conference calls in conjunction with political education grounded in readings and group discussion. Co-organizers of the Youth Process plan to facilitate youth-oriented training space during the IV Membership Assembly in Bellingham and coordinate programmatic initiatives following the national gathering.

For general inquiries or more information about the release of “Our History,” please contact Tyler Short (tylerlaminga (AT) gmail (DOT) com), a member of Sustainable Agriculture of Louisville and the USFSA’s Communications Team.