Reposted with permission. This article was originally featured in the Pesticide Action Network’s GroundTruth blog and is about the dangers of pesticide use to grow our food and what we can do about it. 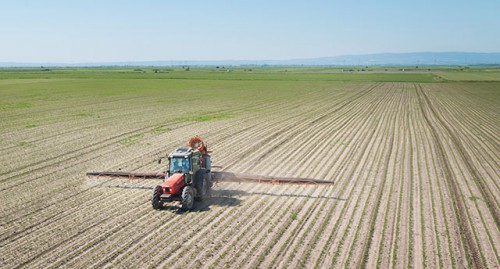 If you’ve been following the recent big news about Monsanto’s infamous weedkiller RoundUp and cancer, you’ll have heard that industry’s “dirty little secret” just got dirtier.

In case you missed it: the international scientific community sent us two very loud wake-up calls last month. First, the UN World Health Organization’s prestigious International Agency for Research on Cancer released a consensus report that glyphosate, the active ingredient in RoundUp, is a “probable carcinogen.” A few days later, a team of international scientists based in New Zealand reported that widely available commercial formulations of RoundUp, 2,4-D and dicamba can lead to the development of antibiotic resistance in common disease-causing bacteria.

In addition to these findings, there’s a growing body of evidence on health impacts associated with exposure to glyphosate or RoundUp, such as endocrine disruption, organ damage and birth defects.

More toxic soup? No thanks!

Who should be concerned? Every single one of us. For one thing, exposure to this probable carcinogen is virtually unavoidable at this point. Since Monsanto introduced its RoundUp-Ready seeds engineered to be resistant to its top-selling herbicide 20 year ago, herbicide use in this country has skyrocketed. More than 500 million additional pounds — most of it RoundUp — have been applied since then. Not surprisingly, the US Geological Survey has found RoundUp in our air, rain, streams and surface water. And it’s showing up in our food, reports Reuters: in honey, soy sauce, flour and breast milk, for starters. The fact that we don’t even know what other foods are contaminated or how much glyphosate we carry in our bodies is simply because we’re not looking for it, explains Consumer Reports.

It’s our food and farming system that’s at stake — not Monsanto’s.

But it’s not just about RoundUp. Many other pesticides commonly used in U.S. agriculture have been linked to cancer, birth defects, hormone disruption, neurological and developmental damage and other harmful health and environmental effects. Atrazine, for example — the 2nd most widely used pesticide in the U.S. — is a possible carcinogen, endocrine disruptor and groundwater contaminant.

And 2,4-D (the ingredient which, along with glyphosate, is in Dow’s Enlist Duo weedkiller) is a reproductive and developmental toxicant, suspected endocrine disruptor and probable carcinogen, with links to non-Hodgkins lymphoma and birth defects of the heart and circulatory and respiratory systems.

I say “every one of us” should be concerned for another reason as well: it’s our food and farming system that’s at stake. It belongs to us — to ordinary rural and urban families, farmworkers and communities across the U.S., not to Monsanto. The ubiquitous presence of hazardous pesticides — in our food and on our farms, in the air we breathe and water we drink, in our children’s bodies — is not something that any of us ever asked for.

In point of fact, pesticide-intensive agriculture is not even working for farmers. RoundUp resistance and the epidemic of “superweeds” infesting over 60 million acres of American farmland is but one indicator of the utter failure of this model to provide food, jobs or livelihoods in an ecologically sustainable, economical or equitable way.

Most importantly, this disaster is definitely not something we have to put up with.

No farmer should have to choose between cancer striking his or her family and making a decent living. But apparently EPA and USDA consider this a reasonable choice. I consider it obscene, and I hold our public agencies responsible for the disastrous predicament that American farming is in.

In reality, this is a false choice. It is possible to grow corn, soybeans, small grains and all manner of fruit and vegetable crops in biologically based, diversified farming systems. Agroecological practices such as ecological weed and insect pest management, combined with smart soil and water conservation practices are being employed by innovative farmers all over the U.S.

The problem we’re facing, however, is not about lack of sustainable solutions. The problem is that Big 6 pesticide companies like Monsanto — supported by USDA and backed by the U.S. government’s export-driven trade agenda — have built up an agricultural economic system that puts multinational corporations’ profits above people’s well-being, and locks farmers into these unsustainable practices.

“Farmers are trapped in an economic system that forces them to keep producing corn and soybean in very destructive ways. It’s all about converting bushels of corn and soybean into pounds of oil, carbs or protein for agrofuels and livestock feed. This system of all-out production at any cost will only change if sensible people demand different policies and create new markets.”

EPA will decide whether or not to re-register glyphosate later this year; the two recent scientific reports on the direct and indirect health harms associated with glyphosate raise the stakes of this decision dramatically. PAN is calling on EPA to fulfill its obligation to protect public health and produce an action plan within the next 45 days, with an expedited timeline to phase out our farmers’ dependence on and exposure to glyphosate. The agency must also, as a matter of highest priority, immediately cancel its recent approvals of Dow’s new 2,4-D and glyphosate-containing product, Enlist Duo, and deny Monsanto’s application for dicamba use in GE cotton and soybean production.

Meanwhile, USDA must stop greenlighting Monsanto and Dow’s products, and instead develop its own action plan — complete with timeline and benchmarks — for how the agency will spearhead a country-wide transition to least-toxic ecological weed management. The new plan must break the cycle of weed resistance that keeps farmers on a pesticide treadmill, and phase out reliance on health-harming herbicides like glyphosate, atrazine and 2,4-D.

Now more than ever, American farmers need support in shifting from today’s toxic, ineffective and unsustainable model of agriculture into one that is productive, ecologically resilient, healthy and safe. Such system-wide changes cannot happen overnight. But getting this urgently needed process started is essential, and requires leadership and a serious commitment at the highest level.

USDA and EPA are putting corporate interests above farmers and public health. Tell them to stop. Act now by signing this petition.

Marcia Ishii-Eiteman is director of PAN’s Grassroots Science Program and a Senior Scientist with a background in insect ecology and pest management. Her campaign work focuses on supporting and strengthening agroecology movements and policies in the U.S. and globally, in addition to challenging corporate control of our food and seed systems. Follow @MarciaIshii