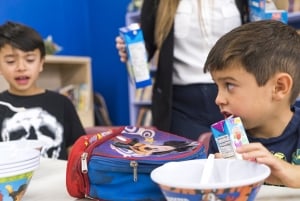 In case you missed the exciting news, New York City recently announced “free lunch for all” in public schools. This is an initiative that WhyHunger has advocated and fought for, for years. Here’s what our Co-founder and Ambassador Bill Ayres had to say:

“In the midst of so much bad news in our country and our world, it is a joy to hear that all of New York’s public school children will receive FREE school meals.  This will help the hungriest children in New York to eat more nutritious food and be better prepared to learn.  For many of us this is the fulfillment of a decades long dream to do this one thing that will dramatically reduce childhood hunger and increase learning.”  Bill Ayres, Co-Founder and Ambassador

New York City public schools open today, and for its 1.1 million students, school lunch will now be free of charge. Carmen Fariña, the city’s schools chancellor, announced the news Wednesday. “This is about equity,” she said in a Hell’s Kitchen elementary school cafeteria, “all communities matter.”

Other major cities including Boston, Chicago, Detroit and Dallas also provide free lunch to all students, yet New York City is home to the largest school district in the United States. Implementing a universal free-lunch policy would aid approximately 200,000 families, saving each one of them an estimated $300 a year, The New York Times reported. Already, 75 percent of New York City public school students qualified for free or reduced-price lunches.

School lunch fees can be a huge burden for cash-strapped families and often the lines between those who qualify for free or subsidized lunches and those who don’t have been arbitrary. Nationwide, school lunches cost approximately $1.75 per day per student. For children from economically disadvantaged families (or families with multiple children in public schools) even this low price barrier can mean having to skip lunch altogether.

Students in these situations often find themselves subjected to lunch shaming from their peers. The shame involved in taking free lunches is so pronounced that families that qualify for assistance may not fill out the paperwork necessary to receive aid. The city’s “Free Lunch for All” program would eliminate such barriers and stigmas.