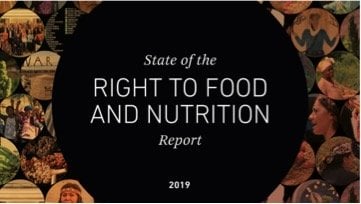 WhyHunger has joined with social movements, frontline organizations and advocates around the world to call for the universal right to nutritious food. Three years ago, WhyHunger became an organizational member of the Global Network on the Right to Food and Nutrition.  We are now serving a 2-year term on the coordinating committee for the global network. Founded in 2013 in response to the chronic world food crisis, the GNRtFN includes around 50 member civil society organizations (CSOs) and social movements from 5 continents – representing peasants, fisherfolk, pastoralists, landless people, consumers, urban people living in poverty, agricultural and food workers, women, youth, and indigenous peoples –  that recognize the need to act jointly for the realization of the right to adequate food and nutrition.

For the first time, the GNRtFN has just released its own report on the State of the Right to Food and Nutrition.  Not just another report drawing conclusions based on statistics, data trends and numbers – this report tells the stories behind the numbers in an effort to change the narrative from one that props up the false solutions to hunger (increasing food commodity output and food aid) to one that reveals the root causes of chronic food insecurity and calls for food sovereignty.

Every year the State of Food Security and Nutrition in the World (SOFI) provides estimates about the numbers of people who suffer from food insecurity and malnutrition in the world.  In 2019 that number is a staggering 820 million people globally who are hungry and malnourished, while 2 billion are food insecure. These numbers are important and every year CSOs critically assess the SOFI report for a lack of human rights or structural analysis (see 2018 and 2019 critiques). However, these assessments are mostly ignored. According to Emily Mattheisen from FIAN International who coordinated and co-authored the report, this lack of attention to human rights is not a coincidence. “Human Rights accountability does not fit with the dominant narrative of causes of food insecurity and the related profit-based corporate solutions,” Emily says.

The Global Network’s State of the Right to Food and Nutrition report amplifies the voices of those on the frontlines and shares experiences from the North and South, where communities and CSOs have successfully organized and advanced various policies to uphold their right to food and nutrition. Included in this report is a spotlight on the efforts of the state legislature in Maine to codify the Right to Food and Food Sovereignty within the Maine constitution – an effort spearheaded by Food for Maine’s Future and reported on in the WhyHunger blog.

While the Report is only a snapshot of how people have advocated for the right to food and nutrition over the past year, by telling more stories and struggles of the people behind the numbers, the GNRtFN strives to fill the gap left by statistics.

After 44 years of working in the U.S. and around the world to end hunger and build social justice for all, WhyHunger knows firsthand that the just, plentiful world we are working to build has no room for oppressive systems and regressive policies, rhetoric or actions. With federal policies and practices that threaten the values of a food system that focuses of nutritious food for all people unfolding at a rapid pace, we need to build power together and stand up for and with our community-based partners and social movements and work together to build a just, hunger-free world.  When we frame nutritious food squarely as a human right, we begin to not only shift the conversation beyond food access and charity, but also uncover solutions that strike at the root causes of hunger and poverty to build social justice.

Like our counterparts in the GNRtFN, WhyHunger is committed to building and strengthening movements to transform our current food, farming and economic systems into those that nourish whole communities and ensure the rights of all people to food, land, water and sustainable livelihoods.

And while the right to nutritious food is not a recognized legal framework that defines a set of guarantees which governs public policy in the United States (as is the case for all of the countries represented in the global network), we can use the right to nutritious food framework as a tool to explore, discuss and debate how accessibility, adequacy, affordability and sustainability play a role in achieving food security, food justice and, ultimately, food sovereignty.