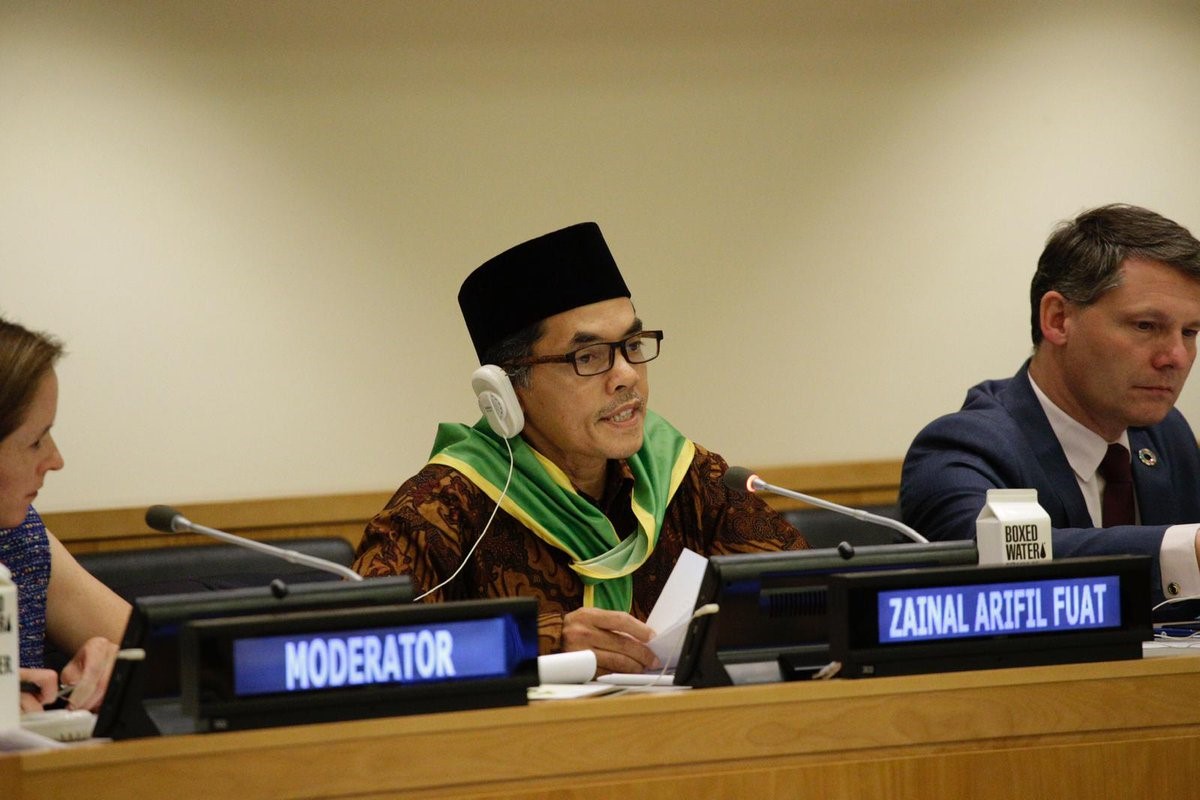 Zainal Afrin Fuat, member of the International Coordination Committee of La via Campesina giving his opening remark at the launch of the United Nations Decade of Family Farming.

Image: Zainal Afrin Fuat, member of the International Coordination Committee of La via Campesina giving his opening remark at the launch of the United Nations Decade of Family Farming.

“Long live Family Farmers!” Zainal Arifin Faut, a member of the International Coordination Committee of La Via Campesina, exclaimed, concluding his speech at a special meeting at the United Nations headquarters in New York City this week.

Tuesday, July 7th marked the launch of the United Nations Decade of Family Farming, (UNDFF) an initiative recognizing the importance of family farmers in reaching the UN’s Sustainable Development Goals of 2030 and ending hunger around the world. Faut was among a panel of leaders assembled to help launch the UNDFF and celebrate the U.N.’s commitment to the sustainability and success of family farms, as the future of agriculture.  Other panelists included: Epsy Campbell Barr, the Vice President of Costa Rica; Jose Graziano da Silva, the out-going Director General of the Food and Agriculture Organization of the United Nations (FAO); and Gilbert F. Houngbo, the president of the International Fund for Agricultural Development (IFAD). The event was moderated by Rebecca Middleton, the Executive Director of the Alliance to End Hunger.

The Decade of Family Farming is a result of the United Nations 2014 International Year of Family Farming that demonstrated the need for further insight, development and dedication to the role of family farmers. In her post-launch comments, La Via Campesina-North America representative and Ontario farmer Ayla Fenton, reminded the panel that: “According to FAO, small-scale food producers are feeding 70% of the world with only 30% of the resources- and yet, 80% of food insecure persons are living in rural areas.” The UN resolution acknowledges the need to protect the rights and livelihoods of those who feed the majority of the globe and grant them equal access to the resources necessary to do so. As part of the UN’s 2030 Agenda for Sustainable Development, Faut commented on how the resolution recognizes the need for innovation in the face of climate change, which is impossible without family farming based on “agroecology and food sovereignty, embracing small-scale food producers including fisher folks, pastoralists, forest people, waged workers and indigenous communities.”

In his formal remarks Faut discussed the need for cooperation and recognition of the many voices represented by La Via Campesina, one of the largest international peasant movements supporting and protecting their dignity and fighting for social justice for those whose voices and ways of life are often oppressed by large industrial agricultural and society, in order to sustainably end hunger without further harming the environment. The United Nations Decade of Family Farming is more relevant than ever, as Jose Graziano da Silva pointed out. It is more imperative than ever, he went on to say, to adapt to climate change as economic and environmental resources continue to decrease. Family farming has proven to be one of the most sustainable routes for adaptation, highlighting the importance of looking at the reality of the world and the need to create partnerships in order to move forward, rather than silencing and excluding those we need the most to survive.

Not only is the current food system – dominated by industrial agriculture and international agribusinesses – contributing to life-altering environmental impacts, but it continues to fail a large percentage of the world’s population, as the numbers of those facing poverty and hunger continue to rise. The State of Food Insecurity and Nutrition (SOFI) report released this week found that about 2 billion people, 26.4% of the world’s population, do not have regular access to safe, nutritious and sufficient food.  Revealing for the first time the full extent to which the current food system abets moderate levels of food insecurity and the obesity epidemic. Fenton pointed out that “we cannot disconnect the increased food insecurity shown in the launch of the SOFI report on July 15, from the dismantling of peasant food systems.”

The new data on food insecurity underscores that we must change the way we produce food and treat the land. The UN’s Decade of Family Farming’s action plan has two overarching strategies and main focuses are to “support youth and ensure the generational sustainability of family farming” and to “promote gender equity in family farming and the leadership of rural women” (UN). One of the most moving moments in the launch event was hearing the stories of family farm owners relating the importance of maintaining their farms to pass along to future generations. That grows increasingly difficult as climate change worsens, market speculation of land and other natural resources continues, unabated, and industrial agricultural dominates the food system. According to the UN, the implementation of the strategies  outlined in the UNDFF resolution would help create policies to ensure the sustainability of family farms. However, as Faut, speaking on behalf of La Via Campesina, pointed out, policies are only as effective as the human rights they protect.

Fenton from La Via Campesina – North America, while reading from a statement prepared in coordination with the food and agriculture NGO group, spoke in support of women and gender equality as an essential pillar to the resolution, as women produce 70% of the food on the planet and continue to be marginalized. She called attention to the reality that such goals too frequently  “do not seem to translate into action points on establishing a broader reality of human rights for women in rural communities”, declaring that the Decade of Family Farming, “must provide a platform in which to take women’s rights more seriously.”

While many remarks from the floor of the launch event expressed support of the goals of the UNDFF, it was also noted that this is just the beginning of the need for further conversations, negotiations and action. Although the resolution lays out a global plan, Faut and several other speakers emphasized that it is important to remember that the plan cannot be accomplished without “policy coherence at all levels including local, national, regional and sub-regional levels. We need to bring home these global policy outcomes including the pillars of the Global Action Plan.” Faut, on behalf of La Via Campesina, insisted that the UNDFF “must also be synchronized with the progressive realization of human rights.  The right to land, right to water, right to seeds, rights of peasant women…when recognized upheld and protected, are the solutions for the current challenges faced in the world’s food system.”

Finally, Faut underscored that it is the family farmers and peasants who must be at the center of determining the policy priorities of the UNDFF, as the action plan is inextricably linked to the UN Declaration on the Rights of Peasants and Other People Working in Rural Areas (UNDROP) recently adopted by the General Assembly last December. “We all know,” Faut declared, “without us [family farmers and peasants], there will be no successful UN Decade of Family Farming to achieve.”