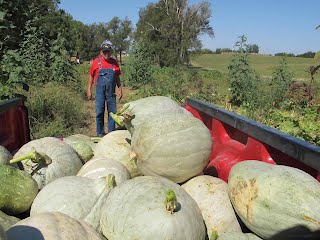 The melons ripened just in time for our annual powwow on the Ioway Reservation near White Cloud, Kansas. The summer’s near-record heat and drought that engulfed much of the region was slightly less intense on our lands near the Missouri River, which allowed us to get a relatively good crop of blue hubbard squash, white corn, red amaranth, and yellow watermelon without a drop of irrigation.

It was only the second season for our “community garden“, which sits below one of our newly installed wind turbines that will provide electricity to our IHS clinic, Senior Mealsite, and Police Station, and grows less than a quarter mile east of the homesite where my mom lived when she was first born. As far as I know, this is the first ever community garden on our reservation—not because we never planted and harvested food together, but because there was never a need to call it a “community garden” when we did. That’s just how things were.

We haven’t always lived along the Missouri River, at least not on the west side of it where our reservation sits today. Before the Platte Purchase in 1836, when we were relocated to our small reservation near the confluence of the Nemaha and Missouri rivers, our territories spanned throughout what is now northern Missouri, east to the Mississippi river (encompassing the majority of Iowa, the state that bares our name), and as far north as what is now Minneapolis, Minnesota.

I didn’t know we lived around the Minneapolis area until I went there in late September for the 2012 Food + Justice = Democracy meeting, hosted by the Institute for Agriculture and Trade Policy (IATP). A few hundred leaders of the Food Movement, both long-standing and newly emerging, gathered there to “elevate the food stories of communities of color and tribal nations” and to continue conversations that aim to “co-create a national food justice platform to push our governments and our political leaders to prioritize a fair, just and healthy food system.”

The final morning of the conference I received an email with a timeline of treaties that led to our relocation to our reservation, straddling what are now the borders of Northeast Kansas and Southeast Nebraska. Knowing we had a connection to the Mississippi river and parts of what is now southern Minnesota, I asked the man who had emailed me what immediate ties we had to Minnesota. He responded “Actually the Ioway held lands around Lake Pepin, up to Red Wing, and in Downtown Minneapolis at St. Anthony Falls (a sacred site) from Oneota times in ‘prehistory’ (about AD 1000-1700), until about 1700.” I had been to the Falls the day before and had already planned to go there again to prepare for the meeting’s closing panel discussion, “The Future of the Food Movement.”

I started my walk towards the river down Nicollet Mall, named for Jean Nicolet, a French explorer sometimes credited with first “encountering” the Ho-Chunk near Green Bay, Wisconsin at Red Banks. (A site on Lake Michigan where the Ioway, Otoe, Missouria, and Ho-Chunk share a common emergence story.) Along the way I passed several recessed “rain gardens” with Native plants as well as a Cancer Survivors Park, a reminder of my own experience using both conventional cancer treatments and traditional foods as complementary healing strategies for a brain tumor. Finally, I made it to the steps that led down to the Mississippi river, a short distance upstream from a waterfall held sacred by my tribe when we lived there just a few hundred years before. I understand the Falls are also sacred to the Mdewakanton Dakota (and likely other Nations) whose homelands encompass what is now Minneapolis.

Every community and place have their own unique food traditions. They also have distinct events that disrupted, altered, or sometimes reinforced them. That’s why any time I’m a visitor somewhere, even if it’s just for a couple of days at a conference, I make time to get outside and learn as much as I can about the place I’m in. I’m not interested in museums, monuments, or tourist attractions that show up on postcards and ‘must see’ lists. Instead, I want to hear about the land—past, present, and future—from the perspective of the Native people who live there. I want to hear about what is underneath the pavement I’m walking on, in terms of the land itself as well as the untold stories of everyone and everything who came before. I want to hear about the traditional foods of the area, how accessible they are today to the local Native communities, and who might be down to trade me some for the big-ass squash in my bag. Knowing how things used to be, what forces led them to change, and applying lessons learned from both provides a foundation for creating (or reinstating) solutions.

The powwow came to a close on Sunday afternoon. We had one small truckload of yellow watermelons to hand out to elders, dancers, and whoever else happened to be close to the truck when the emcee made the “FREE watermelon” announcement. My cousin and I had already made a round with blue hubbard squash earlier that morning, offering some to the Southern Ioway who came up from Oklahoma, and one each to the Head Lady and Head Man dancer. Both of them are in their early 20’s, and have helped in the garden before.

I then headed home, all bummed that the weekend had come to an end. But when I pulled up to my house I saw the Southern Ioway’s charter bus in a parking area next to the Missouri River just across the road. Next thing I knew my truck was full of Ioways heading up to the “Four State Lookout” on a bluff above White Cloud. More exciting to me than seeing “four states” was looking across the Missouri valley to the bluffs in the east where the river flowed before it was channelized in the 1950’s to accommodate barge traffic.

As we stood there, the elder we had given a squash to offered some words and a prayer in acknowledgment and appreciation of our old people and the many stories we share of this place. It felt good to stand with my relatives in the same place and in the same way that many of those before us had likely done. Being up there with them reminded me of a quote from Toni Morrison I came across a few days earlier,

“You know, they straightened out the Mississippi River in places, to make room for house and livable acreage. Occasionally the river floods these places. “Floods” is the word they use, but in fact it is not flooding; it is remembering. Remembering where it used to be. All water has a perfect memory and is forever trying to get back to where it was.” –Toni Morrison

We came down the hill so they could begin their drive back to Oklahoma, just barely outrunning the neighborhood dogs as they nipped at any arm or leg they saw dangling from the truck. I imagine our southern relatives will make their way up here again next fall as they have done each of the last several years. Maybe they’ll bring some squash grown from the seed we agreed to plant together next spring on Southern Ioway lands.