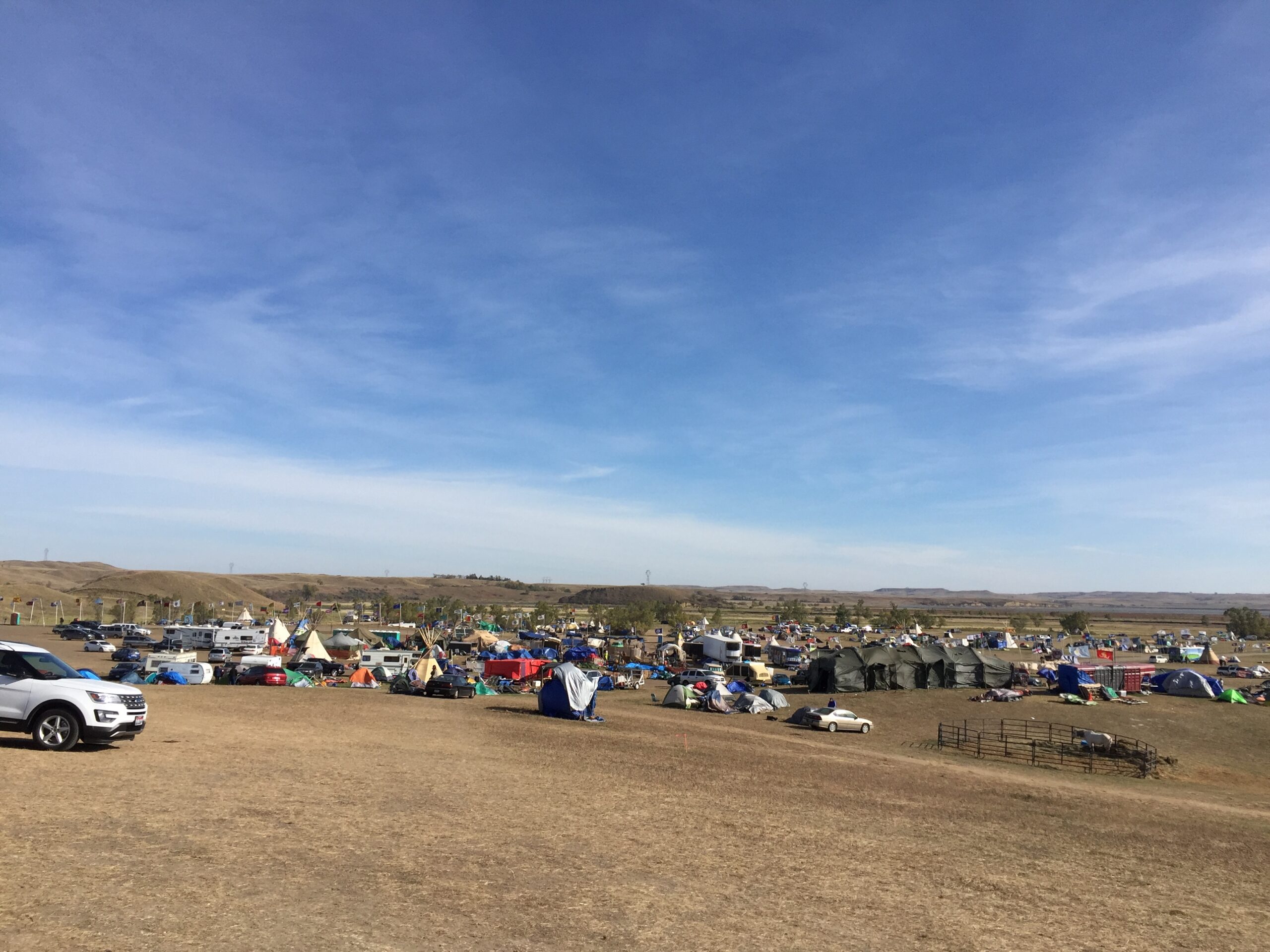 *The above photo was taken by Charlotte Dillon.

WhyHunger stands in solidarity with the water protectors at Standing Rock Reservation in North Dakota. The fight for clean water and environmental justice is inextricably linked to the struggles to end hunger and poverty worldwide.

After the town of Bismark, ND rejected the Dakota Access Pipeline in their region due to concerns over water contamination and environmental impact in 2014, regulators decided without consent or approval from tribal members that the course of the new pipeline would cross Sioux treaty lands, bringing with it those same concerns for the water and land. The new route of the pipeline would pass half a mile North of Standing Rock reservation and cross the Missouri River. For months, thousands of people have been occupying the proposed construction site at Standing Rock, where they are not only physically resisting the pipeline with their bodies but also building a movement based on a 500 year tradition of indigenous resistance, ushering in solidarity across the struggles for climate justice and indigenous rights.

Following militarized attacks on water protectors in October 2016, the United Nations called for an end to the construction of the Dakota Access Pipeline, validating the Sioux struggle at Standing Rock. In response to silence from President Obama, activists announced plans for a national day of action on November 15th 2016 to demand that the United States government remove the permits for construction and investigate human rights abuses at the camps. In a move many see as a response to the on-going activism, the U.S. Army Corps of Engineers issued a statement to pause construction pending “additional discussion and analysis” on November 14th.

Water protectors responded to this with an even stronger message: they will not wait for an answer, construction of the Dakota Access Pipeline must cease and the Department of Justice must investigate human rights abuses against water protectors at Standing Rock. As part of the national day of action, I attended a solidarity action in New York City, where the WhyHunger office is based. The carefully planned event combined principles of non-violent direct action with song, dance and prayer. Chants like “Water is life!” “People over oil!” and “We stand with Standing Rock!” echoed through Foley Square, bouncing off the towering government buildings around us. I was reminded that in dark and uncertain times, unifying in a common struggle is evermore necessary to continue moving forward on the issues that matter: food, water, land, and justice. While President Obama has not directly met water protectors’ demands on the pipeline, President-Elect Trump is predicted to have an even harsher stance. Facing the cold North Dakota winter, water protectors are standing their ground and those in solidarity around the country are strengthening their efforts. The fight at Standing Rock is a critical moment not just for the local community but for social movements working for environmental and social justice around the world. Here are some ways we can all support the fight for clean water and climate justice at Standing Rock:

1.Find out if your bank is funding the pipeline. Move your money or write to your bank.
2.Follow and support our partners on the ground like Indigenous Environmental Network.
3.Find an action or organization near you and get involved.
4.Send monetary donations or supplies to Sacred Stone Camp and Red Warrior Camp at Standing Rock.
5.Visit Standing Rock! Support is needed in the camps so that water protectors can continue defending their land.
6.Keep learning, sharing and engaging on social media with the hashtags: #WaterIsLife #NoDAPL

Food justice cannot be realized without access to clean water and land. WhyHunger supports the water protectors at Standing Rock and the fight for environmental, social, and economic justice.