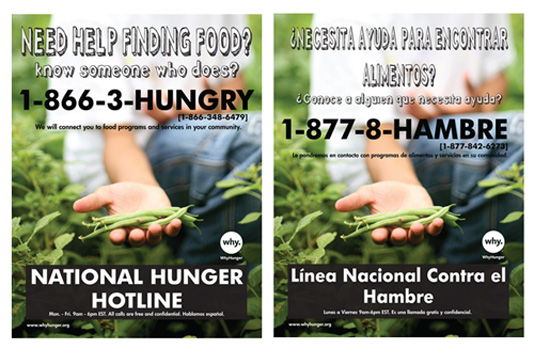 Yasmeen from Detroit, Michigan, called the National Hunger Hotline because she was worried about her family. Her husband had lost his job a year ago and his unemployment was quickly running out. Yasmeen worked part time at a store, but she never got enough hours to make the money she needed to take care of her family. Because of the limited income, Yasmeen and her husband were having problems feeding the family. Some days they only had enough food for one meal, and every day she had to decide whether to feed her children breakfast or dinner.

To make the situation worse, Yasmeen and her husband were having health problems, and even the cheapest insurance was difficult to obtain with the little money coming in. Without insurance, they had to pay full price for prescriptions. The couple was faced with the decision of having to pay for the medicine or feed the family.

The National Hunger Hotline advocate gave her several numbers to apply for  government food assistance, including SNAP (formerly food stamps) and TEFAP, as well as the number for Medicaid and SCHIP, two forms of government insurance plans that may help her afford her medicine without forgoing food for her family. Finally, the advocate connected her with two food pantries in her hometown where she was able to pick up some food that day.