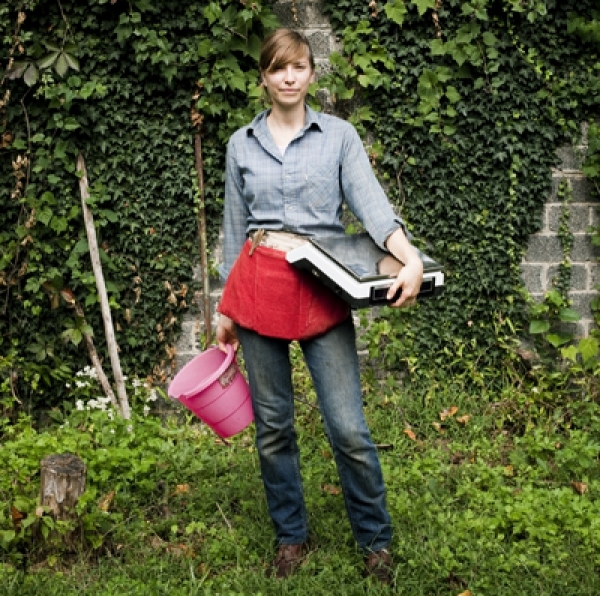 Amanda Staples and Matt McFarland seem to have a secret garden. Except that, unlike in the famous story, their garden has only three tall, vine-covered walls surrounding it. The fourth side opens to the street, and Amanda sells her produce there each Wednesday in addition to providing for a ten-family CSA.

The lot had been abandoned and overgrown for thirty years until Staples and McFarland, following a dream they’d had of owning and operating a small farm in the city, bought the lot and the house behind the lot’s back wall. For a year they cleared the land and prepared the soil for planting.

The Pennsylvania Horticultural Society (PHS) has been seeking out and supporting city growers like Staples and McFarland since it launched the Philadelphia Green initiative in 1974 with a mission to support grassroots efforts at tree planting and gardening throughout the city. So it’s not surprising that PHS found Staples’ project, now called Germantown Kitchen Garden, just when Staples needed help most, in the form of seedlings, seed, tomato framing, row cover, pest controls, salt hay, and massive loads of compost. Staples hopes to make it a viable business, something she can do full-time while her husband continues work as a software designer. She’s weaning herself off PHS’ support, buying her own seedlings and other materials as the garden progresses.

This is not the first kinda-secret-garden to pop up in Philly. The city has a long history of community gardens and “guerrilla” gardens. The Vacant Lot Cultivation Association was founded in 1897, to help people access land and start market gardens. Food rationing during World War I and World War II spurred many Philadelphians, as it did with Americans throughout the country, to plant gardens for food. And the exodus of black farmers from the sharecropper south in the early to mid-nineteenth century brought a new agrarian population to the city. 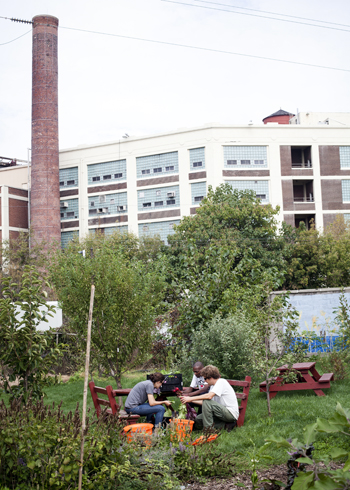 In the 1970s, the community vacant-lot gardens took off, just as the industrial boom imploded, leaving over one-hundred thousand people jobless.

At the same time, another wave of southern blacks moved north. They were joined by Puerto Ricans, who had begun arriving in small numbers during and after World War II and were now coming by the thousands, pushed by the transition of their island’s economy from agriculture to export-oriented industry, and by Southeast Asians escaping the aftermath of the Vietnam War. Many of these newcomers came from rural environments where they grew food or worked on farms. They brought an agricultural knowledge and ethic with them, though largely in the hands of the older generations.

PHS’ Ernesta Ballard launched the Philadelphia Green initiative in 1974, and the Penn State Extension began its Urban Gardening Program in 1977, a success that was eventually folded into a long-running U.S. Department of Agriculture (USDA) program. By the 1990s over two thousand projects covered the urban farm spectrum from gardens raising ornamental flowers to food-producing small farms similar to Germantown Kitchen Garden.

The success of PHS in creating a web of small growers throughout the city has necessitated gradual expansion of their services. In 2004, community growers began asking PHS if they could bump up the capacity to share their fresh produce beyond the reach of individual growers’ family and friends. PHS received a grant from the Albert Greenfield Foundation to begin a program that connects growers with food cupboards like SHARE. They also began a program at the city jail to teach basic gardening, nutrition, and job skills in a rehabilitated greenhouse on the prison grounds. The seedlings from the city jail program were used in educational garden programs and for fruit orchard plantings.

In 2009, PHS received the USDA’s Community Food Project (CFP) grant to expand on these five-year-old efforts. The city jail program expanded to incorporate a work-release project to place released inmates into landscaping jobs. The grant allowed them to create greenhouses, more raised beds, and community workshops at the SHARE food pantry distribution site. They can now supply a network of over 100 growers with 200,000 vegetable seedlings.

SHARE and PHS were able hire a farm manager at SHARE to operate the produce garden and seed nursery at the distribution warehouse. Truck drivers, often volunteers from the various churches and food pantries, see the gardens while they wait for their trucks to be filled. Bill, the farm manager, tells them about growing healthy produce in the city. This year, ten of the churches connected to SHARE have asked Bill to help them establish a church garden on their site. Grassworks simplicity and patience at work. 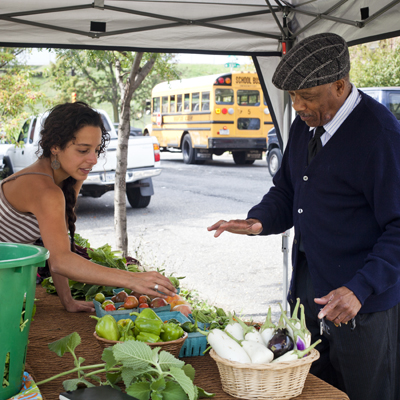 Ray Boston, aka Razor, walks over in gray dress slacks, white shirt and tie, and blue cardigan sweater. He smiles as he asks the young women working the stand if there are any insects in the $1 pint of okra.

He’s lived in this neighborhood since 1985. He remembers another garden two blocks over run by some older guys.

“Mr. Wilbur and Mr. Gray were old fellows,” he says. “That lot was an old church and had been vacant. So these guys were retired, sitting around not doing much. They were from down South. So they started growing on the lot. Had a rooster. They’d give you vegetables, kinda like this farm. Then one died and then the other died. New houses went up but they didn’t wipe out the garden like we thought they might. So God is good.”