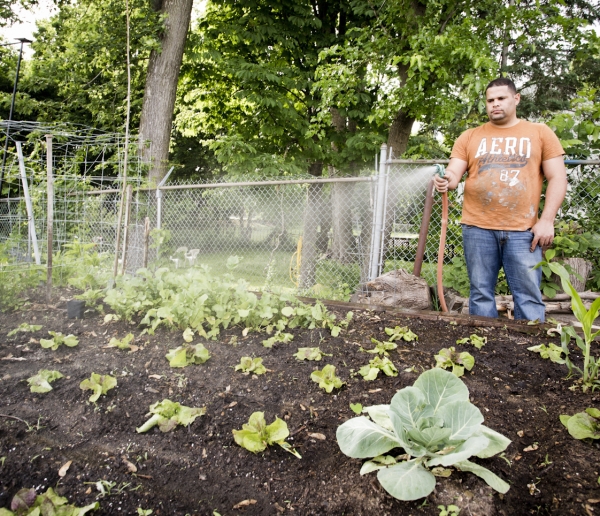 Manney Sicard, age 37, kept seeing people working in the garden behind his apartment. The lot had been another three-story apartment building like the one he lives in, but it had burned, and the vacant lot had quickly attracted weeds, then shadows, then illegal trash. It was not something worth looking at from Manney’s window.

But now there are 32 plots of fresh soil growing lettuces, cucumbers, corn, tomatoes, cauliflower, radish, flowers. There’s a fence around the garden and a lock on the gate. He wanted in.

So Manney started asking the people working there – some of them were his neighbors, others were school groups, elderly groups, disabled adults – how he could get a plot. Finally, he talked to the right person, Maria Natera.

Manney and Maria did not know each other, but both had moved to the United States from the Dominican Republic. They both have the charismatic, playful, laughing personalities so common from Caribbean islanders.

“I told him to get in line, apply like everyone else,” Maria says, laughing at Manney’s attempts to charm her. “He listened to me, applied and it took a little while but he got a plot.”

Manney moved up here in 1999. His wife desperately wanted to leave the Dominican and find the American Dream up north. They had family in Lawrence so they skipped the heavily Dominican neighborhoods of New York, a few hours south, and migrated to Lawrence, a half hour north of Boston.

Lawrence is an old textile mill town, built in the 1840s as the country’s first planned industrial city. Its massive brick and square-paned glass buildings still stand, many of them near the canals of the Merrimack River that helped power the early industry. It’s always attracted immigrants looking for solid work in the guts of American capitalism. First the Irish came, then French-Canadians, Englishmen, and Germans in the 1800s. By the 1900s a wave of Lithuanians, Poles, Syrians, and Italians arrived.

By the later 20th Century the textile mill work had largely been shipped overseas and the factories sat empty. But the city’s solid working class roots and easy access to Interstates and major shipping hubs, enticed a new wave of textile manufactures like New Balance, KGR Inc., and Malden Mills.

When Manney arrived, he got a job on the line at the Gillette factory. He’s a musician at heart, but Manney wanted the steady paycheck and family stability of a factory job. He worked it for years until Proctor & Gamble, like so many companies before it, decided to shut down the plant and move operations overseas, in this case, ironically, to Mexico. Proctor & Gamble wanted to take advantage of the low-wage opportunities in that Latin American country, the same limited pay that Manney had fled in the Dominican.

When Maria arrived from the Dominican, she stayed with her mother in New York in a strongly Dominican neighborhood. She worked in the family restaurant and in a supermarket. Eventually, she moved to Lawrence where she heard there was cheaper rent and still a strong Dominican population. She got a job at Walgreens as a photo technician then worked in a day care for six years while taking night classes for her associate degree in psychology and social work at Northern Essex Community College. 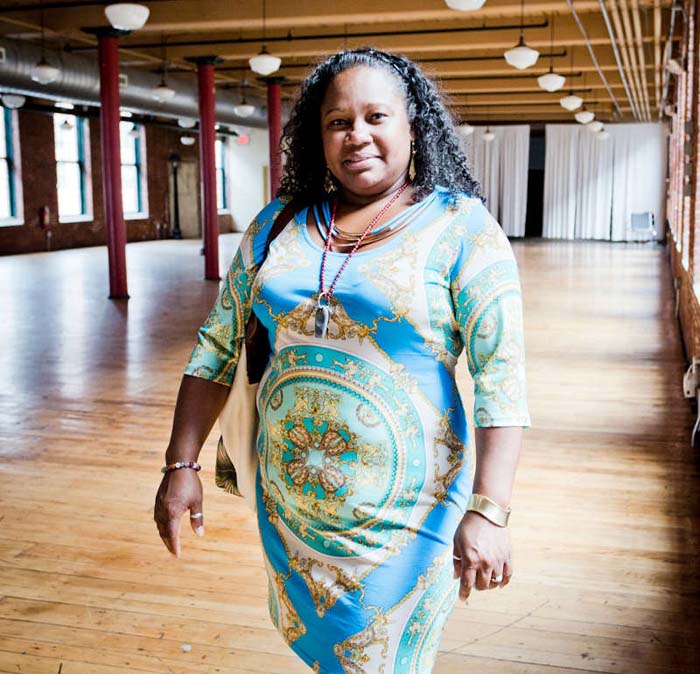 After completing her degrees she took a position as an AmeriCorps volunteer where she eventually began working with Groundwork Lawrence. That was three years ago. Now Maria is nearing the end of her first year of full-time employment at Groundwork Lawrence. She runs the program’s community gardens, the new CSA, and the weekly farmer’s market. She meets people like Manney and helps them find places to grow food.

Groundwork Lawrence has been working in the Lawrence community since 2001. They work from the ground up, beginning with rehabilitating abandoned lots, many of them owned by the cities, and brownfields into productive, attractive civic areas, whether as park space or for growing food. In 2006 the volunteer group that had been running the community’s farmer’s market asked Groundwork to take it over. At the same time, Groundwork began converting a 2.5 acre Scarito Park from brownfield status to a community garden. They were looking at ways to increase residents’ access to healthy food and to growing their own healthy food.

Executive Director Heather McMann applied for and received the USDA’s Community Food Project (CFP) grant in 2006. The city had been tepid toward the idea of the including EBT possibilities at the farmer’s market, which Groundwork had come to manage. So the CFP allowed for Groundwork to assess the community and listen to their needs, challenges, and assets on a community food security level.

The results were enlightening. In a town of 76,000 people, there were two grocery stores. Most of the residents procured food from the 100 bodegas or corner stores. With the rich population of Dominicans and Puerto Ricans, the corner store was more of a cultural staple and the food served in them – rice, beans, tostones, chicken, pork – is not necessarily a bad thing. But in such an industrial community, there was little space for growing fresh vegetables and little access to that produce in stores.

The CFP planning grant allowed Groundwork to talk with all the bodega owners, to create a GIS map of the bodegas and their offerings. The research and assessment illuminated more barriers than a mere dearth of healthy food in the community. They discovered that transportation was a major barrier for many people to access the farmers market. Could they get vouchers for cab transportation for market customers? Conventional pay-up-front CSA model payment plans proved to be an issue. Groundwork realized the payment options available were tailored more to support the farmers than the consumers. In a community of largely low-income consumers, Groundwork needed to turn its attention to their needs. 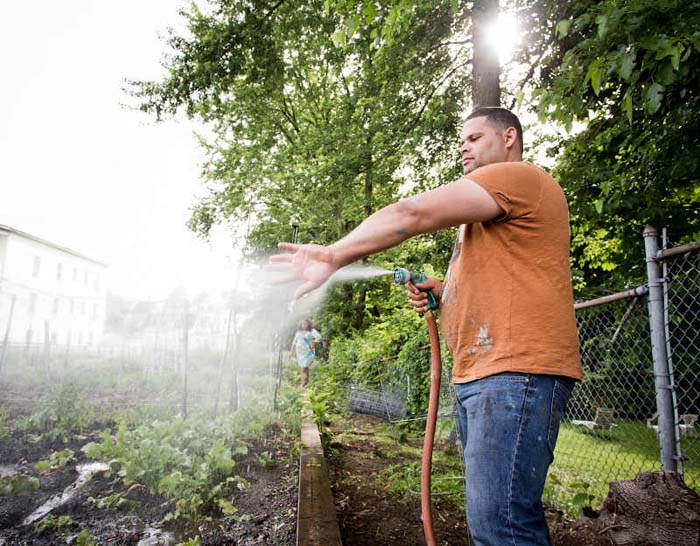 Now Maria operates an EBT/SNAP card machine at the farmers market. Customers can pay each week for CSA shares, which are picked up in Groundwork’s offices in a former mill along the canal of downtown’s Island Street. A CDC REACH grant and support from the Mayors Health Task Force and Merrimac Valley YMCA have helped Groundwork launch a Healthy on the Block program to get better food into the bodegas. But recent cuts to WIC and SNAP couldn’t have come at a worse time. WIC cut 20% of its funding in 2013.

Heather is worried, especially since they recently failed to receive the much-needed CFP implementation grant, about the second farmers market for this year. But she’ll launch it anyway, with some support coming in from area hospitals. She has faith in the energy of the community. The Dominicans and Puerto Ricans, and the most recent wave of Vietnamese and Cambodians, enjoy growing food for themselves and they know how to do it. Guerilla gardens cover the ground between two-story, century-old homes throughout the community. It’s just a matter of finding space and navigating the federal and state support systems that have the potential to increase a low-income, working-class population’s access to fresh food.

Manney says his wife doesn’t necessarily have the same lofty notions of the American Dream now that she’s been here and worked in the factory jobs. But he still believes. He’d move back to the Dominican if he had money, but he needs to be here to make it. So he plays with his salsa-merengue band in the evenings and on weekends – weddings, clubs, private parties. They make good money. He looks for a morning job to fill the space. And he watches his salad grow from his kitchen window.