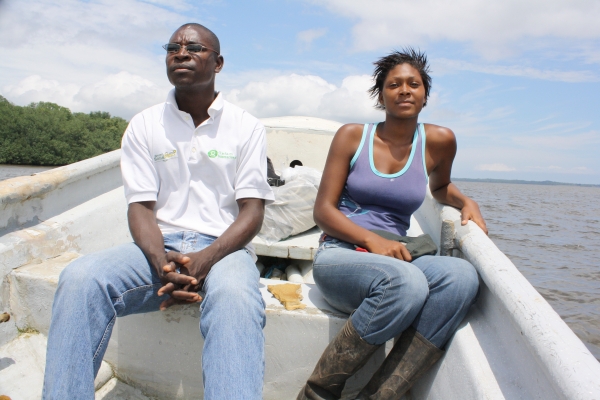 Walking through his parent’s plantation, Máximo explains that the land investors and the current government are connected. They both hold power over the people and the land, while their eyes are on the wealth of export commodity markets. “The land investors are the ones that are connected to the current government in power. The sugar cane that we used as food for the cows are now used as fuel. The corn that we used as food for the hens and to make tortillas is now used as a fuel. Now, our food is used as fuel. The land that used to be farms is now African palm plantations and all the palm oil is for fuel. Places that were farms are now balsa, eucalyptus, teak plantations. All of those monoculture plantations are for export.”

In the corner there are three sacks of seeds with MONSANTO on them. Máximo keeps the seeds as a reminder of the constant struggles, and refuses to use them. Rather than waiting for the Mafia to return, Máximo went to Quito and worked for C-CONDEM,a mangrove protection organization. He stayed in the city for over a year, but hated being away from his family, his community and his land. He returned once it was safe and re-immersed himself in his regular life.

Upon his return, he tackled one of the biggest threats facing his community – the invasion of the shrimp farm industry. Again, Máximo describes the wave of violence: “The shrimp industry, in order to get our land to make shrimp farms, they killed our brothers and sisters: our clam collectors, crab harvesters in the entire coast of Ecuador. There are shrimp farms where they used to be cemeteries. In entire villages, they kicked the people out to put a shrimp pond.” In response, the community organized and mobilized with national and international movements. They did keep the industry at bay, as there are fewer ponds in his region than elsewhere on the coast. As with the palm plantations, the shrimp industry is in cahoots with the government. The politicians have a stake in the shrimp industry and they enact the laws that govern them. Not only do the farms pollute the waters with chemicals, seize and displace entire communities, but they also decimate livelihoods. While one mangrove hectare (2.47 acres) in a natural state supports ten families, one 100 hectare (247 acres) shrimp farm supports three families: those who feed the shrimp, those who take care of the shrimp and the owner.

Additionally, after several harvests the water is too polluted to continue farming, so they move on and destroy more mangroves. People have no choice, but to resist, as Máximo explaines, “The mangrove is the source of income for clam collectors and crab harvesters. If they cut the mangroves, the bio-aquatic life is gone. People put their bodies on the line to protect the mangroves. At the end, the industry wins, because they always end up killing clam collectors or crab harvesters.

“For us, they are destroying the entire territory. They leave us without territory, without jobs, without food. The main problem is ecosystem destruction and we blame the people from North America because they want to eat shrimp. The shrimp farms are subsidized through World Bank credits and that money that finances the shrimp farms is going to be paid by all Ecuadorians in order to cancel the foreign debt. We continue to fight the expansion of shrimp farms and it is a war that is never going to end. So, for us, it is important because life starts right here for the People of the Mangroves. I will die before I leave the mangroves.” Máximo serves an entire meal 100% dependent on the land and water. That is what he calls food sovereignty and is what he fights for: “The traps caught the crabs, the other traps caught the rats and the net caught the fish, the earth gave us the coconuts, the oregano, chiles, spices to cook the meat. The water is from the well. That is why our struggle is in the defense of the territory. Territory is not just a piece of land. It is water, plants, trees, animals – biodiversity. Without territory, we cannot practice food sovereignty.”