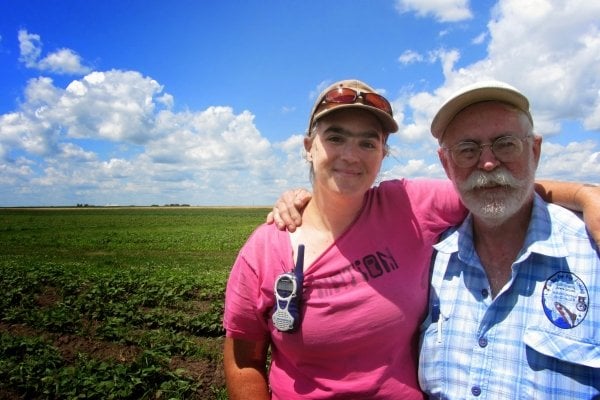 Farmers tend to be traditional and resistant to change—”they’re the last to throw out the old,” says Molly. It’s for good reason: weather makes farming inherently risky, and it’s the rare farmer who wants to take on further risk when failure could cost their annual livelihood. Even the change to today’s large-scale, mechanized, industrial farming model happened over decades; to shift away from that to an environmentally and economically sustainable model may take even longer, given the policy frameworks and individual farmers’ investments that maintain the current system.

In many parts of rural America, farmers who vary from the corn-and-bean norm—whether growing organic, alternative crops, or even simply using conventional corn and bean seed instead of genetically modified—are looked at a little askance. Change can occur in a community, though, when the neighbor who is doing something different has clear success. Since each growing season takes a year, it’s a slow process, but it can happen.

The Breslin farm is surrounded by the fields of two long-time family friends and Molly’s uncle. “I don’t think we’d be doing this at all if not for my uncle,” says Molly. He’s a conventional farmer, reliant on herbicides and genetically modified seeds, but he gives advice, helps out and loans equipment. Last year, he gave them 20 acres that were not producing good corn yields for him, suggesting Molly and John transition it to organic.

Molly’s uncle remembers a different kind of farming; his father used to farm with horses, raising pigs and a few dairy cows on a diversified farm with a small orchard. He and the Breslins’ other neighbors grow corn and beans now, but they are watching Molly and John with interest and respect. They don’t spray their fields when the wind is wrong, and they let their young children and grandchildren work on Molly and John’s farm because the Breslins don’t use chemicals. John says, “The older guys, in my generation—they’re never going to switch. They grew up using chemicals, that’s all they know; I can respect that.” But, he says, the farmers in Molly’s generation are looking at the price difference in soybeans (organic sold for more than twice the price of conventional in 2014, according to John) and the Breslins’ superior yields in the 2012 drought, and are starting to ask questions about cover crops, soil amendments and other practices outside of today’s conventional farming norms.

Molly and John’s goal is to grow food for people—unlike the surrounding corn and soybeans, which go into animal feed, ethanol and processed foods. A significant additional goal, says John, is to be “a demonstration to show people that you won’t grow broke if you farm row crops organically in northern Illinois. Maybe we can be a benefit for farmers generally.” With smart farming practices and good neighborly relationships, Breslin Farms is well on its way to meeting both goals.