First World Hunger Revisited: Food Charity or the Right to Food? examines the failure of neoliberal economic policy and globalization to adequately address hunger amidst wealth. The first edition was published in 1997, and this new, expanded second edition demonstrates that current economic policies continue to be root causes of hunger. The book is a collection of essays edited by Graham Riches and Tiina Silvasti from writers in twelve countries— Australia, Brazil, Canada, Estonia, Finland, Hong Kong, New Zealand, South Africa, Spain, Turkey, Britain, and the US— with advanced or rapidly developing economies that nonetheless have persistent high rates of hunger. 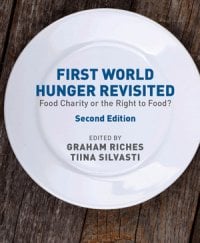 What is striking when reading a survey like this are the similarities. There are, of course, unique historical, cultural, and religious influences; for example, the dimensions of Confucianism, authoritarianism, and colonialism in Hong Kong or the loss of access to traditional foods by First Nations communities and Aboriginal peoples in Northern Canada. But in the interest of perpetual growth, these governments focus on trade to pay debts and balance budgets, rather than income inequality.

Each chapter describes impoverished populations, multiple issues conspiring to create structural poverty and, increasingly, the insufficient government response to solve the problem, as well as a reliance on charitable food to plug the holes. Charitable food becomes more celebrated and corporatized as time goes on, and more entrenched as a response to hunger. This serves to further deflect the responsibility of governments to respect, protect, and fulfill the Right to Food (RtF). RtF is both an idea that inspires action and a global legal framework for coordinated reform in food and agriculture. The authors call for a “‘joined-up’ food policy,” that is, a comprehensive and integrated food policy that addresses the often disconnected but interrelated policies of social welfare, public health, agriculture, trade, and environment. Imagine, for instance, that the Farm Bill, the Child Reauthorization Act, and the Affordable Care Act were part of a coordinated and deeply interconnected policy.

In the case studies, we see time and again how neoliberalism fails the majority of us. There is overproduction of food, but hunger persists. Income inequality grows at an alarming rate. Democracy erodes. This pattern supports Riches and Silvasti’s argument in the concluding chapter:

[Governments] pleaded the case of fiscal restraint and social spending cutbacks as necessary responses to the weakening economic and political power of nation states and their need to ensure international market competitiveness in the face of global labor market deregulation, economic restructuring and free trade. It led, inevitably, to the vicious cycle of further social spending cutbacks. Work was announced to be the best social policy and welfare benefits were attached increasingly to labor market participation. The problem was that these societies were not able to generate sufficiently well-paid jobs for ordinary people to earn a living wage, and many were unable to put food on the table.

In an age of austerity cuts, First World Hunger Revisited is an indictment of neoliberal economics and its consequences.

In the chapter on Hong Kong, authors Kwong-leung Tang, Yu-hong Zhu and Yan-yan Chen reference Drèze and Sen’s Hunger and Public Action, which describes “collaborative” and “adversarial” activities to address hunger. That is, “The first involves collaboration with government programmes, while the second emphasizes public demands on the government and alternative policies.” The authors caution that the “activities of the state could easily deteriorate in the absence of public vigilance and activism.” Throughout the book, we see how the public and media perception that “accept[s] charitable action as successfully managing the problem [of hunger]”— even when overstated— further relieves the government of responsibility and lulls the public into complacency. 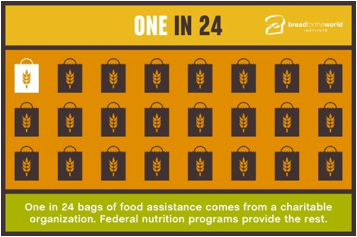 The case study of Brazil provides a notable exception. Extreme poverty fell an “extraordinary” 8.7 percent from 2001 to 2008 and it is the only country in which income disparities actually decreased. This is largely due to the integrated Zero Hunger strategy, which seeks to address food access, strengthen family agriculture, increase income generation, and build partnership and civil society mobilization. In Brazil, “Food insecurity is also often identified with market failures, and food security is seen as a public good. As such, there seems to be among Brazilians little reluctance to accept the need for government intervention in the food system, particularly in areas to address social inequities.” There is also the concept of cidadania (“roughly translated as ‘participatory citizenship’”), “the idea that to be part of Brazil, people have rights and responsibilities.” The advances in Brazil provide inspiration and a roadmap for other nations to adopt a right to food approach.

In the US chapter, academic, author, and WhyHunger board member Jan Poppendieck deftly traces the history of food assistance from its agricultural policy background to food banking. As a primer to the political calculus of US food policy, this chapter is essential reading for students, anti-hunger advocates, and food pantry participants and volunteers. Poppendieck is cautious about the RtF approach in the US, citing the concept of American sovereignty or exceptionalism (which led to not ratifying non-binding international human rights agreements), the lack of public discourse on human rights and focus on “negative rights,” and the more immediate focus on preserving the vulnerable SNAP program. While Poppendieck— and Riches and Valerie Tarasuk in the chapter on Canada— mention the existence of a RtF critique in North America, both could put more emphasis on an increasingly skeptical and vocal critique of the status quo in charitable food, whether from Closing the Hunger Gap or Witnesses to Hunger in the US or Community Food Centres Canada, the Stop, or Freedom 90 in Canada. Perhaps this is because those conversations remain largely insular, and have not yet reached the level of public debate.

Overall, First World Hunger Revisited effectively demonstrates that emergency food distribution is a necessary result of and a problematic response to neoliberal ideology. The collection invites the reader to ask even more questions. What is happening in Germany, which has invested in skilled labor, or Russia, which has extreme income inequality? How could a right to food approach transform the charitable food sector and inadequate government policy? What would that look like? And what would it take to get there?