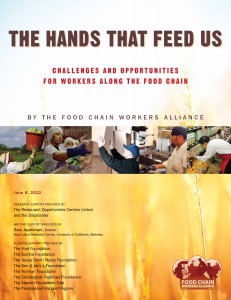 WhyHunger congratulates our partner, the Food Chain Workers Alliance, on its groundbreaking new report, The Hands That Feed Us: Challenges and Opportunities for Workers Along the Food Chain. It’s the first-ever comprehensive report looking at wages and working conditions of workers across the entire food chain – a sector that employs 20 million people in the U.S., comprising one-sixth of the nation’s workforce.  The report exposes that food workers face higher levels of poverty and food insecurity than the rest of the U.S. workforce, while facing discrimination, abuse, and other forms of exploitation.

The report was launched at yesterday’s Food Workers and Food Justice Conference in New York City.  WhyHunger participated and had the opportunity to hear directly from restaurant workers, meatpacking workers, warehouse workers and others. Many have faced unbelievable abuses on the job and were courageously speaking out and joining with other workers across the food chain and allies to bring about change.  These first-hand stories of workers, which are also reflected in the report, are a stark reminder of how far we have to go to achieve a truly fair food system—but are also a testimony to the resilience and capacity for change in those who feed us.

WhyHunger commits to strengthening our solidarity with food and farm workers and encourages everyone in our network to join us.  Raising the minimum wage, supporting paid sick days and enforcing penalties for wage theft are simple policy changes that would have a big impact on reducing hunger and poverty in this country. Read the report, spread the word, and join food chain workers in their struggles for a food system that is fair for all.