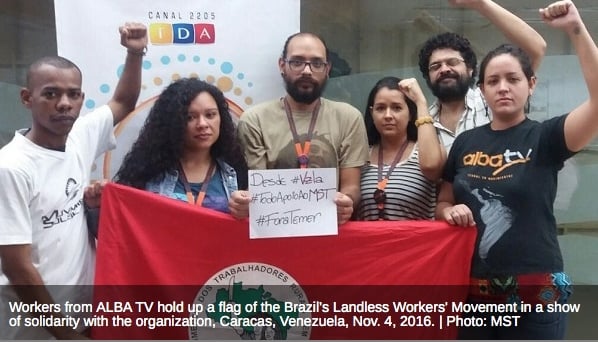 The below statement was drafted by Maria Luisa Mendonça of the Justice and Human Rights Network (Rede Social). WhyHunger stands in solidarity with our partner, Landless Workers Movement (MST), and has signed this letter along with the National Family Farm Coalition, Grassroots International, Maryknoll Office for Global Concerns and others. Please read below to learn why this is important.

Early on the morning of November 4, an estimated 10 vehicles full of armed civil and military police raided the Escola Nacional Florestan Fernandes (ENFF) in Guararema, Sao Paulo, detained several MST members and waved their weapons and fired live ammunition. The school is owned and run by the Landless Workers Movement (MST). The brutal action is part of an illegal crackdown operation against the MST spanning three states – Parana, Matro Grosso do Sul and Sao Paulo.

In another operation against an MST camp in the state of Paraná, six other local MST leaders were detained for unknown reasons.

The MST was created over three decades ago and is Brazil’s largest social movement dedicated to peacefully defending small farmers’ access to land. The MST has assisted hundreds of thousands of peasant families in gaining land for farming with the support of articles 184 and 186 of Brazil’s 1988 Constitution. The MST has also played a central role in the peaceful protest movement opposing the anti-democratic removal of former President Dilma Rousseff from office earlier this year.

The Escola Nacional Florestan Fernandes campus was financed with donations from notable figures such as Brazilian musician Chico Buarque, photographer Sebastião Salgado and the Portuguese Nobel Prize winning author José Saramago. Hundreds of Brazilian and international intellectuals, teachers and artists have regularly contributed lectures, courses and teaching materials to the school. The Escola Nacional is a symbol of solidarity to the rural movements in Brazil that advocate for the democratization of education and land.

The raid of the school by armed police was carried out without a warrant. According to reports, police arrived around 9:25am with a supposed warrant to arrest two individuals who weren’t present at the school. Police agents climbed over the reception gate and shot multiple rounds. Based on the bullet casings found at the scene, the police used lethal bullet rounds – not rubber.

According to the MST, two members of the movement were detained and subsequently released a few hours later. Those detained were the singer Gladys Cristina de Oliveira and 64 year-old librarian Ronaldo Valença Hernandes, whose rib was fractured during the incident.

State-led attacks against the MST began escalating during the month of September when several members of the MST were arrested and accused of being part of a “criminal organization” under Brazil’s Law of Criminal Association.

We call for an immediate end to the repression and criminalization of the MST and other grassroots organizations in Brazil, and for the release of all those arrested on groundless charges.

Advocacy for land rights and peaceful protest are essential rights that are protected under Brazil’s constitution and that must be respected by all Brazilian authorities.