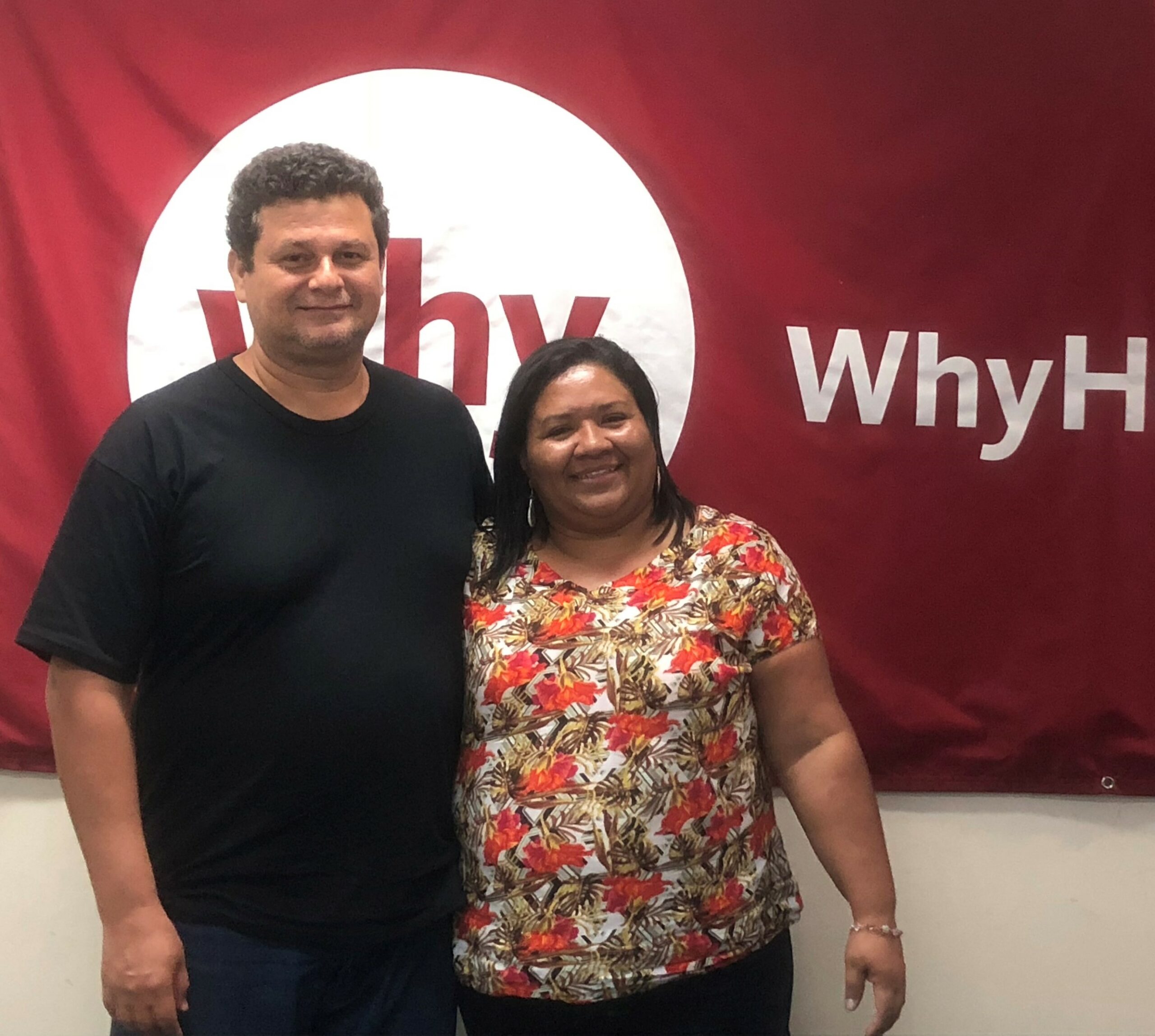 Introduction
From resisting displacement to advocating for fishers’ rights, Brazilian fisherfolk have long engaged in actions of resistance to protect their land and communities. In September, two members of WhyHunger’s ally, Movimento de Pescadores e Pescadoras (MPP), or the Movement of Artisanal Fishermen and Fisherwomen, visited the WhyHunger office in New York City. Together, Ormezita Barbosa, the general coordinator for MPP and Marcos Brandão, a lawyer working with Conselho Pastoral dos Pescadores (CPP), or Pastoral Council of Fishermen, spoke about the challenges they face and the aspects of their work that continue to give them hope. Over the course of the afternoon, they portrayed a legacy of resilience that endures in MPP’s struggle today.

A History of MPP
The history of MPP begins with the crucial formation of CPP in the late 1960s. During the democratization of Brazil, members of church groups joined together to confront the invisibility of fisherfolk communities across the country. Concerned specifically with artisanal fishers and their struggle to make a living, they helped grant basic workers’ rights to fishers, including retirement and social security. After nearly a decade of work, struggle and declining membership, a new reinvigorated movement emerged in 2009 when fisherfolk organized a meeting that ran parallel to the government’s Conference of Fisheries in Brazil. There, artisanal fishers committed themselves to an autonomous, national fisherfolk group, that eventually resulted in MPP’s formation.

With CPP’s support in the formation process and trainings of new members, MPP’s momentum has continued to grow. Its national reach is broad and they are now present in 19 of 26 states –  even more than CPP. They have also established commissions addressing projects focused on fisherfolk territories, human rights, training and education, and sustainability.

MPP and the Right to Food
Today, MPP’s work can be framed as part of the ongoing efforts to achieve the right to food around the world. Broadly understood as “the right of all people to be free from hunger and to have physical and economic access at all times to sufficient, nutritious and culturally acceptable food that is produced sustainably, preserving access to food for future generations,” MPP identifies with this concept in a way that extends beyond food security. Barbosa explains, “Artisanal fishing represents, in a lot of ways, the right to food and the type of food that the right to food talks about because it’s clean, it’s not processed, it’s not full of chemicals, it’s artisanal.” But, Barbosa says, there isn’t a large culture of fish consumption in the communities because much of it is exported, raising questions about how communities can work to “provide food for themselves…[and] to make part of the discussion about being more self-sufficient with regards to the food that is being produced.”

Essential to this right is access to the land that supports communities – ensuring they can retain self-sufficiency and build food sovereignty, while honoring history. Though they are food producers, people are increasingly recognizing fisherfolk’s fight for the recognition of cultural heritage and ancestral knowledge, both of which are intimately tied to the land on which they live. These sites remain important aspects of their identities. But despite strides made by these fisher groups over the years, the marginalization of Brazil’s fisherfolk and, consequently, efforts to restrict access to their land, has not stopped.

In fact, Barbosa notes that since the 2016 institutional coup, when President Michael Temer took office after a political maneuver to impeach the democratically elected Dilma Rousseff, it has become more difficult for the fisherfolk MPP works with. Prior to Temer’s administration, the government recognized a family’s ownership of ancestral land and was obligated to regulate and enforce protections of territory. But in July of this year, a new rule stated that land can only be designated for indigenous people if it was occupied in 1988, the year Brazil’s constitution came into effect. MPP members and other social movements fear it will be nearly impossible to prove such claims. Instead, as large businesses in agriculture or other fields seek more land for commodity crops or the construction of new ports along river, an increasing number of families will lose previously-designated titles to their ancestral land.

Since Brazil’s recent election of Jair Bolsonaro in October 2018, activists fear that the situation will only worsen. An anti-environmentalist, Bolsonaro has aligned himself with agribusinesses, loggers and miners, and there is real concern that he will systematically enable violence against indigenous groups and their territories. Already, he has identified groups such as the Landless Workers’ Movement (MST) as terrorist organizations and has vowed to abolish all ancestral lands. These actions will have severe consequences for fisherfolk, who now face further violence and displacement, and will only intensify the need to organize.

Once communities are forced from their land, they often struggle to provide sufficient food for themselves and their families. Not only do they lose fishing access, but they also are forced off of the land many relied on for subsistence farming to feed themselves and their families. “The displacement of people from their territories means that suddenly they can no longer plant food,” Barbosa explains. “And now they have to buy food but they don’t have any money.” Complicating matters further, even if communities are not displaced, they often find that the large industrial companies that have moved into fisherfolk territories are polluting waters. The water, in turn, contaminates the fish they produce and the crops they typically consume, making it increasingly difficult to remain in these areas.

Yet, even as violence against fisherfolk continues, MPP remains optimistic about their work. “There is hope as long as people continue struggling,” Barbosa states. Despite the fighting and stress, as communities work to protect their land and cultural heritage, they are moved by small changes. These, they believe, sustain them as they work toward their goals.

As they grow and continue their work with fisherfolk nationally, MPP hopes to amplify the voices of members and turn the public’s attention to their fight against water and land contamination, and the human rights violations committed against displaced communities. Partnerships with allied organizations such as WhyHunger can help further this reach. Not only do these alliances provide mutual enrichment, but “being able to engage with other groups and other alliances allows for that visibility of issues affecting fisherfolk to increase,” Barbosa says. As the struggle continues, there remains hope that reclamation of their territories is possible. “With the organizing of groups like MPP, things are fragile,” Brandão says, “but people still have vigor. Wins are important because people are able to hold onto their land.”