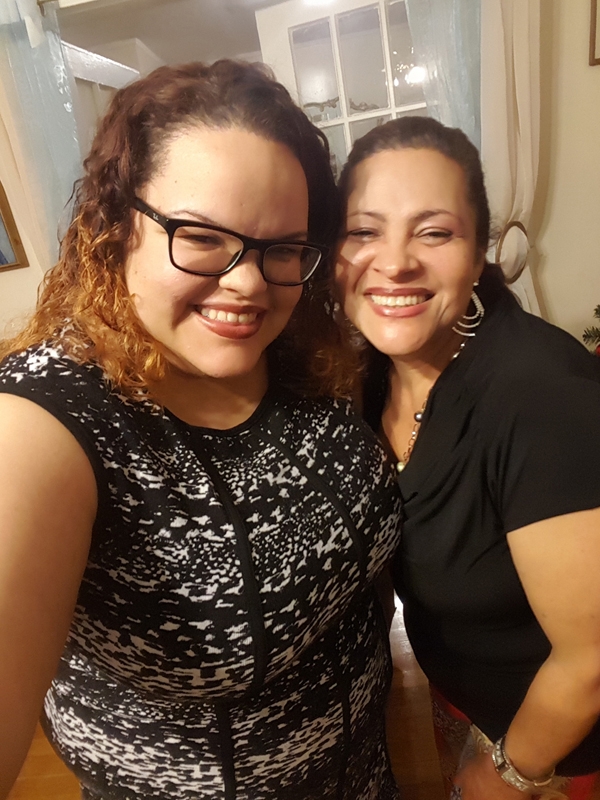 My name is Betty Fermin and I work at WhyHunger for the Nourish Network for the Right to Food. As part of my work I talk to people on our WhyHunger Hotline who are looking for food and manage the Nourishing Change newsletter which provides a space to share critical thoughts around the systemic change that needs to happen to end hunger and transform the emergency food system. Since I’ve started writing about how to transform the emergency food system, I have been thinking more and more about my personal connection to this work. The deeper I delve into the work I do, connecting people to food in their area nationwide and sharing information on this growing movement; the connection to what’s always happened at home is something I have begun to think about more.

Growing up, I always knew that my parents worked hard but they just did not make enough to buy food for our table. I’ve stood in line to get SNAP (formerly food stamps) with my mother many times so she could get that extra help to stretch the food budget for my mother, father, brother and I. In recent years, my mother has begun to go to a food pantry just to get some extra help. She recently told me that there hasn’t been a day in the last fifteen years when she felt like she made enough money to have a good amount of food on the table.

My parents both work in the school food system. My mother is a lunch lady at an elementary school and my father brings the food to different schools, so they are an important part of getting children fed and play an active role in our food system. But the irony is that as they help provide nutritious food to hundreds of kids, they themselves don’t make enough to feel secure or meet their basic needs. Now that I am working for an organization that is trying to end hunger, I’ve tried to share my work experiences with my mom. My mother is from Dominican Republic so I have to translate everything to Spanish to make her understand what I do, which can be a bit difficult. After one of these conversations, I decided to sit down with her to ask her some questions about her job, the emergency food system and what she thinks needs to happen for systemic change to actually occur.

I began by explaining what stigma means and asked her if she believed there’s a stigma when it comes to people seeking help from the government?

She understood stigma as discrimination and believes that it’s definitely a factor for people seeking help. She felt strongly that people need help since so many don’t make enough money to make ends meet. So even if there is the stigma there, she believes that it’s a necessary evil and it’s just a balance of knowing what’s out there and what’s good for you.

I then asked her how she felt as a person who gives food to the children and is such an important part of their day, while not having enough for her own table?

She told me that she thinks this question makes the process of seeking help seem negative. She explained that, sure it can be thought of as a negative thing, but if you need the help and it’s there then there’s no need to feel bad about looking for it and using it. That is the irony of life, that I work in food and also have to seek help for my own food. “Esa es la ironía de la vida que uno trabaja en comida y también tienes que buscar ayuda.”

She explained, “yeah and just like anything that helps people, people can take advantage and just have food piled up in their houses which isn’t good. The good thing is that places like that are considerate at least the one I go to is and if you don’t want a certain can or box you can leave it for someone else. I take what I need, not just to have it sitting in my house.”

That’s a point that made me think because while I help people just locate a food pantry in their area, the politics as to what happens inside each food pantry is particular to each place. I told her about the work that Bed-stuy Campaign Against Hunger is currently doing with their small choice pantry, in which the clients shop in a pantry that looks like a store and have a choice as to what they can take home. The healthy food tends to go first and then the cans and boxes. Often an assumption is made that people that go to these places don’t care about their health, but that isn’t really the case. While they are trying to get fed, it’s important that the food they get isn’t high sugar, high sodium and empty calories to just fill bellies but to nourish them in a way that is healthy and just.

Someone that has been fighting for change when it comes to school food is Michelle Obama and that’s something I remember my mother commenting on specifically over the last five years when it comes to how it affected her work, so I asked her, how much have you seen the school food program change since Michelle Obama instituted the healthier changes?

She told me, “There has been a lot of change! Now there are salads and many meals come with vegetables on the side such as carrots and celery. They give water and don’t give sodas. It’s a good change because it’s encouraging kids to drink water and just be healthier. These changes often create more work for us staff, as the food is made fresh in most cases instead of being brought from a factory where it came prepared or pre-packaged, which of course benefits these students in that they’re getting the healthiest food, so it’s not something I’m mad about. It means that there is more food with less salt and more fruits and vegetables. While the favorites like pizzas and burgers are still on the menu, us lunch ladies make them with healthier ingredients.”

I asked her, what she would want someone who has never had to worry about having enough to eat to know about what it’s like?

She explained, “I don’t really think about it because I think people also go to those places so that they have enough money for other expenses such as bills and rent. Life is expensive and when what one makes isn’t enough to get by, it’s comforting to know that pantries are there to help.” “ Es una ayuda para uno.” She said she thinks it’s important to keep talking about healthy food and to keep healthy food accessible so it is available for those that want it and not at crazy price.

I asked her if she knew about the Fight for 15 and if she thought it would create lasting change?

“The Fight for 15 is good in theory but I am worried that then everything else will go up too; rent, bills and unions will raise their dues. It’s a struggle because I’ve been working for over 15 years and worked for every raise that I’ve got. While I do make around $15 an hour, it would be pretty life changing for anyone starting off in this or any other job to start off with $15 an hour. Of course anyone that believes they should make more should fight to make more and that’s great, but I’m interested in the effects that it will have in the prices of everything else.”

Then I asked her what she thinks of my decision to work in the “anti-hunger” space?

She told me, that she feels good that I am helping people and that it’s part of my work. She said she just wishes for me to go far, farther than I even think possible.

I followed up by asking her, what gives her hope?

She said that she believes that one day there will be a nice future; one with peace and tranquility. For the world to change for the better, for there not to be hunger one day. “I think it has to come from the people. The way people think has to change so that they can effect change.”

I learned a lot about my mother from this interview. We both are very positive people and I think I get my belief from her that, while things are difficult there is still a possibility for change to occur.

I think the most eye-opening thing for anyone that is reading her story, and even for myself, is the tendency we have to think of needing food assistance as a negative thing and something someone would have to hide. There’s this shame that’s been associated with getting help from places like food pantries or from SNAP and my mother has made me realize that there’s no need for that.

I grew up not worrying about food because my parents had it covered. At least I believed they did, because they never showed any signs of worry even when they clearly were getting outside help. Having grown up using these programs, I did not ever think that people thought of them negatively until I began to work in the anti-hunger space and saw how much partners have to advocate in order to keep them around. I think that is very telling of the difference between the people working to “get rid of SNAP” and the people using these food assistance programs; the difference being that the people using it don’t think of it as leeching off the government, they genuinely need this help in order to get food for their family. It’s a needed resource. There is no other option but to use these programs and I’m grateful that my parents had that extra help and that so many others do nationwide.

These resources are a helping hand for so many people and something I am proud to help people access. While it’s difficult to build that positive narrative when even the government is constantly trying to cut SNAP and other food assistance programs, I think it’s important for stories like my mom’s to be lifted up to show just how essential they are for folks across the country.