We told you two weeks ago that the Food and Farm Bill was finally moving again, and there’s been a lot of activity since then: the Senate and House Agriculture Committees each passed a version of the Bill, and the full Senate began debate on their version last week. Congress has been on break this week, but the Senate may continue its debate next week (the schedule is uncertain because lawmakers are also working on immigration reform).

Both the Senate and House versions of the bill include deep cuts to SNAP (formally known as food stamps), which would be particularly devastating for families still struggling with the effects of the economic downturn. The Senate aims to cut $4.1 billion and the House $20.5 billion. We read two pieces this week laying out out clear arguments for why we must strengthen the safety net, not cut it. 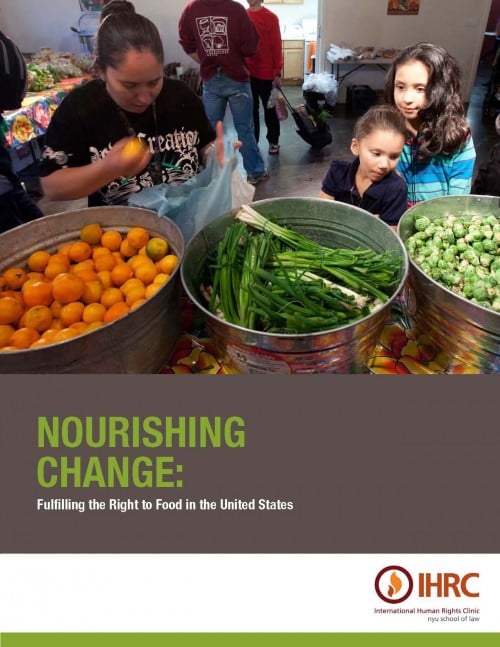 Nourishing Change: Fulfilling the Right to Food in the United States is an engaging and important new report from the Center for Human Rights and Global Justice at the NYU School of Law, punctuated with emotional stories of people facing hunger and reflections from those who have been working to end hunger for years (including WhyHunger’s Senior Director of Programs, Alison Cohen). Looking at the US response to hunger through the framework of the right to food, the authors recommend that that government must adopt a new approach to the problem: “Food insecurity in the United States is not the result of a shortage of food or of resources; it is the result of poverty and of policies and programs that fail to prioritize the needs of low-income Americans. Despite the magnitude of the problem, and its far-reaching implications, eradicating food insecurity has not been a political priority. Instead of addressing critical gaps in food assistance, the U.S. government is considering severe funding cuts and other reforms to [nutrition programs] that could strip millions of Americans of crucial support, exacerbate already alarming rates of food insecurity, and push families into deeper crisis.”

From the Mouth of Babes, Paul Krugman, New York Times Pointing out that “the evidence is crystal clear both that the overwhelming majority of food stamp recipients really need the help, and that the program is highly successful at reducing “food insecurity,” in which families go hungry at least some of the time,” Krugman issues a call to arms: “Every once in a while… politicians do something so wrong, substantively and morally, that cynicism just won’t cut it; it’s time to get really angry instead. So it is with the ugly, destructive war against food stamps.”

We agree: it’s time to get angry, and we need to let our legislators know.

Reach your Senators and Representatives by calling the Capitol switchboard at (202) 224-3121. Urge them to reject any further cuts to SNAP in the Food and Farm Bill – and to support amendments to restore SNAP funding. For more specifics, check out FRAC’s action page.

Many other important provisions are still in play in the Food and Farm Bill debate as well. To support small, beginning and minority farmers, conservation, local farms and much more, check out the National Sustainable Agriculture Coalition’s action page and include those messages in your call as well.

For more ways to keep up with the Food and Farm Bill and take action, see our suggestions here. 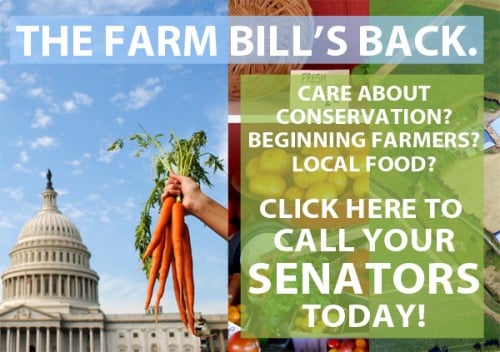