WhyHunger is honored to be co-hosting the 5th annual Food Sovereignty Prize ceremony in New York City today!  Organized, sponsored and awarded by the US Food Sovereignty Alliance, this year’s prize has particular resonance as the alternative to the World Food Prize.  The World Food Prize, since 1986, has primarily promoted increased food production through technology, whereas the Food Sovereignty Prize champions agroecological solutions coming from communities most impacted by the injustices of the global food system who, in many cases, risk their lives in order to stay connected to the land that nourishes them.  In sharp contrast, this year’s World Food Prize laureates include three scientists – one of whom serves as an executive vice president for Monsanto – all of whom are being singled out for their contributions to ending world hunger through the field of “agricultural biotechnology” – particularly the development and proliferation of genetically modified seeds and plants.

The absurdity of this has not been lost on the US Food Sovereignty Alliance and the many communities and organizations around the world who struggle to protect the land, water and soil from GMOs and multi-national companies whose science and business practices threaten not just farmers’ livelihoods but their long-term prospects of feeding their families. The 2013 Food Sovereignty Prize is choosing to honor four rural community-based organizations from around the globe that are reclaiming control over how their food is grown, what they produce and how their communities access  it.  The primary honoree for this year’s prize – the G4 – is a direct foil to Monsanto and its proliferation of GMOs around the world.

In 2007, Haiti’s largest peasant organizations—Heads Together Small Farmers of Haiti (Tet Kole), the Peasant Movement of Papaye, the National Congress of Papaye Peasant Movements, and the Regional Coordination of Organizations of the South East Region—joined forces as the Group of 4 (G4), a national alliance to promote good farming practices and advocate for peasant farmers. The G4, representing over a quarter of a million Haitians, invited South American peasant leaders and agroecology experts to Haiti to work cooperatively to save Creole seeds and support peasant agriculture. The Group of 4 made global headlines when they rejected a donation of hybrid seeds from Monsanto. 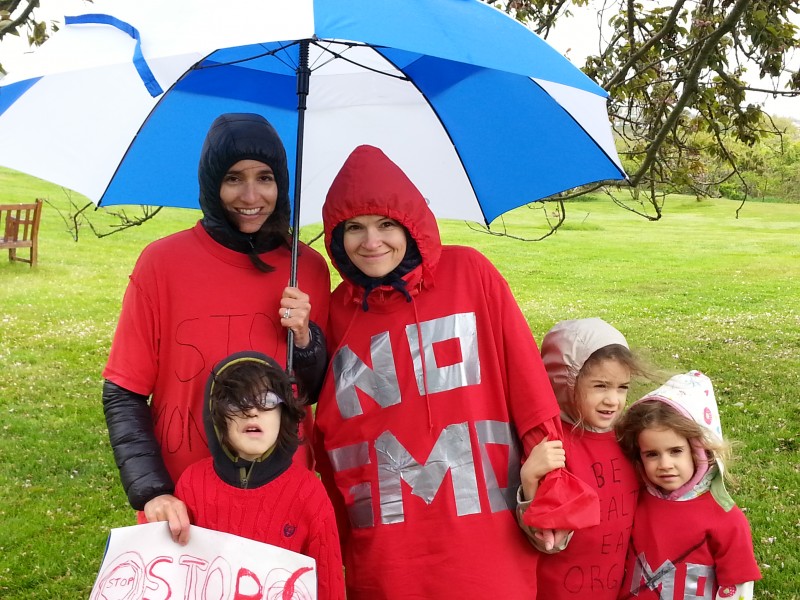 It was therefore fitting when I recently learned that one of WhyHunger’s board members, Nanette Johns, has been actively organizing her own community in Montauk, New York to ban GMOs. Her motivation is health-related, but stems from a similar passion and fierceness that many of our grassroots partners express when they describe their own efforts and struggles. They want what’s best for their families, they want to protect their children and their livelihoods. While Nanette did not risk her own or her family’s life in planning and carrying out her march and it didn’t make headline news internationally, it struck me nonetheless as an act of solidarity, a tenuous and perhaps symbolic thread connecting the Global North and the Global South in the fight to take back our food system. As Joel Green, a Wisconsin dairy farmer and member of Family Farm Defenders (a 2010 Food Sovereignty Prize winner) said: “Food sovereignty is about fair trade, international security, energy independence, all that, but it really starts with you – where you buy your food, how you take care of your neighbor. It’s that simple.” I think Nanette would agree.

Here is Nanette’s account of her rainy day march in Montauk to ban GMOs:

March on Monsanto in Montauk, May 2013

By Nanette Johns, physician and WhyHunger board member

Being a second generation chiropractor, I feel I was born to heal others, prevent illness and promote wellness.  I always lived by the belief that the body has an innate ability to heal itself and the cleaner the body, the stronger the immune system.  Then I became a mother of three children, and nutrition came into focus as one of the best ways to maintain health.  So when I heard about Genetically Modified Organisms (GMOs) and then learned that the U.S. has no laws that require labeling of these modified foods, the fire began to burn inside of me.  How can our bodies possibly digest something that is modified??? And what are the health consequences of this??? How will modified seeds affect the integrity of our soil and will modified crops cross contaminate our pure crops?  Then I learned that many other countries have either banned GMOs or required labeling of genetically modified foods over 10 years ago, and the fire burned brighter.  How could I heal others if they are eating food that can make them sick?  Without labeling, how can people make informed decisions about the food they eat?

I found the perfect way to put my passion to work.  In May  2013, my sons and I and a dear friend and her daughters proudly put on our red shirts, held our anti-GMO signs high and marched on Monsanto in Montauk, New York.  It was a cold, rainy and blustery day, and it took all our strength to hold onto our homemade signs and umbrellas until we reached the Montauk Community garden where our march culminated with a special blessing of our land and organic vegetables.  We all held hands in a circle and listened to a sacred American Indian chant.  Tears filled my eyes as I looked at my children and thought how they deserve the right to clean air, water and food. There is a lot of work to be done, but every voice will make a difference and a healthier world will be the end result.  My children and I will never forget this special day, and when my four year old son says, “Mom, say no to GMO,” I know that I am doing my job as a Mom AND a physician. 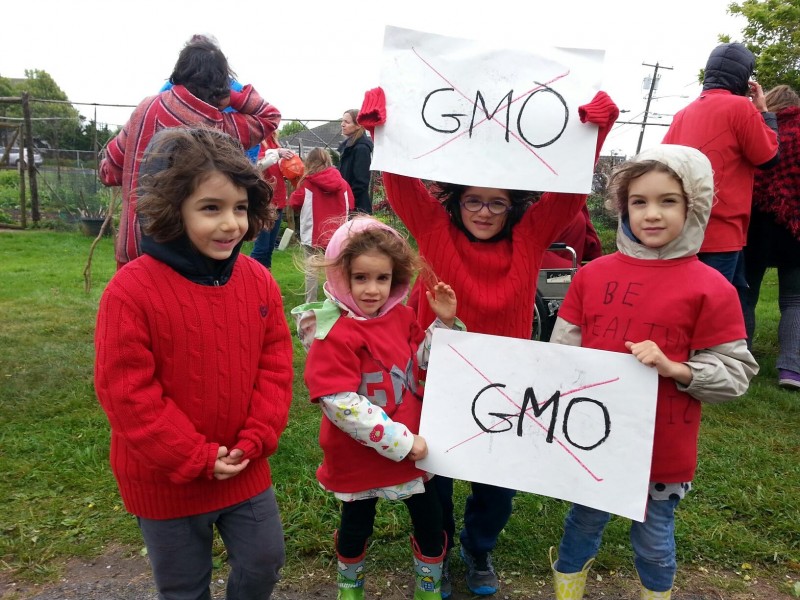