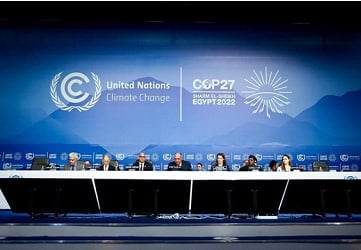 This year’s anticipated COP was hosted in Sharm el-Sheikh, Egypt and dubbed “Africa’s COP”. With the UN Secretary General, António Guterres, calling for COP27 to “deliver a down-payment on climate solutions that match the scale of the problem”, many followed the discussion intently to see if food system leaders could truly deliver. Representatives from nearly 200 countries gathered for a two-week long negotiation on how to tackle current climate issues
amidst frequent extreme weather events and the ongoing war in Ukraine. However, politicians and diplomats are not the only ones that have something to say. In the wake of COP27, many grassroots groups and organizations are speaking out on the impact of climate change and industrial agriculture on our food system and our communities.
WhyHunger would like to highlight the powerful words from our partners at World March of Women and WAMIP (World Alliance of Mobile Indigenous Peoples). In response to COP27 convening, World March of Women published their thoughts on the importance of feminism in climate justice titled “#COP27 WMW Positioning: No CLIMATE JUSTICE without FEMINISM”. Their statement explains how women in poorer countries are disproportionately affected by climate change, stating “poor women in rural areas and indigenous women are more dependent on natural resources for their survival” as they are usually the ones responsible for cooking and caring for the young and elderly. The cause of this boils down to “the capitalist mode of production and the consumer model that goes hand in hand with it.” World March of Women is pushing to transform these structures into one that utilizes “the perspectives of class, race, sexuality, and gender”, arguing that a feminist approach to climate justice is necessary.

World Alliance of Mobile Indigenous Peoples launched a publication alongside allies at Transnational Institute titled “Livestock, climate and the politics of resources”. This primer highlights pastoralism: a sustainable, low-impact method for livestock-keeping that involves nomadic herding patterns. Pastoralism has ancient origins and is seldom seen in this country due to colonization and extermination of pastoral indigenous peoples. We are now left with modern-day commercial ranches consisting of livestock crowded into confined pens. This primer dispels any myths about pastoralism and provides great insight to its benefits, stating that it “plays a critical role in protecting environments, sequestering carbon and enhancing biodiversity”.
Although COP27 generated a variety of responses, one thing can be agreed upon—every country must work together to fight this climate crisis. This is not a battle that can be won alone. As UN Secretary General António Guterres put it, “we can sign a climate solidarity pact, or a collective suicide pact.”

Krystal is the WhyHunger Communications intern. She has a background in nutrition and dietetics and previously worked as a school dietitian in Union City, NJ.  She is interested in social media marketing and graphic design. When she’s not working, Krystal spends her time cooking or looking for the best restaurants to eat at!